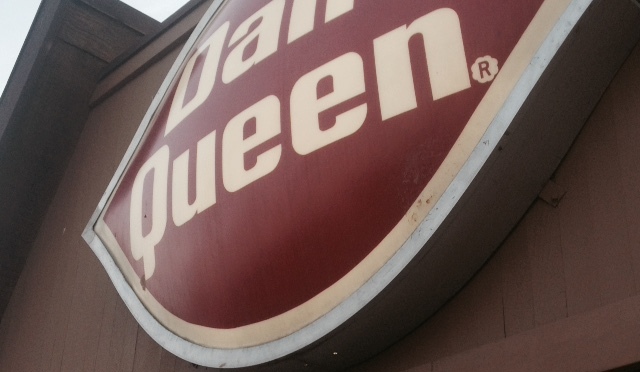 I think it’s pretty easy to see that fast food places like advertising to stoners and students. You can tell that these restaurants are doing this when in one of their commercials a group of bros appear at a gathering with a box of tacos and then the party really gets started, or when some dude suddenly transforms into a puppet. However, I can’t tell who Dairy Queen’s target market is. Commercials for DQ straddle a line between friendly and stupid, so they attempt to appeal to everyone, but fail to establish a strong personality. These ads are few and far between and they’re probably more frequent than actual DQ storefronts. I can’t even remember the last time I went to Dairy Queen, but more than likely it was to get ice cream, not a lunch. With so few locations and a damn near invisible brand, I’m curious as to how Dairy Queen can compete in this fight for five bucks. 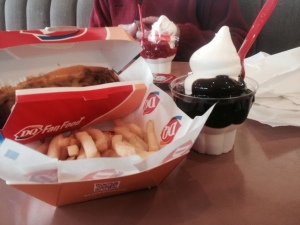 One of the wonderfully strange things about Ellensburg is that there are two Dairy Queens. One of everything else, two Dairy Queens. This place is as cold as Narnia and now twice as magical. If anyone is wondering where their local Dairy Queen is, Ellensburg probably took it. One DQ is located next to the university. My mom tells me this one is nasty. The $5 meal she ate there came with a cold hamburger with mealy meat, a small soda and fries, and no ice cream. This does not get me jazzed. Fortunately, there is another, and I venture to the Dairy Queen on the far side of town, near the freeway.

This Dairy Queen even looks more promising. The one near campus is built like a 1950’s burger stand, small and cramped. The freeway DQ looks like a normal restaurant, bigger than the average Taco Bell, but smaller than a Denny’s. Inside, the resemblance between the three employees gives me the impression I am in the comfort of a family-owned operation. The $5 lunch menu offers only four choices. There is a 3-piece chicken tender meal (I don’t know how three became the average serving size of chicken tenders, but most places adhere to this rule), a chicken wrap (for the delusional person who wants to feel like they’re eating healthy), a bacon cheeseburger, and a chili cheese dog. I was pretty impressed with the bacon and the chili-cheese. I could be wrong, but this might be the only time I encounter a $5 lunch that includes bacon or chili-cheese. Each meal comes with a basket of fries, a medium drink, and, and this is fucking huge, a sundae. I had prepared myself to be disappointed that I would go to a Dairy Queen and not get ice cream, but whatever corner-cutting is going down at the campus DQ, that dog don’t hunt here. The five dollar meal includes a sundae, and if you don’t want it right away, you can get a coupon to get a FREE sundae for later! And if you’re made of money, you can pay $1 more to upgrade your sundae to a Blizzard! I actually have the girl behind the counter explain this to me twice because I’m so excited, I can’t believe it. Yesterday I was stoked to get a cookie with my KFC, but today I get ice cream for lunch!

For $5.40, I get the “all beef” chili-cheese dog with a chocolate sundae and a Wild Cherry Pepsi. Not having Dr. Pepper would usually result in a points deduction, but the sundae bonanza makes up for it. As I wait, I check out the rest of the DQ menu to see what’s going on, and this stuff is expensive. We’re talking diner-type prices, or at least Carl’s Jr. Most of their combos cost over six dollars, and one or two were around ten bucks. They do have a crispy chicken sandwich and a chili-cheese dog combo for $5.29 and $5.69 respectively, but they don’t come with ice cream.  Breaking down the $5 menu, it seems like DQ is giving you a huge discount. There’s a promo deal for (guess how many) chicken tenders, fries, a drink, I think toast or maybe grilled cheese for $6.39, and though that seems fair, it won’t be around forever. Then there’s the chicken wrap by itself for $2.49, a bacon cheeseburger (larger than the one in the $5 lunch) is $5.19, and then a chili cheese dog goes for $3.29. Each one is half or more the cost of the $5 lunch. Add up the small fry ($1.69), a medium drink ($1.79), and finally the small sundae ($2.39),  and DQ’s $5 meal has value. But that really depends on the taste.

I open the carton of my chili dog, and the bun collapses under the weight of the chili and melted cheese. I gotta say that the chili is not as tasty as Weinerschnitzel’s, but it’s still pretty damn good. I can definitely taste the real beef of the hot dog, which is better than Weinerschnitzel’s. The fries come in a basket, and though the cashier tells me there are not as many as a normal basket, it’s still pretty sizable. In spite of the cold, I eat the sundae first and it is magnificent and smothered in warm chocolate. When it’s gone, I’m kind of bummed at how easy it is to find a Dairy Queen in Ellensburg and how rare it is back home.

Presentation: 2/3 – Everything came in its own container. Not environmentally friendly, but aesthetically neat.

Satisfaction: 3/3 – Hot dogs and ice cream are close to perfect foods, and getting them together for $5 is dope.

Value: 3/3 – DQ has some above average fast food prices, and their $5 menu makes it more accessible.

T + 3 hours: 1/3 – Though this meal stuck with me for longer, the eventual exodus was painful. Dairy plus chili plus lots of ketchup and salty fries do not make for a peaceful tummy.

What does five dollars mean to a Burger King?