With Star Wars: The Force Awakens on the horizon, it seems only appropriate that Disney and Lucasfilm create their very own holiday. How to celebrate? Empty your wallets.

As Mel Brooks is wont to remind us, it’s all about the merchandising. For the nerd in all of us, regardless of age or generation, no single property has generated more games, toys, and random bullshit than Star Wars. And of course, there’s an incredible amount of new crap to buy. In honor of Force Friday (as if we needed any more prompting to spend money in the name of The Force) all manner of new swag has obligingly awakened.

Assuming money were no object, we, Idlers, have compiled a list of our top-five must-haves from a galaxy far, far away. Shop wise, you must. 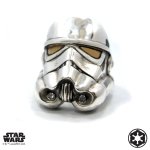 Han Cholo
hancholo.com
Stormtrooper Ring
SS: I’d buy this if I wasn’t still planning on having sex in the future.

From the website: “Born and raised in Los Angeles, California, ‘Han Cholo’ designer Brandon Schoolhouse grew up immersed in the sub culture of Hollywood’s music and art scene… the line has become the “it” accessory among Hollywood fashionistas and celebrities alike.”

Sphero
sphero.com
BB-8 App-Enabled Droid
LDG: The BB-8 droid toy is simply…adorable. It may not fly or glow like some of their other products, but set it to patrol mode and it’s sure to scare the hell out of my cat. Plus, if you have loads of time on your hands you can control it via the BB-8 app — run it into a wall and watch its head fall off.

Check out the YouTube video for a better introduction to your next favorite toy. 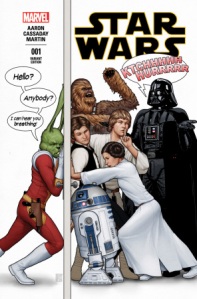 Marvel Comics
marvel.com
Star Wars and Darth Vader
MMDG: Marvel went absolutely bonkers with the “welcome home” blitz that brought the Star Wars franchise back to its original comic book publisher. The first issue of the “Skywalker Strikes Back” storyline was available in almost 100 different variant covers. My favorite might be the one featuring a return of Jaxxon, that ridiculous green bunny who goofed around with Han Solo in the 80’s funnybooks. Jar-Jar is still way worse though. Check out the most up-to-date list of all 95 variant covers for issue #1 here, and then head on over to eBay to complete the set.

Or save a thousand dollars and just pre-order the first trade paperback collections for Aaron and Cassaday’s Star Wars and Gillen and Larocca’s Darth Vader.

LEGO
amazon.com
Ultimate Collector’s Millennium Falcon
JSC: For the low price of only $5200 plus shipping I can live my Lego Dream and have four hours of Lego building fun. But seriously, if I drop $5200, why couldn’t the seller take care of the shipping.

It’s almost three feet long and uses close to 5200 pieces. So, yes, that’s more than a dollar per LEGO brick. Well, pony up fanboy. Are you an Ultimate Collector or not?! 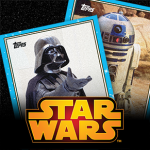 Topps Apps
topps.com
Star Wars Card Trader
MH: I only just downloaded it and I can already tell… Once I figure it out, I’m in deep, deep trouble.”

The guys who turned all your hard-earned cash into virtual sports cards in BUNT and HUDDLE are now doing the same with virtual Star Wars cards. Exclusives, varying degrees of rarity, a steady stream of new releases, and of course, Force Awakens cards.