Bridge of Spies is a historical drama directed by Steven Spielberg and written by Matt Charman and the Coen brothers. It tells the story of American insurance lawyer James B. Donovan, who finds himself defending Rudolf Abel, a captured Soviet spy, in the hopes that giving him a fair trial in court will limit the U.S.S.R. from using his imprisonment as propaganda. Donovan and his family withstand brutal scrutiny by the American people for defending a Communist, and while Abel is still found guilty of all charges brought against him, Donovan is able to convince the judges to grant imprisonment instead of the death penalty. This eventually turns Abel into a bargaining chip for the US government to negotiate release of Francis Gary Powers, an American U2 spy plane pilot being held in Soviet Russia. And who would be the man assigned to carry out such a task? James B. Donovan.

Bridge of Spies has been nominated not only for Best Picture but also Best Supporting Actor (Mark Rylance as Rudolf Abel) and Best Original Screenplay. As a history nerd, I really enjoyed this film. It’s a very well-written period piece that helps convey the widespread fear of Communism in America during the height of the Cold War. Scenes like the one where Hanks’ character Donovan returns home from work to find his son preparing for nuclear armageddon in the bathroom really drive this home. 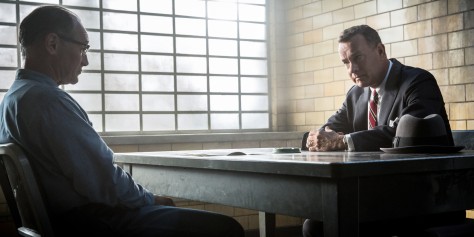 As much as I enjoyed the story and being transported back to the 50’s (the set designs and costumes were also fantastic), I felt this was a rather pedestrian effort from Spielberg. Teaming up with the Coens and cinematographer Janusz Kaminski (Schindler’s List, Saving Private Ryan) would lead me to believe I would be getting into something truly special, but there was never a “wow” factor for me. I didn’t see anything here that would lead me to believe this film was worthy of a Best Picture nomination. Mark Rylance’s nomination for Best Supporting Actor is certainly deserving and the screenplay by Charman and the Coens was fine, but overall the film lacked staying power. I don’t see myself looking back on 2015 and immediately thinking of Bridge of Spies as one of the best films of the year. It tells a good story and does it well, but one of things that made films like Mad Max and The Revenant so alluring was the obvious risks that were taken in creating those films.

I would absolutely recommend anyone watch Bridge of Spies. It highlights an important time in our country’s history that all Americans should know about. As a film though, I don’t agree with its Best Picture nomination.