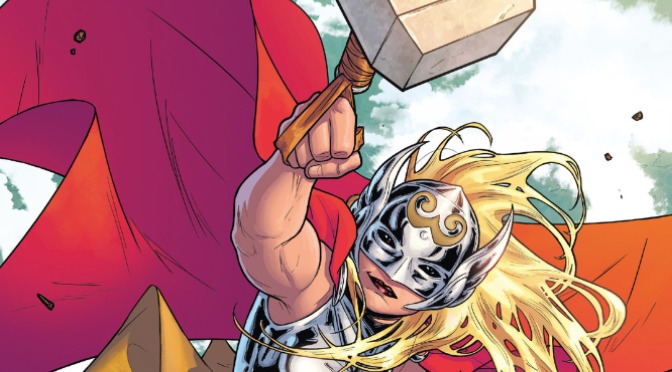 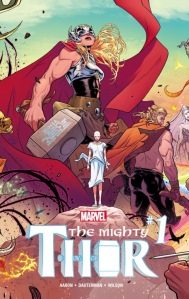 Much like Dan Slott and Mike Allred’s Silver Surfer, this new volume of The Mighty Thor, relaunched for All New All Different Marvel, gets the if-it-ain’t-broke treatment. Aaron and Dauterman’s “Lady Thor” was one of Marvel’s most entertaining titles of 2015, and it’s my personal pick for best among the new series in the current relaunch.

Thankfully, we’ve moved past all the Who Is Thor? nonsense. (Remember that long, drawn-out Who Is Red Hulk garbage? NOBODY cared and the climactic reveal was a yawner even for Hulkophiles.) Jane Foster is Thor, and she’s incredible. We don’t know what’s going on with O.G. Odinson (but that’s coming); we don’t know how Jane’s going to handle the cancer that’s eating away at her mortal body; and we still don’t know how well she’ll wield The Hammer. But those are the kinds of questions that a great series can address.

And in a rousing trial by fire, we’re going to find out exactly how worthy she is of Mjolnir. Within the first few pages, a meteorite shower of dead elves announces a sensational opening arc, and one of the best jams on mythology-infused superheroics since the Walt Simonson Thor stuff I devoured as a kid. 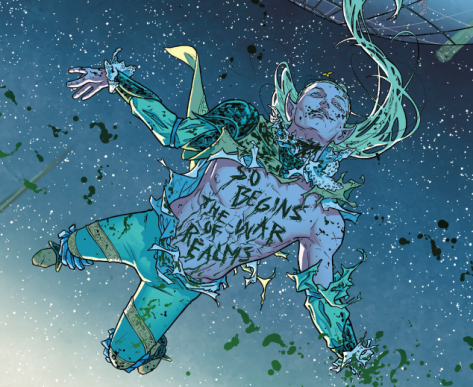 In 1962, Stan Lee and Jack Kirby first translated Thor, the Nordic God of Thunder, to the four-color pages of Journey into Mystery, and into our modern pantheon of superheroes. As a lesson in humility, Allfather Odin linked his son’s persona to the frail Dr. Donald Blake, whose crutch transformed into Thor’s hammer when called upon. Jane Foster’s “crutch” is considerably more severe than Doc Blake’s ever was, but the nod to Thor’s comic book origins — not to mention the eternal human narrative of a hero overcoming his or her limitations — is a nice touch. The idea of balancing humanity with divinity has always been at the heart of this character, keeping the original Asgardian grounded among the souls of Midgard whom he would come to protect. Jane’s cancer, and the fact that her Thor transformation cleanses and negates any chemotherapy progress, ups the ante quite a bit, but it’s handled masterfully by Aaron.

Aaron’s stuff is always good, and his other current work for Marvel, Doctor Strange and Star Wars, are must-reads. It’s the art of Russell Dauterman, however, that elevates The Mighty Thor to the top of the heap. Dauterman has a polish that belies his scant few years in the comics business. He combines the elegance of Jean Giraud with the intricacy of Geof Darrow, and flashes the layout panache of Will Eisner. 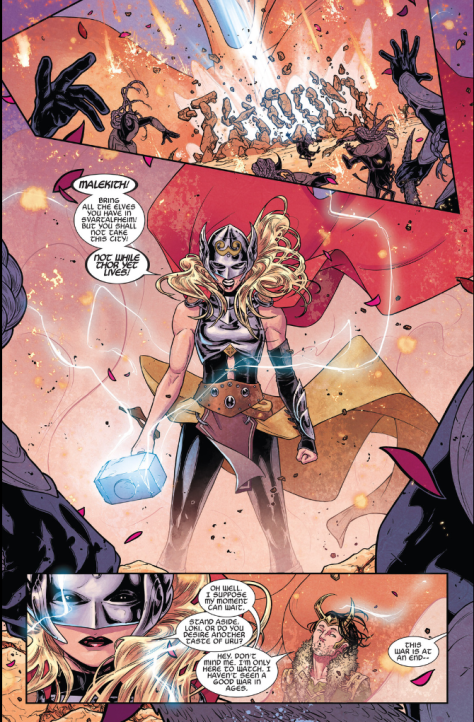 This series has made me realize that, Odinson be damned, I love the idea of Thor – the mythology, the swordplay, sorcery, and savagery. I know we’ll see that burly blonde again soon; the greater Marvel media machine demands it. And, when that happens (not spoiling anything for anyone who hasn’t read the current issue), I’m sure it’ll be another great storyline. But, if I’m being perfectly honest here, I like this Thor better. Keep fighting, Jane.

First collection: The Mighty Thor, Vol. 1: Thunder in her Veins (May)