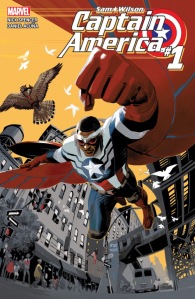 I love seeing a superhero handle problems that don’t involve the imminent destruction of the planet/universe. In a time where is seems like the norm is turn every superhero into a god, it’s refreshing to see a series go “small.” Add in a big middle finger to the establishment, and I’m. – SS

I was a little skeptical going in, but the political background totally drew me in. I love how the wonder of the super hero world is being weighed down by bureaucracy. Marvel has steered towards social commentary ever since Civil War, and I suppose Captain America is the bearer of those fruits. When those kids recognize Sam Wilson on the plane, they don’t make one wisecrack about him being the Falcon, but immediately recognize him as Captain America. It feels like this is Marvel’s first Black president. It’s interesting that some of the most persistent problems in this book will be navigating the figurative and literal American landscape. Also that joke about the minivan was great. “Pernicious stereotype…” – RF

Acuña is a beast. Cannot get enough his art and I actually dig the vibe of this story. The supporting cast is great and I like the idea of a small scale Cap trying to help the people. Would definitely read more – BC

Any comic with Misty Knight on the roster gets a guaranteed read from me. – IP

I liked this more than I thought I would. “Captain Socialism” not what I expected, especially coming in cold on the whole Falcon/Cap thing. And I dig Acuña’s art. And Misty Knight. Also, I know it’s coincidental, since that Loeb/Sale mini series is finally being released more than seven years after it was announced… but in light of the new black Cap, Marvel should really have re-considered titling that concurrently released series “Captain America White.” – MMDG

I really dug this, as my only connection to Captain American had been through the movies. It was great to have Sam Wilson take on the role and offer a fresh perspective, as I’ve been starting to get the sense that a lot of these characters are getting a little too close to the film versions. – MH

I like the all-Black cast, and the refeshing take on Cap. Nick Spencer did awesome work on Superior Foes of Spider-Man and his first-person narrative lends itself quite well to Sam Wilson. You can tell Nick is putting a little of his own beliefs into this comic and it’s all the better for it. This one’s got my attention. – 3D