Despite what their recent reboot event is called, Marvel comics actually did something all new and all different back in 2014 when it released the new Ms. Marvel. Carol Danvers, the black unitard-clad, blonde heroine, who had been Ms. Marvel for several years, had been promoted to Captain Marvel, creating the opportunity to have a new character fill the eponymous title. Instead of using any previous character from the Marvel pantheon, Marvel had a lightning-in-a-bottle moment, and handed over the property to a unique creative team. With the help of editors Sana Amanat and Stephen Wacker, writer G. Willow Wilson, and artists Adrian Alphona and Ian Herring, Kamala Khan, a young Pakistani-American woman, became the new Ms. Marvel, and the first Muslim woman to headline her own Marvel title.

Kamala’s backstory is an ironic take on the classic tragic origin: after disobeying her strict Pakistani-Muslim parents and sneaking out to a party where there would be boys and booze, Kamala Khan is unwillingly doused in Terrigen mist, which basically turns her into a super-powered Inhuman. In Kamala’s case, with irresponsibility comes great power. Unlike the cosmically powered Carol Danvers, Kamala is a polymorph, with the ability to stretch, bend, and change in size. She initially emerges from the mist with the ability to mimic forms, and morphs herself into the blonde, curvaceous Carol Danvers. In her disguise, but guided by her Islamic upbringing (“If you save one life, it is as if you’ve saved mankind entirely”), she rescues a classmate from drowning with her polymorph powers. However, after sustaining an injury, Kamala loses the ability to imitate other people. This loss is a defining moment for her character. It’s a statement that the need to blend in is not necessary. It underscores that Kamala Khan is her own Ms. Marvel with her own voice, and will be taking on various challenges differently than those before her.

It’s that different voice that propelled Ms. Marvel through the Secret Wars crisis, and made her an immediate icon. Ms. Marvel’s creative team, guided by Amanat and Wilson, has always posed social and philosophical questions to Kamala intertwined with a superhero plot. Ms Marvel’s challenges with super-powered villainy mirrors personal challenges that Kamala is having as a millennial woman, as a Pakistani-American, as a Muslim, a daughter, a sister, and a friend. But to get the feelings out of that complex texture, there is a lot of time spent watching Kamala interact with her family, her friends, and the world around her, that makes how she deals with problems, by “embiggening” herself to smash them, or shrinking to avoid them, really interesting. With all of the labels that could be put on Kamala, and all the influences converging on her, the polymorphic powers complement her need to adapt. This kind of detailed character development and story structure continues in the latest Ms. Marvel arc.

In the All New, All Different Marvel, the minds behind the initial Ms. Marvel series reunite along with artist Takeshi Miyazawa, to continue the strong legacy-building that began in the previous nineteen issues. A lot has happened to Kamala Khan in Secret Wars, and her new story begins with her growing into her status as an Avenger. This isn’t some wacky, “Deadpool’s a member” Avengers, this is the flagship team, the A-Listers like Iron Man, Captain America, and Thor. Ms. Marvel is aware of how important it is to see herself, sixteen-year-old Kamala Khan, standing next to Earth’s mightiest heroes.

In fact, the current problem Kamala faces is people using her image to promote a dubious cause. In real life, Kamala’s image has recently been used in the presidential debate, but somehow I don’t think Kamala, or the creators, mind seeing Ms. Marvel punch Donald Trump. In the comic, however, Kamala’s image is being used by Hydra, under the guise of urban redevelopers, to help gentrify her hometown of Jersey City.

Kamala means to Jersey City what Spider-Man means to NYC. Even her location reinforces her position as an emissary, a symbolic voice situated twelve miles from New York City; an Avenger, but not from Manhattan. She is of that world, but her roots keep her partially separated from it, emphasizing that she is a new type of hero for a new age. So when her progressive symbolism is highjacked to spread a terrorist agenda, the repercussions are serious. 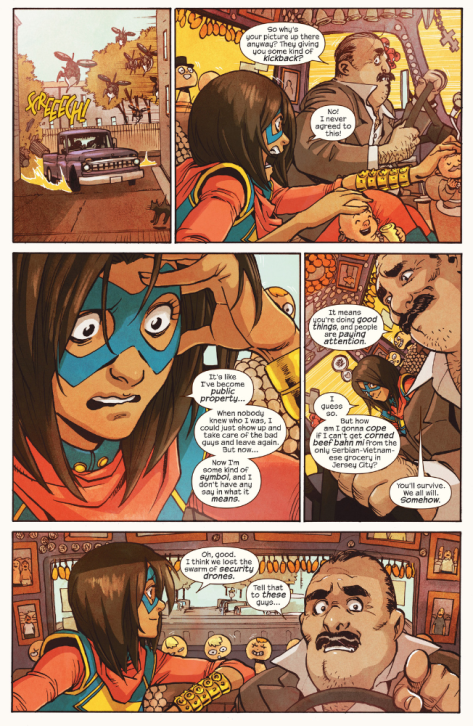 While Ms. Marvel has to deal with the physical threat of Hydra, Kamala deals with the backlash against Ms. Marvel “promoting” the bland redevelopment of her hometown. Her mother (aware of her identity) is disappointed and concerned; her best friend, Nakia, is protesting against Ms. Marvel; and somehow through it all, Kamala’s childhood sweetheart is dating some hipster girl named Mike. While dealing with unrequited love may seem comparatively trivial to terrorism, Kamala actually has to get over her feelings towards Mike in order to stop Hydra’s scheme. It’s gratifying as a reader to see the common thread that ties together all of Kamala’s challenges – at home or when she’s out saving the world – so that when she resolves one problem in her life, that lesson can be applied unilaterally.  Few super hero books are written so tightly, and this quickly establish Ms. Marvel as a serious force. It’s no wonder that the bad guys want to use Ms. Marvel’s popularity. The things that make Ms. Marvel special and different are targeted by large, malevolent entities that don’t appreciate the power of Ms. Marvel beyond her branding, a way to move products.

This idea is pretty interesting when you think about how Marvel is a division of Disney. Disney being a company whose brand was a huge part of 20th Century American Imperialism, with a history of being not so fair when it comes to diversity. The thought is that Disney, as a company, as a brand, stands for certain American values, values that could be interpreted as conservative, maybe even “traditional,” and the fact that media produced by Disney, which is consumed globally, promote that same agenda around the world is problematic. While it may not be an entirely bad thing, there is concern over abusing the free market system and basically indoctrinating the world with Disney-American values. In simple terms, Disney somewhat gentrifies the world. It’s a highly structured, highly profitable company and many other countries don’t have the resources or infrastructure to outproduce them in the industry. With how much media America puts out as a whole, there is less opportunity for emerging countries to share their point of view through their media, or build up their own production industry, which could help sustain a sense of cultural individuality. Now, it sounds a little crazy to put all of this meaning onto cartoon characters, but we do it all the time. Half of what I’m writing about here, and most of what I’ve researched, has been about the significance of Ms. Marvel in our culture. The Ms. Marvel story consciously addresses the power of symbols from a precocious, millennial perspective, and though it may not provide all the answers, the fact that it brings up this conversation is noteworthy.

It is complicated being a symbol of progress and hope. There’s pressure on Ms. Marvel to be inspiring, and it’s hard to do that when it’s unwillingly tied to a company that supports progress, but behind closed doors practices policies that do the opposite. The whole idea of comic book super heroes is centered around wish fulfillment. It’s about seeing ourselves as special as we think we are, with the potential to meaningfully affect the world. All people should know they could be the hero. On a basic level, what the Avengers stand for, — protecting the defenseless, justice for the innocent and guilty — subjectively sound good, but the heralds of the messages and the specific actions behind those ideas are just as important. But those effects are more subversive. I think Disney-Marvel is picking up on this, and that’s why we’re seeing an increase in productions featuring diverse characters, like Jessica Jones, Agents of S.H.I.E.L.D., and the upcoming Black Panther movie. Maybe Ms. Marvel will be out sooner than I think.

However, it is important to see Disney’s acquisition of Marvel not as a means to promote idealism, but as a way to make money. Disney CEO Bob Iger has basically admitted that Disney was attracted to Marvel as a means to sell more to the male demographic, which was underperforming compared to its feminine “Disney Princess” catalogue. By acquiring Marvel, Disney could slap pictures of Cap and Iron Man on lunch boxes, shirts, pencils (do kids even use those anymore?), paper plates, silly foam, etc. And they’re making bank, which I think is what’s most important to Iger. However, the growing diversity in the Marvel Movie Universe could signify a conscious effort by Disney to more accurately portray American diversity on the screen. Though that is a positive thing, it doesn’t necessarily preclude Disney’s dominance as a global, cultural force. But to help keep things light, I think there should be some satisfaction found in promoting fairer representation. It’s a catch-22 and not even Ms. Marvel, with all her embiggening and stretching, can wrap herself around it entirely.

I hope I’m not spoiling anything when I say Kamala defeats Hydra and saves Jersey City from gentrification (I feel like that should be obvious. It’s a happy book, I swear.) The issues surrounding her symbolic power have a less definitive resolution. Now that her image has been associated with Hydra, Ms. Marvel has lost the trust of the people. The closing panels show the city divided on whether or not Ms. Marvel is a hero or a menace. The story closes on Kamala, supported by her friends, accepting that she can’t control everyone’s perceptions, but she’ll keep doing her best. It’s an amazingly mature and honest way to end the story.

Though I’m sure the issue of Disney-Marvel and cultural imperialism will be talked about again, I choose to take a “glass half full” approach on this particular conversation. The All New All Different titles have made a visible effort in their staffing practices, as well as their titular characters. Sam Wilson is Captain America. Carol Danvers is Captain Marvel. There are several Spider-Men and Women. And, of course, there’s Kamala Khan, the new Ms. Marvel, the very first female, Islamic, Pakistani-American teenager with her own Marvel book, who also happens to be a friggin’ Avenger! Ms. Marvel may not be able to fight the social side effects of a global organization, but her presence as someone who consciously represents a variety of cultures, which are meaningfully demonstrated by her character’s actions, is a boon to the world of comics.

If you have access to them, starting Ms. Marvel from the beginning and keeping up with it is absolutely worth it. This book evokes all the tropes and imagery that makes Marvel entertaining, while developing a voice that speaks to an authentic-feeling, individual experience. The art in the book, either by Alphonsa or Miyazawa, makes Jersey City look like a whimsical place, a metropolis through the looking glass, filled with mysterious fog, mischievous robots, and a mutant cockatiel. They’re beautiful illustrations that enhance the magic in Kamala’s corner of the immense Marvel universe. Though I think there is a lot of dense social commentary in the book, Ms. Marvel is filled with fun action sequences, humor, and tenderness, and is one of those books that makes me excited to read comics.