The world still needs heroes! But… does it need so many of them? In the first issue of the new volume of Champions, writer Jim Zub and artist Steven Cummings double down on the expanded roster of teenage superheroes, immediately showcasing the breadth of characters in Marvel’s junior varsity ranks. The book opens with team leader Ms. Marvel coordinating the efforts of three different squads, each working to tackle a different crisis in a different part of the world. In addition to members of the original lineup, as envisioned by Mark Waid and Humberto Ramos when the second volume of Champions debuted in 2016 (minus Kid Cyclops), Kamala’s charges include other next-gen heroes introduced to the team in recent months, like Ironheart and the new Wasp, as well as brand-new or nigh forgotten kid crime-fighters like Pinpoint and Bombshell.

That’s a lot of heroes.

I’m not complaining, although I can understand how an already marginally recognizable team might suffer further complication by including ever more unrecognizable faces. In fact, I’m glad Champions exists. The success of the X-Men in the 80’s and 90’s birthed a glut of mutants and as many team books as a spinner rack could hold. In the 00’s and 10’s the same was true for the Avengers brand; those guys even needed their own planet to base operations. But Champions, both in the fictional world and in the retail environment, exists because the world needs heroes. And good superhero teams. Sure, there might be a little bit of cashing in happening in the immediate future thanks to the presence of Miles Morales, but Marvel hadn’t been banking on Sony’s fantastic Into the Spider-Verse achievement when they first put this book out. This book was engendered because some very talented creators gave life to some very compelling characters, and a few other very talented creators decided they could pull these kids together for some very compelling stories. And that’s exactly what they’ve been doing for almost thirty issues now. 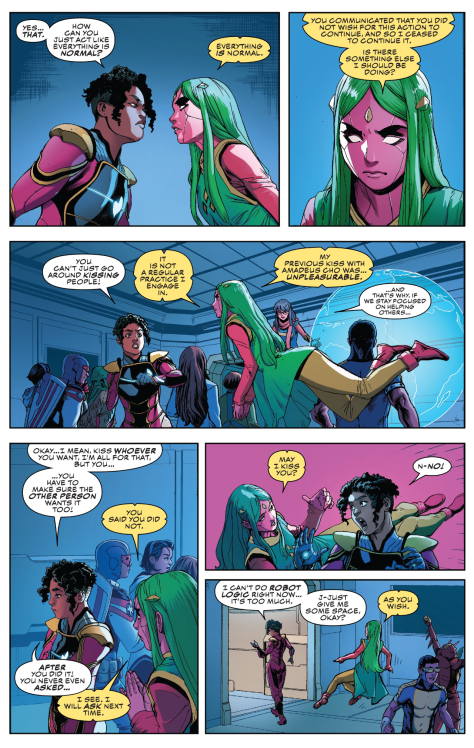 END_OF_DOCUMENT_TOKEN_TO_BE_REPLACED

Iron Fist #1 begins the way every Iron Fist story should, with Danny Rand recklessly throwing his fists in his search for something deeper. The book also uses first person narration in a similar way to the original incarnation of the series, which featured second person narration as a means of placing the reader in Danny Rand’s shoes. While “heroes without their powers” stories are not always spectacular, especially since they often lack the action of a traditional story, this book feels like the beginning of a promising journey for Danny. The colorful and gritty art also helps sell a martial arts world that, while somewhat dark, is also full of strange characters. Lastly, any Iron Fist book that uses the narration to accurately call each of Danny Rand’s expert techniques is fine by me. Iron Fist #1 Upward Cannon Punches and Tiger Tail Sweeps its way to success, even if it isn’t the most exciting book on the Marvel NOW roster. – IP

Better than the PM&IF book. Formulaic, but fun. I’m in for now. Brisson’s writing has potential, and Perkins’s grittiness gives this kung-fu epic the appropriate 70’s vibe. – MMDG

First off, Greg Smallwood’s layouts and Jordie Bellaire’s colors make this one trippy book. Delving into a character’s broken mind is something that comic books are very good at depicting. I already feel very into learning more about Marc’s fractured psyche and his quest to find out what is real and what isn’t. Lemire makes me want to read the next issue. – MeanOldPig

END_OF_DOCUMENT_TOKEN_TO_BE_REPLACED

Despite what their recent reboot event is called, Marvel comics actually did something all new and all different back in 2014 when it released the new Ms. Marvel. Carol Danvers, the black unitard-clad, blonde heroine, who had been Ms. Marvel for several years, had been promoted to Captain Marvel, creating the opportunity to have a new character fill the eponymous title. Instead of using any previous character from the Marvel pantheon, Marvel had a lightning-in-a-bottle moment, and handed over the property to a unique creative team. With the help of editors Sana Amanat and Stephen Wacker, writer G. Willow Wilson, and artists Adrian Alphona and Ian Herring, Kamala Khan, a young Pakistani-American woman, became the new Ms. Marvel, and the first Muslim woman to headline her own Marvel title.

Kamala’s backstory is an ironic take on the classic tragic origin: after disobeying her strict Pakistani-Muslim parents and sneaking out to a party where there would be boys and booze, Kamala Khan is unwillingly doused in Terrigen mist, which basically turns her into a super-powered Inhuman. In Kamala’s case, with irresponsibility comes great power. Unlike the cosmically powered Carol Danvers, Kamala is a polymorph, with the ability to stretch, bend, and change in size. She initially emerges from the mist with the ability to mimic forms, and morphs herself into the blonde, curvaceous Carol Danvers. In her disguise, but guided by her Islamic upbringing (“If you save one life, it is as if you’ve saved mankind entirely”), she rescues a classmate from drowning with her polymorph powers. However, after sustaining an injury, Kamala loses the ability to imitate other people. This loss is a defining moment for her character. It’s a statement that the need to blend in is not necessary. It underscores that Kamala Khan is her own Ms. Marvel with her own voice, and will be taking on various challenges differently than those before her.

It’s that different voice that propelled Ms. Marvel through the Secret Wars crisis, and made her an immediate icon. Ms. Marvel’s creative team, guided by Amanat and Wilson, has always posed social and philosophical questions to Kamala intertwined with a superhero plot. Ms Marvel’s challenges with super-powered villainy mirrors personal challenges that Kamala is having as a millennial woman, as a Pakistani-American, as a Muslim, a daughter, a sister, and a friend. But to get the feelings out of that complex texture, there is a lot of time spent watching Kamala interact with her family, her friends, and the world around her, that makes how she deals with problems, by “embiggening” herself to smash them, or shrinking to avoid them, really interesting. With all of the labels that could be put on Kamala, and all the influences converging on her, the polymorphic powers complement her need to adapt. This kind of detailed character development and story structure continues in the latest Ms. Marvel arc. END_OF_DOCUMENT_TOKEN_TO_BE_REPLACED