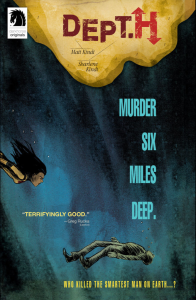 In his new series for Dark Horse Comics, MIND MGMT and Super Spy creator Matt Kindt teams up with wife Sharlene to pull the reader under for a fantastic, immersive murder mystery. Dept. H takes place in a deep-sea research station, thousands of miles below the sunlit surface (deptH, get it?) and within the first few pages, I’m already terrified.

I like to think that I have a healthy fear of the open water. I grew up a few miles from the Pacific, and now live even closer. I love the ocean, but it scares the hell out of me. And when special investigator Mia dons her superunderwatersuit and investigates the crime scene, one beautiful Kindtian clue at a time, the culminating image of the floating body absolutely chills me. 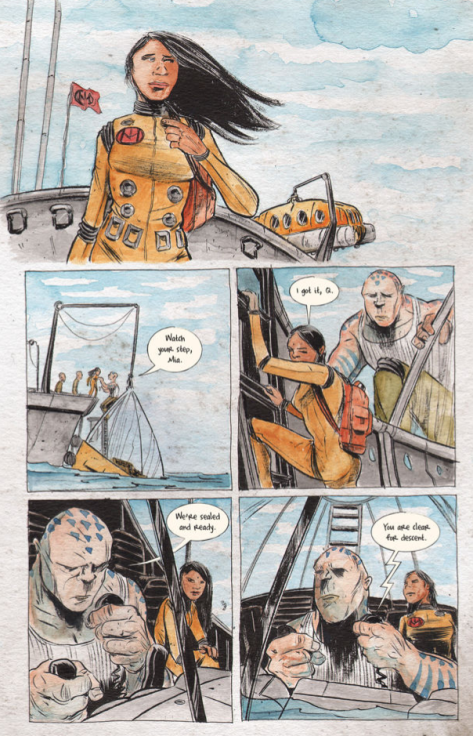 I’d like to echo the closing comments in Kindt’s afterword. I’m as guilty as the next guy of waiting until certain series have been collected before purchasing and reading. But let’s help keep those floppies on the comic book shelves, team. We’re in the era of binge-watched Netflix shows and discounted introductory TPBs. I get it. But I also get how valuable it can be to patiently wait for each new installment of an engrossing series, especially when the creators go out of their way to make each installment so individually worthwhile. And, in the case of Dept. H, we’ll be rewarded for swimming along with each successive issue, each day in the life of our main character. 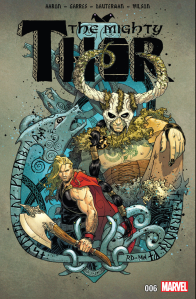 Marvel Highlights
We’re through 29 weeks of Marvel’s All New All Different Universe and, although we don’t have any premieres this week, three titles in our focus group’s Top 10 have new issues on the stands. First among them is The Mighty Thor #6, in which the villainous head of Roxxon, Dario Agger, initiates storytime with the devious Loki. Guest artist Rafa Garres paints a flashback tale of a young Thor and an impious Viking warlord. It’s a fun little interlude while we patiently await news of what’s going on with ol’ Odinson in the present.

In Captain America: Sam Wilson #8, the newly restored Steve Rogers joins former and current Captain Americas, Bucky Barnes and Sam Wilson, in chasing down the ringleaders of the Pleasant Hill revolt. And Karnak #3 welcomes new artist Roland Boschi to the party. Don’t worry: it’s as dark and gritty as ever.