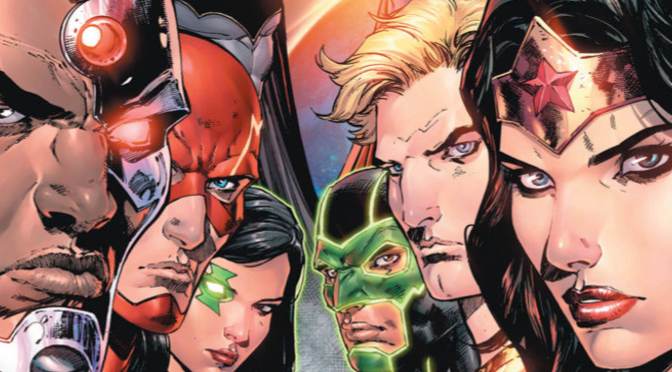 DC’s Justice League, the successor to comics’ first super-team, the DC/All-American Justice Society of America, has become something of an institution among comic book fans and pop culture junkies in general. For most of us who grew up with Super Friends every Saturday morning, this was the definitive assemblage of superhero icons, and in an era in which Hollywood has rabidly placed its hooks into every cape, cowl, and domino mask, trying like mad to control perceptions and dictate narrative directions, it’s more important than ever for these comic book institutions to stand on their own.

Bryan Hitch has the reins for this week’s Justice League: Rebirth, one of the “zero issues” that precedes the proper first-issue series reboot in DC’s Rebirth initiative. It’s a mostly familiar roster centered on the Batman/Superman/Wonder Woman trinity (albeit a pre-New 52 Superman who is still being regarded with some suspicion by his comrades). Aquaman and Flash are there, of course, as is Cyborg who, a few years ago, graduated from the Titans to the JLA. Taking the place of Hal Jordan are the two newest Green Lanterns of Earth, Simon Baz and Jessica Cruz.

This one-shot succeeds, possibly more than any of the Rebirth introductions to date, at offering an ideal starting point for new or returning readers. Obviously that has a great deal to do with the fact that these are all recognizable characters; even beyond our cultural familiarity with DC’s franchise heroes, however, Hitch does an excellent job of featuring the individual powersets, the organizational dynamic, as well as the new status quo with an unfamiliar Superman and new Lantern recruits.

That’s a lot to cram into 22 pages. Oh, and there’s a giant techno-organic space beasty invading the city (more Watchmen-crossover hints?) attempting to harvest the populace. And because that’s a lot to tackle, the comic stumbles a bit. Not to give away too many spoilers, but there is a climactic everybody-shoot-at-once scene inside the creature that would feel lazy even in a Saturday morning Super Friends episode. Not to mention that it isn’t at all clear where they are when the guns are blazing (or still trapped inside its tummy when it flees the atmosphere?) It’s a super-team book, and that’s a tough dynamic to iron out. When you’re tasked with tidying up a complete story that involves a major extinction-level threat in the confines of one issue, then you’re going to deal with some wrinkles.

All New All Different Marvel – Week 40
Somebody at Marvel needs to give this guy a monthly series. Matthew Rosenberg (Black Mask’s We Can Never Go Home and 4 Kids Walk into a Bank), who also did some mini-series work during the recent Secret Wars event, gets the nod for the obligatory “street-level” tie-in for Marvel’s current event. In Civil War II: Kingpin #1, Rosenberg teams up with artists Ricardo Lopez and Dalibor Talajic on a pair of stories that heralds Wilson Fisk’s return to New York and introduces him to the Ulysses problem.

What the hell are Captain Marvel and the Avengers doing hassling two-bit Manhattan crooks like Fancy Dan and Man Mountain Marko? Clearly, they’ve been getting their money’s worth out of that Inhuman with the prognosticating powers. So how is a Kingpin of Crime supposed to get stuff done? Enter Janus Jardeesh (cleverly named after the Roman god of time), a shitheel of a lackey who also happens to have a latent Inhuman gene. And after he stumbles through terrigenesis, Janus becomes Fisk’s new secret weapon.

Rosenberg’s knack for caper comics is on full display in this first issue, and, with any luck, that talent will turn itself into a regular gig in the seedy corner of the Marvel universe that already features the excellent Punisher, Daredevil, and Power Man & Iron Fist.