Bendis and Marquez’s Civil War II #3 provides plenty of shock value this week, and in the world of melodramatic superhero event books, where every reveal is built up via rickety scaffolds of significance, that’s saying something. So, yes, major spoilers ahead. This book is as recommended as they come, so if you haven’t already done so, check it out, and then report back here for some fallout analysis. We’ll hang tight. Skedaddle.

Fresh off the encounter with Ulysses, in which the Inhuman with the power of prognostication gives the assembled superhero community a palpable vision of The Hulk’s impending murderous rampage, the capes and tights gather outside Bruce Banner’s mountain laboratory for a much more stressful confrontation. Things go south from there.

Over the last decade, the death of a superhero has become a dangerously cliched plot device. The media at large makes note of it, adding to the artificial significance of the event, despite every comic book reader of any interest level knowing full well that it’s only a matter of time before the character is resurrected. Besides, you can’t kill superheroes. Particularly in this modern era of Hollywood blockbusters, animated television series, and mobile video games, when the concept of a canonical timeline has become blurred to the point of irrelevance, telling anyone that The Hulk is dead rings a little hollow. Hell, just today the fine folks at Marvel Puzzle Quest unveiled their five-star Hulk character, the Bruce Banner edition. The Hulk seems pretty okay to me.

So what is relevant? Why is this single issue so powerful? Like all good superhero epics, the weight is in the delivery and the treatment. How Bruce Banner is killed is as important as why he is killed, and if the developing storyline can make us question the meaning of heroism and the responsibility of power, then all the better.

I think this is an important distinction. In the 90’s it became popular to celebrate the anti-hero, the vigilante who skirted the border between good and evil, administering justice by any means necessary. From the obvious Punisher to certain characterizations of Batman, it was a dark and murky place for so-called superheroes. But in Civil War II, it’s impossible to argue that both Iron Man and Captain Marvel aren’t singularly noble, heroic figures. They are, however, separated by a fundamental difference in opinion regarding how that heroism is defined. 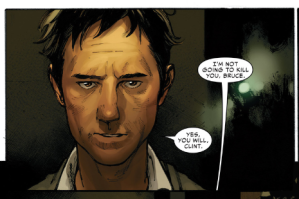 And to take this a step further, is Bruce Banner heroic for insisting that Clint Barton, AKA Hawkeye, kill him with a specially designed bullet should the scientist ever “Hulk-out” again? Again, one could argue both ways. Therein lies the powerful relevance of Civil War II and, indeed, Civil War before it.  The gray areas of justice that were uncomfortably murky when Frank Castle was gunning down drug dealers, is a full-on disorienting fog when you can’t decide who – if anyone – is right or wrong.

So The Hulk is dead. The 60’s comic book creation that probably best summed up the Cold War-era fear of science and atomic energy becomes the latest victim in a literal fight for control of the future. If we can’t fear the unknown, we destroy the unknown. Nicely done, Bendis.

Also, if you’re simply in the mood for a perfectly crafted comic book story, Bendis and Marquez are spot-on for twenty-four pages. The pacing is intense, the sequences are dynamic, and the overall package results in one of the single most powerful issues from Marvel this year. Now, what could this mean for the next phase of the Marvel U..?

We’re in Week 41 of the All-New All-Different Marvel Universe, which means it’s time to start taking a serious look ahead to the next “season.” As mentioned a few weeks ago, Marvel’s publishing initiative for this October is Marvel NOW! Unlike the Marvel NOW! that succeeded the Avengers vs. X-Men event, this iteration has a shattered “NOW” in the logo (so, way different), but it carries with it the usual promises of nothing going to be the same, ideal jumping-on point for new readers, yadda yadda…

Setting aside a few cynical reservations regarding the lazy branding, it’s impossible not to get excited. Especially when this week’s special Marvel Previews: Marvel NOW! posits so many interesting questions! It’s available for free from you local comic book shop, or download it for free from Marvel.com. Keep in mind, however, that this isn’t an official list of solicitations for October releases. Many of the books in here, much like last summer’s All New All Different Previews, will be released over the course of several months, starting in October.

Here are my Top 5 Takeaways from this week’s Marvel NOW! preview.

Is Tony Stark dead? There is already some serious speculation that The Hulk won’t be the last major hero to fall in Civil War II. Those teaser images released last week had lots of Iron Man imagery, but no Tony. In the Previews magazine, we see two new Iron Man books, Invincible Iron Man with Riri sporting some armor (and the digital ghost of Tony behind her), and in Infamous Iron Man, Victor Von Doom looks ready to prove that he really is fighting on the side of the angels.

No more mutants? For real this time? None of the current X-books are listed in this Previews. Now, again, this doesn’t mean we won’t have official solicits for Uncanny, or Extraordinary, or even the X-23 Wolverine book later this month, but it does seem awful suspicious that the only major mutant book in the magazine is the limited series Death of X, in which Jeff Lemire and Charles Soule finally get to the bottom of the Inhumans-Mutants conflict. We’re also going to find out, definitively, what exactly Cyclops did all those months ago, immediately after Secret Wars…!

Matthew Rosenberg gets his books. A week after suggesting that Rosenberg needs to get some ongoing series work with Marvel, I find out that he’s writing not one, but two new books. He’s taking over Rocket Raccoon (soon to be sans Groot), and he looks to continue his Kingpin scripting with a new solo series featuring everyone’s favorite portly crimelord.

Still no Fantastic Four sightings. My goodness, Jonathan Hickman, you well and truly broke Marvel’s First Family, didn’t you? While we patiently wait for Reed and Susan to make a return, it’s interesting that the other two members of the FF who had been featured in ANAD books aren’t anywhere to be found either. None of the Inhumans books give us a glimpse of The Human Torch, and the teaser for “The Epic Final Arc” of Guardians of the Galaxy seems to be missing a certain ever-lovin’ blue-eyed Thing.

Jason Aaron brings back the Odinson. Jane Foster in The Mighty Thor has been my favorite Marvel book over the last year, and I’m glad Aaron & Dauterman will keep the magic swinging into the NOW! era. But I’m also pretty stoked for Aaron and Coipel’s The Unworthy Thor. We’ve seen glimpses of the former Thor over the last few months, and now we’re gearing up for a whole lot more thunder & lightning.

DC Rebirth – Week 8
Finally, the Bat-book I’ve been waiting for. The Morrison run with Dick & Damian as Batman & Robin is one of my favorite books ever. They have one of the best relationships in comics so coming back to that made me happy. Dick has always been the brighter side to Bruce and seeing him come into his own and still stick to his ground is great. Nightwing is able to be the globetrotting adventure story all because of Dick. The book is fun and catches you up with where Dick is in his life, and by the time he becomes Nightwing at the end you want to cheer. The Paquette art is really expressive and he knows his way around an action sequence. This has been my favorite thing I’ve read so far of the relaunch. – BC