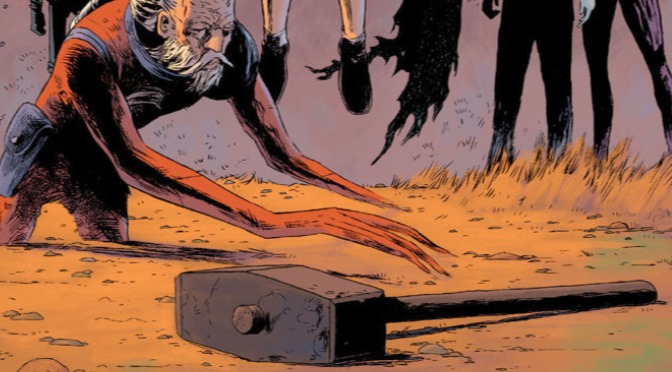 Jeff Lemire must be the hardest working person in comics right now. He captained four books in Marvel’s All-New All-Different relaunch; continues to publish the excellent Descender with Dustin Nguyen, has a full graphic novel scheduled for release early next year, and will be writing Marvel’s new Thanos series for this fall’s Marvel NOW! initiative. For starters. But his new Dark Horse series Black Hammer, debuting this week, may end up being my favorite Lemire book this year.

Together with artist Dean Ormston (Sandman, Lucifer), he tells the story of a Golden Age super-team now mysteriously trapped in an alternate reality and relegated to life on a small farm, just outside city limits of an equally small town. In fact, the main adversarial conflict in this first issue seems to be from the local sheriff, jealous of the attention his ex-wife is giving to “Abraham Slam.” The mystery deepens as we discover that, in the process of protecting Spiral City from an unnamed threat, the titular hero sacrificed himself to not only save the city, but his teammates as well.

There’s a special reverence in the creation of Lemire’s Golden Age-inspired heroes, the kind that we’ve seen from so many other writers and artists over the years, from veteran auteurs like Grant Morrison and Alan Moore, to more recent homages by folks like Jeff Parker and Paul Jenkins. All of the characters in Black Hammer are classic Golden Age archetypes, lovingly brought to life by this creative team, and imbued with that sense of wonder and space-age fantasy that first captivated society more than three-quarters of a century ago. Some of them, like Martian warlord Barbalien, are obvious nods to what must be some of Lemire’s favorite classic heroes (“Mark Markz..? Uh… it’s Swedish.”)

Like it or not, we live in an era of scrutiny and suspicion, where every opportunity to disgrace and denigrate is embraced with the speed of a Tweet or soundbite. Knocking people down a peg has become a full-time job for anonymous Internet trolls and publicly recognized spokespeople alike. Human heroes have always had flaws; but it seems like rather than celebrate the ability to overcome those flaws, we’d rather bury people in them. Not even our superheroes are safe. Shields are tarnished, capes are torn, and  they’re at war with one another.

So when you get to the last page of this first issue of Black Hammer, and you discover that an intrepid reporter (the Golden Age worship is nonstop!) from their home reality is still searching for those heroes, even ten years later… her words “no matter what, I’m going to find them” resonate with serious profundity. She’s looking for heroes, for all of us.

All-New All-Different Marvel, Week 42
Even though we’re nearing the end of the ANAD season, with Civil War II hastening towards an epic climax, and the next publishing initiative imminent, the fine folks at Marvel realized that we don’t have enough Deadpool in our lives. I’m starting to think that there really is a Wade Wilson out there somewhere collecting royalty checks every time his alter ego makes an appearance in a comic book, and an agent’s percentage anytime one of his mercenary employees gets a side gig. How else to explain the four new mercenary spinoff books in last week’s Marvel NOW! preview? Or, for that matter, how the Deadpool & The Mercs for Money mini-series from earlier this year was greenlit for a new ongoing, debuting this week.

This new series has something going for it, at least: we’re reintroduced to Negasonic Teenage Warhead and, in a shocking reversal on the Hollywood superhero takeover, she is the precog mutant that Grant Morrison originally created, and not the blow-shit-up version created for the Deadpool movie. Also, Masacre keeps me practicing my Spanish.

DC Rebirth – Week 9
Never liked the way DC concluded John Constantine’s  Vertigo life and New 52’d a younger version back into the superhero realm. It gives the character more exposure, for sure, but can a new Hellblazer book be as chilling as the old Delano stuff? Or as daring and arrogant as Ennis’s run?  As edgy as Azzarello? Probably not. Simon Oliver takes a first stab at fixing the problem by bringing him back to Londontown, but we still need to see Wonder Woman and Shazam for some reason. New readers will get the gist of the character: the con artist magician who can seemingly gamble carelessly with demons while still feeling the soul-crushing guilt of a youthful mistake. So it works as a zero issue. Where it goes from here, however, remains to be seen.