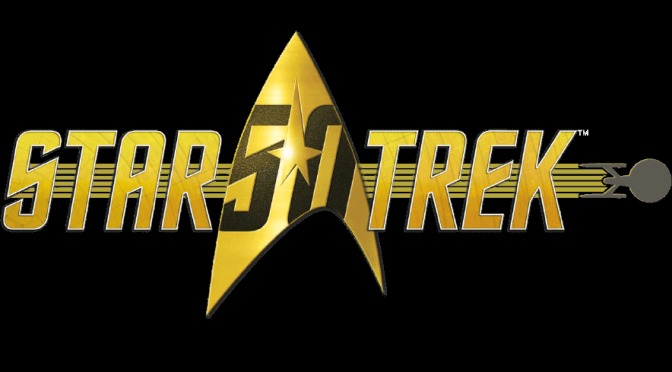 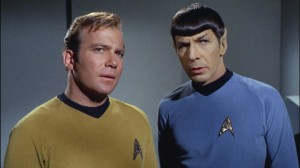 This month, one of the world’s most beloved science fiction franchises is celebrating its 50th anniversary. On September 8th, 1966, NBC aired “The Man Trap” and audiences were introduced to Captain Kirk, Dr. Leonard “Bones” McCoy, and the rest of the crew on a five-year mission aboard the U.S.S. Enterprise. Gene Roddenberry’s Star Trek was immediately popular, and, despite only three initial seasons, soon developed a cult following during the years of syndication, since evolving into a pillar of popular culture as well as the preeminent sci-fi saga of our era (sorry, Star Wars fans). In the five decades since Star Trek premiered, Roddenberry’s vision of our future has expanded into six television series (with a seventh forthcoming), thirteen feature films, and hundreds of novels, comic books, and games, as well as countless fan-driven celebrations ranging from conventions to stage plays and drag shows. There are plenty of ways to get in on the anniversary action. Here are five of the items on my to-do list.

Take in a movie.
J.J. Abrams and Justin Lin’s Star Trek: Beyond isn’t the only Trek movie in theaters this year (although it may be the only one worth springing for IMAX 3D). Adam Nimoy, son of Leonard Nimoy, started working with his father several years ago on a documentary that would explore the character for whom Leonard is universally recognized – the Enterprise’s first officer, Spock. When Leonard passed away last year, the film shifted focus slightly, and began to incorporate more biographical background on the man behind the pointy ears, including an incredible perspective on mid-century Hollywood. The resulting film, For the Love of Spock, is a touching tribute to Adam’s father, as well as a love letter from a planet of Trek fans to that most endearing of Roddenberry’s creations. 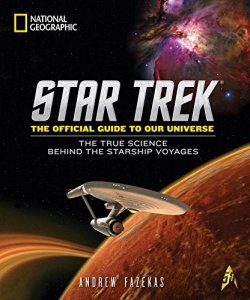 Gaze at the stars.
Professional stargazer Andrew Fazekas, AKA The Night Sky Guy, has recently published Star Trek: The Official Guide to Our Universe through National Geographic. I’ll admit to being one of the first guys to surrender to sci-fi fantasy; my disbelief has a hair-trigger suspension activation. But I love how attentive the show and film writers have been, over the decades, to the latest astronomical discoveries, quantum theories, and general scientific advances. Fazekas’s book is, truly, a guide to our universe, in so much that Star Trek has always been about our universe and our place within it. It’s a handbook for the amateur stellar cartographer in all of us, presenting real knowledge of celestial bodies through the lens of various Trek representations. It’s as impressive to see how much the show “got right” as it is entertaining to read about all the wild instances of sci-fi poetic license.

Play a game.
The board game of our time meets the adventure of our future. Mayfair Games released this Star Trek-themed version of Settlers of Catan in the states a few years ago, and now it’s the only version of Settlers that I want to play. Instead of collecting and trading lumber, wool, brick, wheat, and ore; players manage resources of dilithium, tritanium, food, oxygen, and water in order to build starships and explore strange new worlds across the galaxy. It also features a deck of support cards that feature characters from The Original Series. It really is just Catan with a Trek skin and a few show-related twists to spice things up. Basically it’s everything I wished from Starfarers of Catan, but with Kirk, Spock, Yeoman Rand, and the rest of the gang thrown in for good measure. The game had been readily available at major retailers up until a few months ago, but has recently sold out and is awaiting a new printing. I’ll wager you can still track one down at your neighborhood game store, or just come on over for game night.

Go to the ballgame.
The San Francisco Giants may not have been the first Major League Baseball team to host a Star Trek night (that distinction goes to that despicable team in Southern California that had the audacity to adopt science officer blue for cross-branded t-shirts in 2012), but as the home ballpark for Starfleet Headquarters, it stands to reason that AT&T would find a way to celebrate the anniversary. The Giants love theme nights, and San Franciscans need very little provocation to get into costume. Last Friday, in a key game against the Cardinals, attendees received sweet Enterprise bobbleships, players were announced on the jumbotron as Federation officers (but were also given nicknames for some reason… Brandon Crawford, AKA “The Golden Glove”), and I hunted in vain for any hybrid merchandise. It’s okay, Giants. You guys just focus on not fucking up the second half of the season any more than you already have. But next year I want to see more Sisko…

Watch TV.
Obviously the very best way to appreciate fifty years of this cultural phenomenon is to watch the show. Virtually every episode and most of the movies are available to stream on Netflix and Amazon Prime. Or you can recalibrate your tricorders for Star Trek: Discovery, by trying out CBS’s new streaming service. The newest Trek series will be beaming exclusively to CBS All Access in 2017. Need a place to start? Check out these Top 5 lists of our favorite episodes from The Original Series, The Next Generation, and Deep Space Nine.