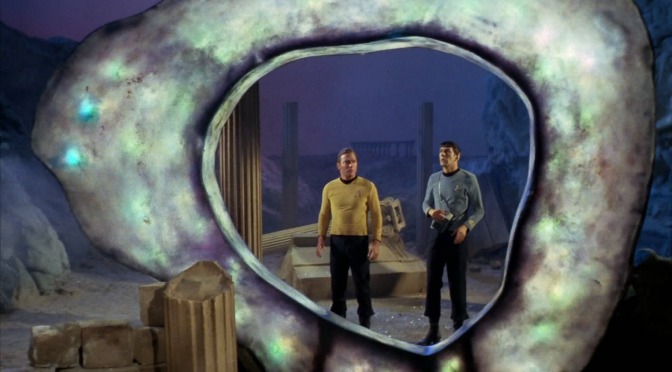 This early Trek episode provides examples of some of the classic conventions that we’re all familiar with: red shirts dying first, Kirk’s problem-solving fisticuffs, and discovering that space is full of beautiful women. It’s also a reminder that, as wonderful as this original cast is, sometimes the guest stars steal the show. Gene Roddenberry’s wife, Majel Barrett, is back as Nurse Chapel, a role she became more and more comfortable with as the seasons progressed (and the role I’d prefer to remember her for, as opposed to Lwaxanna Troi from Next Generation). The great Ted Cassidy (Lurch from Addams Family) plays the hulking Ruk. And the gorgeous Mini-Skirt Mobster Sherry Jackson, as the android Andrea, teaches us a thing or two about programming. In the middle of all this is a meditation on humanity’s quest for youthfulness, and the ever-pertinent question of Man or Computer.

Decades later, this remains one of the most prescient of the Star Trek stories: a race of beings has become anesthetized by their technological and biological advances, subsisting in a world of virtual reality while their real world deteriorates into ruin. This was the first episode I remember truly watching, start to finish. That was because one of my uncles, keen to the fact that I was interested in sci-fi, handed me a copy of this two-parter on a Betamax cassette before I was even old enough to operate the videotape rewinder. He also explained the creation of this episode, as well as the concept of series pilots.

The first, rejected, Star Trek pilot, entitled “The Cage,” featured Jeffrey Hunter as Captain Christopher Pike on the bridge of the Enterprise and Majel Barrett, in her first Trek role, as his first officer. The series wasn’t greenlit until a second pilot was produced, this time featuring the crew we all know and love (the one carry-over being Leonard Nimoy as Spock). But rather than scrapping that original pilot, “The Menagerie” deftly integrates that original story, and much of its production, into a plot wherein Spock finds himself on the brink of a court martial for disobeying the only Starfleet regulation for which the penalty… is death! I remember truly stressing out over this as a kid. What the hell is wrong with Spock? Why is Talos IV off limits? What are these strange feelings I’m experiencing when I see Vina, the dancing green-skinned Orion slave girl?!

This episode is on most lists of favorites, and for good reason. Written by Harlan Ellison, and featuring a young Joan Collins as Edith Keeler, “Forever” is a simple love story framed by the not-so-simple act of time travel and the dangers of altering the past. Like any good science fiction institution, Star Trek has had its share of time travel tales over the decades, on both the big and small screens. None of them, however, match the poignancy, humor, and elegance of this single episode. From the burgeoning friendship between Kirk and Spock, to the luminous grace of Edith Keeler, to the haunting mystery of the Guardian of Forever, it’s a perfectly dialed episode, the kind we rarely see anymore in the days of serialized dramas and made-to-binge series. And my favorite part might be when Kirk tells Keeler of a yet-to-be-born novelist who wrote that those three little words “I love you” are less vital to the spirit than “let me help.”

“Action” is admittedly silly, but I love the gangster episodes on Star Trek. Not just here, in the original series, but in all the Dixon Hill adventures from Next Generation, the Vic Fontaine holosuite programs from Deep Space Nine, and even Tom Paris’s speakeasy escapades on Voyager. There’s something so charming about our future selves getting carried away while romanticizing the Prohibition era. Here, a mimetic society on the fringes of the galaxy has become adversely affected by the acquisition of an Earth book on the history of Chicago’s gangs. Shatner’s signature staccato delivery is a thing of beauty when Kirk dons his pinstripes and fedora to put the bag on Krako and Bela.

Before Klingons got the prosthetic upgrades (or downgrades, if we’re talking dentition) on Next Generation, and before the Empire allied itself with the Federation, Earth’s alien nemeses were just really tan, really loud, and very bushy of brow. And they were just as distrusting of us as we were of them. I didn’t realize it as a kid, but this business with the Klingons was a recurring allegory for the Cold War conflict with the Soviets, and in “Dove,” an alien being was responsible for fomenting hostility between the crews of Kirk and Kang, feeding on the resulting violence. What I did realize at the time, fairly cognizant of the persistent tension and the nuclear arms race, was that things would be wonderfully more easy to understand if we could just blame evil deeds, hatred, and rampant propaganda on a lurking, sinister third party. What Gorbachev and Reagan really needed to do was share a drink and a laugh.