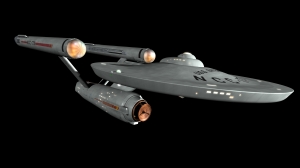 This early Trek episode provides examples of some of the classic conventions that we’re all familiar with: red shirts dying first, Kirk’s problem-solving fisticuffs, and discovering that space is full of beautiful women. It’s also a reminder that, as wonderful as this original cast is, sometimes the guest stars steal the show. Gene Roddenberry’s wife, Majel Barrett, is back as Nurse Chapel, a role she became more and more comfortable with as the seasons progressed (and the role I’d prefer to remember her for, as opposed to Lwaxanna Troi from Next Generation). The great Ted Cassidy (Lurch from Addams Family) plays the hulking Ruk. And the gorgeous Mini-Skirt Mobster Sherry Jackson, as the android Andrea, teaches us a thing or two about programming. In the middle of all this is a meditation on humanity’s quest for youthfulness, and the ever-pertinent question of Man or Computer. END_OF_DOCUMENT_TOKEN_TO_BE_REPLACED

Since our goal for 2012 is to kick-start Idle Time and keep this website jumping, it might be a good time to take a fond look back at our original website. No, not that one. That’s right, that one. The original Google Group. It’s still there and functioning, but since all Idling eyes should be here at WordPress, the old Group site is like one of those half-empty ghost malls. In its glory days (summer 2007 – early 2009), the Group page enlivened many a dull workday with debates, random thoughts, and the ever-popular Top 5 lists. As explained before, Top 5 lists were the little acorns that grew into the Institute of Idle Time. Anyone was invited to come up with a list topic, and encourage everyone to weigh in with their own entries. There is a lot of fun stuff buried in the old Group site that deserves to be re-discovered and re-read. Hence, this Encore Presentation.

In the spring of 2008, no one had yet seen Indiana Jones and the Kingdom of the Crystal Skull (and thus, no one had yet experienced the crippling disappointment of almost Phantom Menace proportions), but as a tip of the battered fedora to Shia LeBeouf‘s introduction to the series, Mike Di Gino posted the topic of Top 5 Sidekicks to the group. Some of the more iconic sidekicks had already been taken by the time I weighed in (repeating items from someone else’s list was allowed in extreme cases, but generally frowned upon), so here’s what I came up with:

Sidekick Type #5: The Sidekick Who Is Not As Cool As You
Milhouse Van Houten — The Simpsons

A walking, talking self-esteem boost for Bart, the rasping, bespectacled Milhouse would be the sidekick of choice for someone who associates with local psychopaths Dolph, Kearny, and Jimbo. Milhouse can be jettisoned at will, providing a decoy (if the bullies are victimizing Bart), or just because he’s too dorky to hang out (if the bullies are teaming up with Bart). But at the end of the day, Milhouse will always be there, usually stuffed conveniently in a locker.

END_OF_DOCUMENT_TOKEN_TO_BE_REPLACED

…and I feel fucking great! 2012 is shaping up to be one apocalyptically fantastic year for dorks to be alive – including myself.

Movies, Comics, Television, Internets, all have something huge descending on us in the following 12 months – like a 170 kilometer asteroid heading straight for the Yucatan peninsula unleashing a tsunami of radness!

You’ll notice there is one genre missing from my list above there…. music!!! 2012 looks to be one of the shittest years ever for music fans. Well, I mean music fans that have good taste. If you like: Insane Clown Posse, Brett Michaels, Linkin Park, Matchbox 20, No Doubt, The Offspring, and Wilson Phillips then hey, things are gonna be okay pal. BUT, for the rest of us 2012 is going to be a tough one to get through.

There are only a few releases I’m actually looking forward too: The Shins, The xx,  The Wrens, Damien Jurado, and maybe Spiritualized (if I’m in the right mood). Looks like it’s time to break out the back catalog of The Band again and head up Cripple Creek for a few months. END_OF_DOCUMENT_TOKEN_TO_BE_REPLACED