As part of our Ultimate Playbill project, each week a faculty member will take the time to extol the virtues of one of the beloved films on this list. This week, I tackle lebronald’s #2 pick, The Ring (2002, Verbinski)

This past summer, while JDG was home from school for a few weeks, I took advantage of a rare opportunity to have dinner with both of my kids. The conversation turned to the Ultimate Playbill project. LDG, through her five picks for the list, has demonstrated a clear love of the horror genre. She went on to explain that if her uncle had not drafted The Ring, she likely would have. “I love that movie. One of my first scary movie experiences.” At this point, JDG, who is already a man of few words, even more so when there’s pizza in front of him, put down his slice and glanced up at the rest of us.

“That movie ruined me.”

I don’t claim to be an expert in child rearing by any stretch, and I’m not sure if any of the parenting guidebooks already feature chapters on exposing your kids to nightmare-inducing imagery, but I will freely provide some real-world data for any future addendum. Ten years old is the right age to show your kid a scary movie; she’s likely to turn into a lifelong fan of the genre and insist that her future boyfriend wait until after dinner to watch The Descent. Eight years old? That’s just going to mess a kid up. JDG, to this day, takes a hard pass on a fright flick, especially if the sun’s down.

I hadn’t seen the movie yet either (pretty sure there is a chapter somewhere about appropriately previewing content before sharing it with an impressionable audience, but who has that kind of time?) but, like the rest of the world, was fully aware of the buzz surrounding The Ring when it came out around Halloween in 2002. I knew the name of the principal antagonist; Samara was the most popular “costume” that year, if the mere act of pushing long, wet hair in front of one’s face qualified as dressing up. I was aware of the premise: if you watch the cursed video tape, you’d soon hear those fateful words and be dead in a week’s time. In the glorious Last Days of Prank Calls, before cell phones and caller ID forced teenagers to the Internet in order to be anonymous dicks, hushed “Seven days…” voicemails were ubiquitous. And you couldn’t walk into a Blockbuster without catching at least one snippet of conversation that revolved around the undeniable fact that “Ringu was better.”

Whether or not you agree with that sentiment, or even realized that Verbinski’s movie was based on the 1998 Japanese version (which in turn was based on a 1991 novel), it was clear that Hollywood realized it had a goldmine on its hands, and was ready to cash in. Teenagers love to be scared, and by avoiding the R-rating of late-20th century movies like Scream and I Know What You Did Last Summer, The Ring established a precedent that packed theaters with shrieking high school students, every October, throughout the new century.

But more than just a tipping point for an industry-targeted demographic, The Ring deserves acknowledgment as the first significant horror movie of the 21st century. Indeed, it is the ghost story of the information age. That’s not to say that the movie doesn’t thrive on time-tested, even clichéd, horror movie conventions. You’ve got the ominous phone calls, of course. There’s the parent-teacher exchange, “I need you to have a look at something,” meaning the kid’s been splintering Crayolas while drawing some pretty disturbing little pictures. The movie has its share of extreme close-ups, shadowy edge-of-frame movements, and requisite jump scares. Hell, we even get a bonafide cabin in the woods. So what’s so different about this movie?

Sure, there’s nothing very “modern” about videotapes, not even in ’02. But the fact that this audio-visual medium is the conduit by which victims are literally scared to death is nonetheless intriguing. Our society has become ever more obsessed with technology; our eyes constantly compelled towards one screen or another, transfixed by flashing images and a litany of sounds. If I’m a modern ghost hell-bent on tormenting as many people as possible, I can’t think of a better way of operating than through your TV.

Incidentally, my mom always used to tell me not to sit so close to the television. Every poor sap in this movie has to get right up on the fucking TV when they watch that goddam tape. Listen to your mothers, kids. And chew with your mouth closed.

There’s a great shot midway through the movie, when Naomi Watts’s character, Rachel, gazes out the window of Noah’s downtown Seattle loft and surveys the apartment building across the street. All those televisions… all those people, absorbed and enthralled. Rachel is desperately searching for answers. Whether she believes the rumors or not, both she and her young son Aidan have seen the tape. Now, the clock is ticking, and they may only have days to live before meeting a grisly end. And there are all these other people – in Seattle, in the world – going about their lives similarly controlled by the content of their screens. How many days do they have left?

Adding to the aesthetic of a new age haunting is the look of The Ring itself. Much of the movie has a steely blue pallor – a cast of mechanical bleakness that seems more appropriate to modern science-fiction than traditional horror. 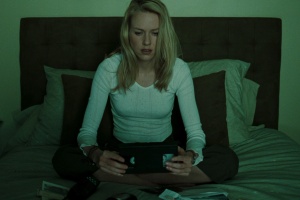 And what of that videotape itself? My first reaction, when it’s shown in its entirety, with its amateurish, seemingly incongruous, juxtaposition of unsettling imagery is, well… Noah actually takes the words right out of my mouth. “Very student film,” he says, completely nonplussed and altogether unconcerned. Gradually, however, as Rachel’s quest to find answers to Samara’s curse progresses, the mystery unravels from a relatively sophisticated plot fabric that involves suicidal horses, magnetic imaging, and the inimitable Brian Cox. And every little image from that tape comes into play.

In fact, one of the most terrifying parts of The Ring, personally, was realizing that these not-so-random elements – like the spinning ladder, the well, and wet everything – were showing up over the course of the narrative. We’re approaching the climax of the movie and we still hadn’t seen that disgusting nail through the fingertip. I might have been more concerned with when and how that terrifying bit of torture was going to insert itself than I was with what “the ring” actually was, or whether or not Rachel was going to solve the riddle in time.

Speaking of the climax, the heartpounding ending to The Ring might be where Gregor “Gore” Verbinski does his best work. This flick was early in his directing career, and he was quickly able to parlay its success into helming one summer blockbuster after another, beginning with ’03’s Pirates of the Caribbean. He may not be doing much in the horror vein anymore, but Gore has no problem building tension to a fever pitch. I love the marbles circling to the depression in the floor, the closeup of the nails emerging from the floorboards, the sun setting on the last few hours of Rachel’s deadline. And like any good thriller, even when you think you’re in the clear… you have to realize that nothing can be that simple.

The Ring‘s popularity in this country sparked not only a sequel, but an eyes-eastward movement from other studios to bring popular Asian thrillers like The Grudge and Oldboy to Hollywood. In Japan, however, the popularity of The Ring franchise is on another level. There have been close to a dozen different films based on Sadako (the Japanese name for the principal fiend) and her supernatural mythos, a television series, and, of course, manga. Are American audiences ready for more? Hollywood is banking on yes. Originally slated for this October, the third film in the American Ring series is now scheduled for an early 2017 release, with events taking place thirteen years after the first movie. As lousy as the first sequel was, I’m pretty sure I’ll be watching this… And more than likely with at least one of my kids.