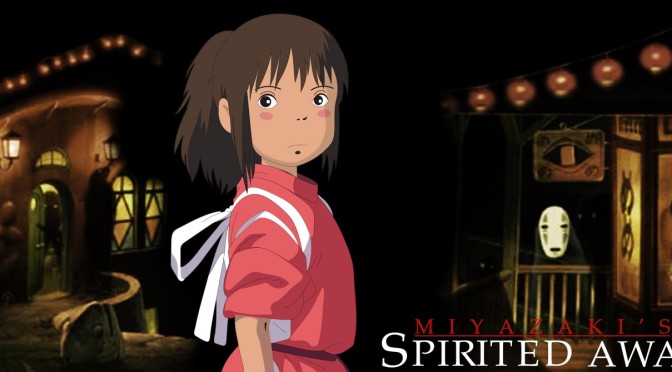 As part of our Ultimate Playbill project, each week a faculty member will take the time to extol the virtues of one of the beloved films on this list. This week, I tackle meanoldpig’s #5 pick, Spirited Away (2001, Miyazaki)

When we originally started this Playbill, I knew for a fact that Hayao Miyazaki would make the cut. However, the real question—which film? Growing up, MMDG did his due diligence by showing my brother and me several of Miyazaki’s films and, to be honest, I’m glad meanoldpig picked Spirited Away. Personally, it would have been hard for me settle on a favorite, but Spirited Away lies in my top three of his films and was an absolute treat to rewatch.

It has been about ten years since I last watched this film.  As a child I was intrigued by this young girl (a few years younger than I was at the time) and this crazy adventure she found herself wrapped up in. Dragons, witches, and spirits of all kinds brought such imagination to this film and it was enjoyable to get lost in this world. As I rewatched it this week I found I was not just drawn to that imagination, but also the love and selflessness that makes this film genuine.

The film opens up with a 10-year-old girl clutching flowers and complaining in the back seat of her parents’ car about their relocation to a new city and a new home. As she rereads the card accompanying her flowers she states, “I finally get a bouquet and it’s a goodbye present. That’s depressing.” Her father misses his turn to the house and decides to take a path through the forest. As they approach a tunnel, her parents decide to explore a bit. Chihiro, now painted as a grumpy and impatient child, yells for them to turn back. As her parents enter what looks like an abandoned amusement park they find a vacant restaurant filled with delicious food. Chihiro warns them to leave the food in fear of getting in trouble. Instead, they decide to stuff their faces and are turned into pigs. Losing her parents to gluttony, Chihiro’s true quest begins as she fights to turn her parents back from their pig form and escape this world she is sure is just a dream. As her journey continues, she meets new friends and her character transforms from one of a sullen child to a selfless, courageous young girl.

The change from day to night in the “abandoned” city is truly magical as the lanterns switch on and the city fills with all kinds of spirits. Something identified in this scene and that truly sets apart Miyazaki’s films is the immense attention to detail. This ranges from the character development of Chihiro to the detail that was put into each individual event that she encounters. In fact, this movie emerged because Miyazaki felt there were no movies around for 10-year-old girls at the time. He wanted a movie that highlighted a heroic young girl and used this inspiration in every action of Chihiro.

Although this film seems as if it stemmed from pure imagination, Miyazaki actually pulled from  his real life events. The stink spirit scene where she finds a bicycle sticking out of their filthy guest is actually based off of a river Miyazaki cleaned. “My local river. And there really was a bicycle. It was stuck in there. Ten of us wrapped a rope around the bars and slowly pulled it out. We really cleaned up the river, and the fish are back. And that’s why I added that scene.”

Overall this movie is creative and exciting. The colors and characters are original and enticing! As a young girl when I first watched this, I loved Chihiro’s journey and her kind acts towards others. However, I enjoyed it just as much as an adult and still felt the same affection towards the character that she becomes.

Fun fact: If you ever find yourself in Taiwan, you can visit the town that inspired the setting for Spirited Away!