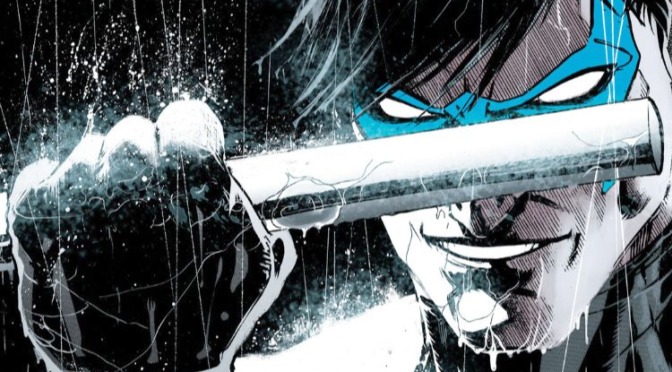 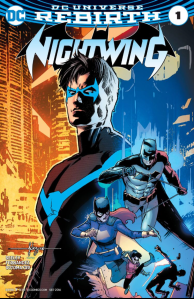 As a kid, Batman was always someone I enjoyed more on his own. I never really got the appeal of a Robin. I didn’t like the New Adventures of Batman and Robin as much I did the original animated series. It never really clicked for me until Grant Morrison had Dick Grayson (the original Robin) become Batman in order to fill the shoes of a supposedly dead Bruce Wayne.

From there, I learned that I really liked Dick (going to be said at least once) because he was everything that Bruce wasn’t. He was a circus kid, one who grew up loving the danger and being able to laugh in its face. He wants to believe the best of people. The tragedy that created Dick wasn’t one that would haunt him like Bruce; he would use it to inspire hope not fear.

This sense of hope and fun amidst the Bat-books is part of the reason why Nightwing by Tim Seeley, Javier Fernández, and Chris Sotomayor is so great. Writer Tim Seeley understands the character and was half of the writing team on Dick’s previous book Grayson. While that book was more of the 60’s spy book, this one is firmly rooted in Dick cementing his role in the Bat-family. It’s an examination of everything that makes Dick Grayson  so damn special. 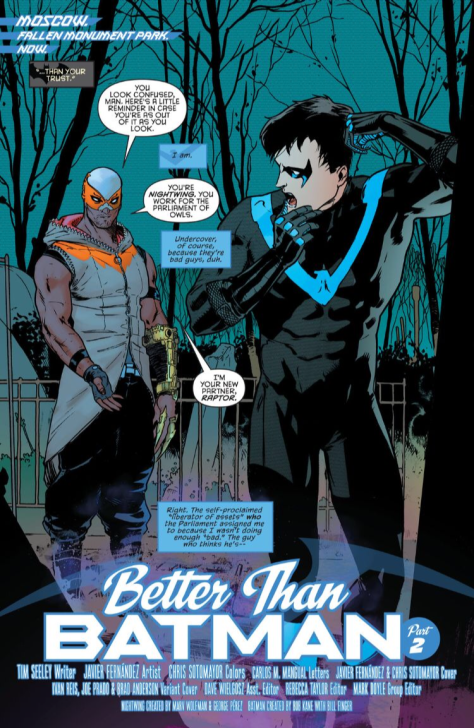 Nightwing actually is one of the only books I read for the Rebirth that truly felt like a new beginning; it also seemed to have the only necessary Rebirth prologue issue. In it, Seeley manages to nail down what makes Dick so unique. The name Nightwing doesn’t come from Batman; it comes from Superman. It’s the name of a Kryptonian hero whose name means, “The Great Rebuilder and Catalyst of Change. Eternally reborn to start anew.”

That catalyst of change is so apparent within the pages. He is the perfect hybrid of Batman, Superman, and all of the Titans he has worked with. Dick has the rare comic book privilege of being a hero we have actually seen age from boyhood to adulthood. We’ve been able to see all the changes and hardships he has gone through. He’s spent his entire life in different roles, but above all he is true to himself.

Seeley understands now how important it is that Dick gets to be Dick again. He’s the heart and soul of the Bat-family. People look up to him because he hasn’t let that crushing Bat-darkness hold him back. He loves being a hero and wants that to spread to everyone he works with. Dick even says he owes it to his family to be their net and catch them whenever they fall.

The entire crux of Seeley’s first story is about Dick trying to be that net for those he loves by dismantling the Court of Owls from within while regaining his Nightwing identity. All the while he gets paired up with an assassin named Raptor who seems to have his own agenda for the Court and some sort of hidden past with Dick. Raptor is able to get the job done in ways that Nightwing can’t even fathom. Despite him being an ass, Dick sees he is going to have to learn from him in order to accomplish his goals to save his family.

While the story does have dark moments, Seeley manages to see the fun in these situations by having Nightwing fight Kobra (can’t stress enough how much I love a snake cult), navigate a murderous labyrinth house, juggle his relationship with Batgirl, and battle sea monsters. Dick being raised by the circus and then growing into Batman’s number two makes these kinds of things seem normal to him. He ducks and weaves through all the horror while maintaining his smile. It’s a blast. 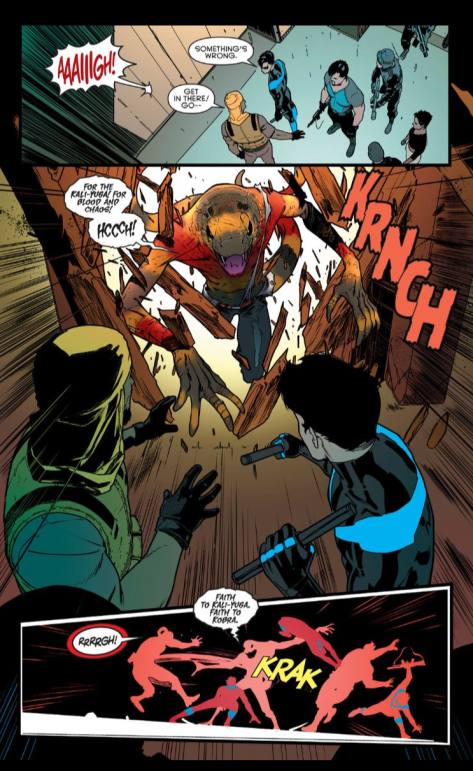 All this crazy fun would be nothing without artist Javier Fernández and colorist Chris Sotomayor. Their art does remind me of the circus in how frenetic they make all the action. All the fight scenes have a clear perspective and the action seems so fluid. The book has a lot more color than your average Batman book with Dick’s blue and Raptor’s gorgeous orange highlighting most pages.

All in all, Nightwing was my favorite find of DC’s Rebirth project. The first arc (albeit interrupted by a fun crossover for two issues) is an intensely satisfying story about Dick’s many familial relationships and how he is the cornerstone of all of them. Plus you get to see a lot of snake people get punched.