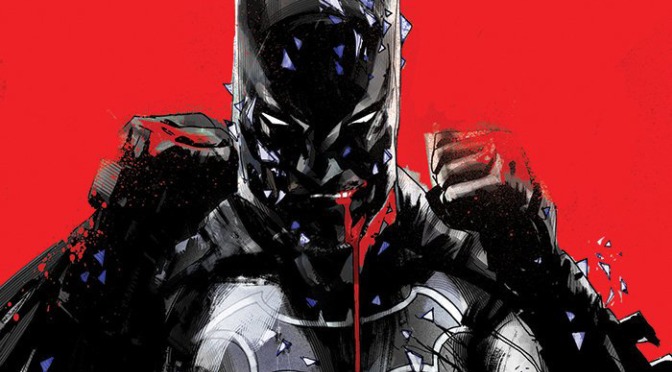 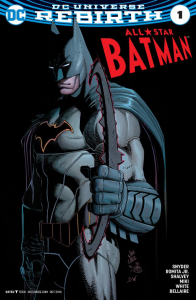 Hold onto your seats boys and girls, because Scott Snyder is about to put Batman through his paces. So far, Rebirth has been filled with lots of highs (See Trinity) and even more lows (Blue Beetle and Suicide Squad); this book stands with the former much more than the latter. All Star Batman is a journey that departs from the three other simultaneous Batman stories happening in Rebirth, but may actually be the most important going forward due to the potential ramifications.

This is a story of Batman at, arguably, his most heroic. He’s appointed with the task of bringing Harvey Dent, aka Two-Face, to justice with the whole world against him. Like really against him, with a threat/wager by Two-Face that he has so much dirt on EVERYONE in Gotham that he’ll release it all if he goes to jail. So he has to deal with the psychological warfare against his friend-turned-villain as well as random villains popping up to take their shot at The Bat. This plot reminds me a lot of the movie The Dark Knight when Joker tries to get the whole city to kill one guy. So while not entirely original, it makes for a great plot point allowing old villains to emerge, not to mention juicy plot twists when we discover that those close to Batman may have secrets they don’t want revealed either. The best thing in this story so far is the subplot of villains trying to one-up each other in all the chaos. At one point Dent is dressed down by the likes of the Penguin for being a second-rate villain, which is great because the villain hierarchy is something that isn’t often addressed, especially not in such an entertaining way. 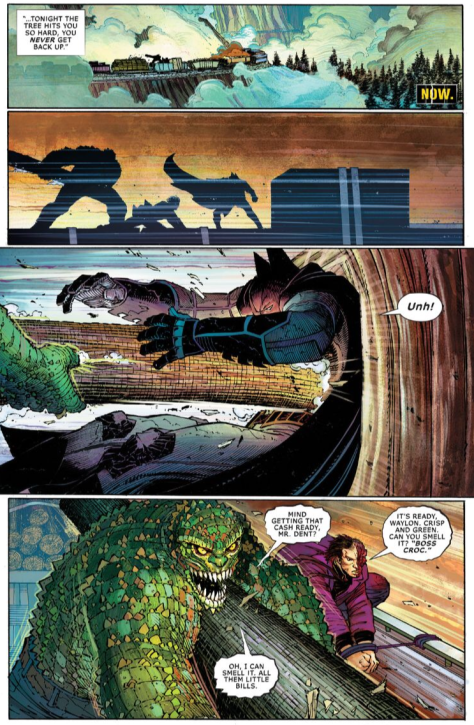 First – I need to get a few things off my chest. For me, the idea that Bruce and Harvey go back to being elitist prep school kids that were sent off to a troubled youth boarding school where their names were taken falls pretty flat. The idea that Bruce and Harvey have their own little friendship and secret project together is fine, but please don’t set up a throwback story about their lives as children. We just don’t care, really. The idea that Alfred would turn on Bruce because of a secret Harvey knows about him, to never be addressed again, is going to haunt me. Last I checked, Batman is one of the world’s greatest detectives, and it’s hard to imagine what Alfred, of all people, could have done that would spur such ire from Bruce that he’d rather have Bruce killed.

The most maddening thing, though, is probably when they talk about how everyone thinks Bruce Wayne is Batman but no one can prove it so it must not be him. That’s a conversation that should never take place or should be a launching pad into its own story about Batman losing or rebuilding a secret identity. Not just an off-hand conversation. It amazes me that he’s dealing with issues for which help from any Justice League member would, I assume, be greatly appreciated. Flash is at a pizza party, Wonder Woman is changing costumes, Nightwing is also at the pizza party, or doing undercover work that would not allow to be at said party, and Superman is ignoring most problems as usual, hanging out on a farm ignoring his responsibilities. So no one has time to look at the news and see that Batman’s identity has been discovered and he’s on the run for his life. 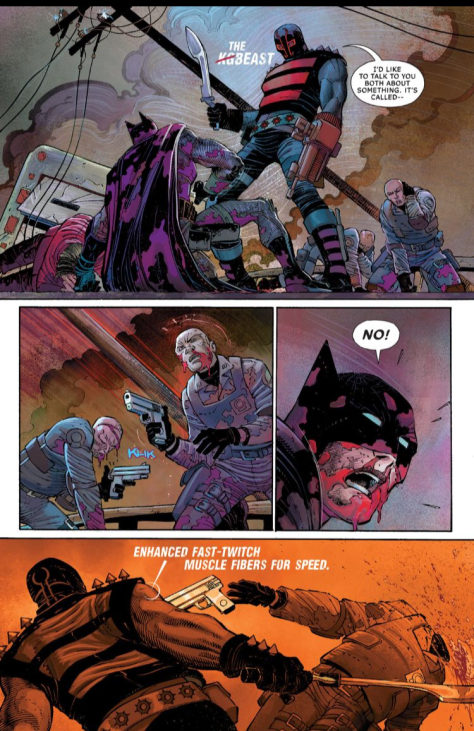 As for the side story about Batman’s newest ward and his education on “The Wheel,” I actually find myself increasingly intrigued. The idea that Batman has a step-by-step system to make someone into Batman, not only physically, but as a stellar detective as well, but wants to create a less threatening more Daytime-esque hero is fairly novel and can even play well into a story about the lack of Superman. All that said, I feel like Snyder must have watched The Mask of Zorro as he made this because I’m getting deja vu of Antonio Banderas’s Zorro training. That, and the yellow bat suit with nunchucks looks silly.

All in all this a good book with an interesting story to follow. Probably more so than the other couple Batman books being put out with Rebirth. There’s a special place in my heart for the use of villains to tell the story as a hero, since I feel a hero is only as interesting as his villains. So the idea of The World turning on The Bat for trying to do the right thing is just about as Batman as a story can get. This book illuminates the things we most love about Batman as well as the darkness that continues to exist within Gotham, despite his best efforts.

One thought on “The Best of DC Rebirth #3: All Star Batman”