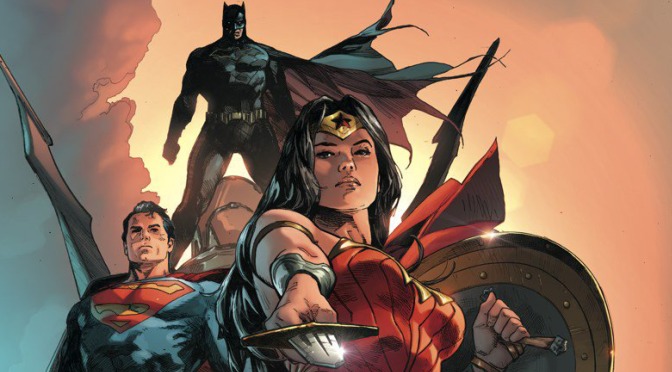 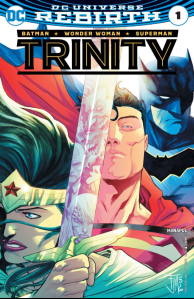 The triangle is a mystical shape. It lies between the circle, representing woman, and the square, representing man. It is the shape of mages, wizards, and cults. It can be found hiding in the periphery of U.S. dollars, where it surrounds the Eye of the Beholder, containing its scopeless view. For ages man has used the triangle to advance science, from the theorem of Pythagoras to the inventions of Hipparchus, whose Trigonometry persists today as an essential mathematical study, triangles are a shape consistently at the forefront of discovery.

A trinity though, is a triangle composed of people.

Trinity is a simple enough idea; create a story centered around these “big three.” It doesn’t need superfluous comic relief, nor outrageous villains of the week. It doesn’t need labyrinthine narratives that spin its characters into places never before seen. It needs its heroes to simply be, together and unencumbered by excess. It needs them to act as their truest selves, with and against one another. It needs them to be strong.

Each vertex of the titular trinity exists as a balance against the other two. Superman sits at the top, the most powerful of any hero, the furthest removed from humanity. He is a god resting at the apex of a pyramid. 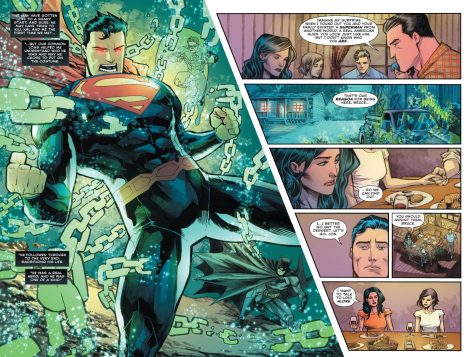 To his left is Batman, humanity’s greatest achievement, the human spirit personified. He stands as a reminder to Superman that even though the Man of Steel is the strongest, he is the smartest, the most determined, the one who has mastered the very idea of learning and transformed it into a weapon. 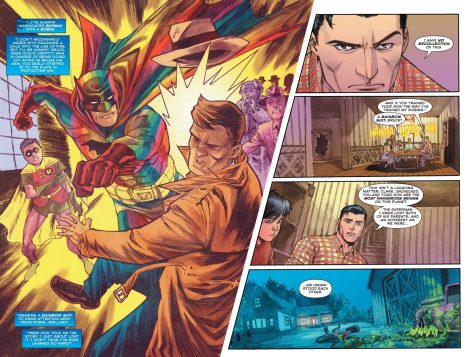 To their right stands Wonder Woman, the lone female, cornered on both sides by men. She represents humanity’s past, our Classical Era. Seemingly a woman out of time, she is also a woman of her time, accustomed to being taken seriously, now struggling against misogyny and ignorance, in a world she does not fully understand. Wonder Woman is the critical element of Trinity, the factor that elevates the concept above a simple pairing, team-up, or exercise in the kind of hero vs. hero storytelling that comic books have come to overuse. Her demigod status casts her as a deity caught between worlds, a Titan in the age of the New Gods.

Each piece of the trinity pushes immensely on the other two, but whereas other shapes would snap under the pressure, a triangle is made stronger by force.

Francis Manapul has created something truly special with Trinity. As both writer and artist he is able to convey his idea without any interference, without a hint of miscommunication. In order to craft a story about the ultimate collaboration in comics, the traditional idea of collaborative comic book creation had to be discarded. While there are certainly other people who deserve credit for the greatness of Trinity, namely Steve Wands, whose craft of lettering is not nearly as respected as it should be, and editors Paul Kaminsky and Eddie Berganza, though it is often known only to those involved exactly what the editors of a comic book have specifically contributed, the fact remains that Francis Manapul is chiefly responsible for the story and artwork of Trinity.

The first aspect of Manapul’s brilliance to consider is his art, more specifically his work with color. By tying each character to one of the primary colors, Manapul creates a system not unlike a color wheel with which to tell their stories. Superman is red, the color of blood, whose superior alien body makes him a living god. Batman is blue, often considered the most beautiful color, humanity’s favorite, but he is also cold, calculating, and dispassionate. Wonder Woman is yellow, or more specifically gold, like an ancient crown. She glows in a sea of passion and pragmatism. Her wristbands deflect the devices of mankind propelled against her, their hatred, their fears, and even their bullets. The trinity as a color wheel is not a new concept, but it has never before been used so effectively.

Surrounding Manapul’s magnificent colors are impeccably inked lines, consistent and clear, direct yet fluid, and in service to his story on every panel. Superman appears to be chiseled out of stone or metal, Man of Steel indeed. Batman a bit softer, only able to achieve the peak muscular firmness that a human body allows, but he is also a bit more attractive, perhaps even prettier than his alien counterpart. Wonder Woman is softer still, but with a brawn that could only be called divine. She first appears carrying a wild boar over her shoulder, sporting a wide stance, yet somehow still feminine. Her red lips and blue eyes rest stoically beneath her golden tiara and flowing black hair.

Strange it is that each of these heroes should have black hair, but it makes a certain kind of sense. Black hair lacks connotations in the same way that blonde or red hair does. It is the lack of true color that makes black hair so effective for these heroes, as it allows the colors they represent to come through even clearer.

Behind Manapul’s strong lines are softly painted environments. From golden fields of wheat, to the deep violet of the night sky, his backgrounds manage to support his foregrounds fully. Even Wonder Woman’s invisible jet is rendered beautifully in a brush of watercolor. By using such a soft medium Manapul creates a balance between his fields of action. The eyes of the reader are drawn to his strong lines, to his strong characters, but if one looks more closely there is plenty to be rewarded with. The best example of this is also an example of Manapul’s precise use of two-page spreads. Each hero is introduced via such spreads, Wonder Woman first, boar over her shoulder. Batman enters second, flying toward the reader from his Batplane, surrounded by the winged creatures from which he takes his name. Superman appears last, a few pages behind the other two. He flies into Trinity over the water, then dives in, before emerging from his barn to put on his real costume as Clark Kent. By paying close attention to this set of pages the reader sees that the spread itself is in the shape of Superman’s classic diamond insignia. Surrounding the shape are gorgeously painted panels in gold, violet, and blue depicting his journey home. A reader could spend several minutes simply appreciating these pages, but more than the artwork, what makes Trinity such a success is its writing.

Trinity #1 takes place almost entirely on Kent Farm. Superman and his family have extended an invitation to Batman and Wonder Woman to attend an evening dinner, the purpose of which is to establish the three of them as more than a group of heroes, but as a family. What makes such a task so difficult, apart from the massive personalities each character sports, is that the Superman of this world has died. The Superman who resides here now is from another Earth, married to that Earth’s Lois Lane, with a superpowered child named Jon Kent to boot. As if that wasn’t complex enough, Wonder Woman loved this world’s Superman and was crushed by his death. She and Lois establish that the man now wearing the mantle of the House of El is not the man Diana loved. At the same time Superman and Batman establish that their relationship is tenuous at best, as a precaution of course. Bruce Wayne has never been quick to trust new people, and his skepticism of the new Superman is certainly justified. Meanwhile, Superman is hesitant to become involved in his usual heroics on a new world, especially since he is supposed to be dead. Lois Lane though, ever the true strength behind the Man of Steel, recognizes that these three are special. She recognizes that their bond is the strongest in the universe, capable of triumph over insurmountable odds. She has a son to protect, after all.

Focusing the first issue of a “big three” comic on out-of-costume dialogue over the dinner table is a bold strategy, but it pays off. Comic book readers have other books in which to get their superpowered punching and laser deflections, though Trinity does have a bit of that too. What the current slate of DC Comics was lacking was a more thoughtful approach to superhero storytelling, which isn’t to say that other comics released by the publisher under the Rebirth banner aren’t thoughtful, just that none have so much to live up to as Trinity does.

Manapul uses copious narration to achieve the complex goal of establishing the world his book is set in, allowing his dialogue to focus squarely on the relationships between the five characters present in the first issue of the book. He begins by setting the stage of Kent Farm, specifically reintroducing readers to this new Superfamily. Jon Kent is different than young Clark was, his father is the most powerful person on Earth, which triggers in him a desire to use his powers, both as a means of expression, as well as a way to make his father proud. While Lois tries to contain her son’s powers by giving him strict rules about when to use them and when not to, but when two strangers come to the door Jon Kent mistakes x-ray vision for laser vision, blasting them. Luckily Diana Prince never takes a day off from being Wonder Woman, leading to one of the first issue’s only moments of superpowered action.

By withholding the action, Manapul is able to bring the focus of his book to the people behind the powers. While that approach could make for a boring read in a lesser writer’s hands, it works well in Trinity because there are still conflicts to resolve. Batman doesn’t trust Superman, Lois wants to assert herself to Wonder Woman as Superman’s wife, and Superman himself doesn’t exactly want to be this world’s hero. Each thread plays out like a battle, with sides gaining and losing ground before conceding. By the end of the first issue, Wonder Woman acknowledges that her Superman is dead, so she isn’t attempting to step on any toes with Lois, while Batman recognizes that even though this Superman is different, and his son is a new factor to consider, he and the dead Superman understood one another. At the same time, rather than regretting unveiling himself to the world, the new Superman only worries what effect it will have on his son.

Francis Manapul has created a special book with Trinity, a book with lofty ambitions, gorgeous art, and most importantly, something to say. It is one of the most exciting superhero books to come out of the DC Rebirth initiative. It might be the most exciting superhero book in years. While the many comics at the bottom of the list might have broad appeal, they often lack a certain ambition. As one climbs the list, the focus of each book tends to narrow, culminating in Trinity at the very top with its singular focus. A shining point at the top of a tower. The golden pyramidion of the comic book world.