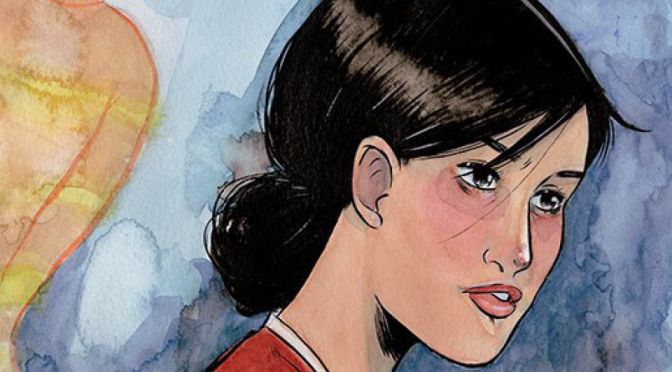 Jeff Lemire already dominates the comic book shelves. Whether it’s his outstanding creator-owned series for Image and Dark Horse, his superhero work for Marvel and Valiant, or the bookcase full of Vertigo trades and original graphic novels, the indefatigable Lemire already has your attention. And deservedly so. But his new Image book may deserve the most attention of all. Royal City is at once a return to the comics work that first introduced us to Lemire almost a decade ago, and, at the same time, something unlike anything he’s done before.

Like the graphic novels that comprised his Essex County trilogy, beginning with 2008’s Tales from the Farm, Lemire’s new book is a realistic family drama set in smalltown North America. Unlike those singular, well-defined stories, however, Royal City is an ongoing title, a format that lends itself to longer “seasons,” if you will, and an opportunity to fully explore the Pike family and the human tremors that epicenter from the titular town. In his afterword, in fact, Lemire mentions being inspired by this Golden Age of Television. And I have to say, the first thing I thought of after reading this first issue was Netflix’s Bloodline. There’s a shaky familiarity to every tense exchange, every terse comment, like the way you’re afraid of a Eugene O’Neill play because of the truths it uncovers.

The inciting event, family patriarch Peter’s stroke, brings the three siblings and their associated baggage into focus. Patrick returns from the big city, where he’s a novelist struggling against writer’s block; Tara is a real estate developer looking to turn the city’s manufacturing center into a resort community; and Richard works at the aforementioned factory – or would work, if he was ever sober. And then there’s one more sibling, Tommy, who moves through the narrative as a haunting memory unique to each family member.

We’ve been reading plenty of Lemire books lately, but it struck me that, apart from variant covers and his work on After Death with Scott Snyder, it’s been far too long since I’ve been able to appreciate Lemire’s art. His style is raw, like the emotions each Pike is unable to cope with, but with a brilliant attention to detail, creating a comic that is a layer of puzzles and mystery. It’d be more haunting if it also didn’t feel so disturbingly real. Royal City is a story that perfectly intertwines ghosts and the even more terrifying, the living. 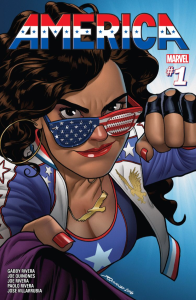 Marvel NOW! Week 22
First let me just say how much I love the fact that Marvel is publishing a comic entitled America, that features a “super-strong queer brown girl.” Damn right – this is America. And if Ms. Marvel hadn’t already done the bigot-punching homage to Captain America, America Chavez would have been the likely next choice. Alas, the comic itself, despite fairly clean art with a vibrant color palette, isn’t winning any other points in the originality department. America enrolls in an interdimensional high school for super-folks, and overuses her “do the work” mantra while trying to convince the reader that it makes sense to abuse Prodigy’s time travel machine. This is YA novelist Gabby Rivera’s first work in comics, and I love the idea so much that I’m willing to give it a chance. Jury’s still out after this first issue.