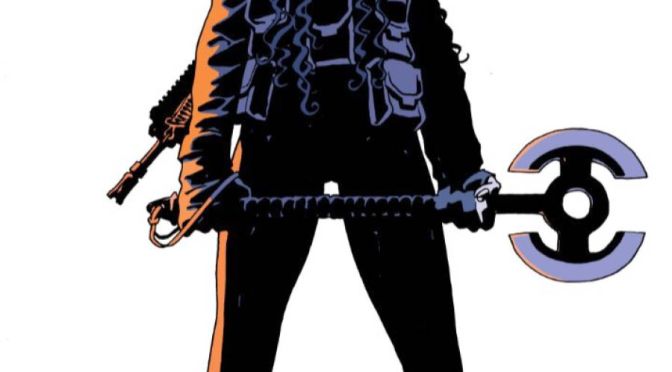 Funny guy, that Greg Rucka. When he rebirthed Wonder Woman last year for DC, he unspooled much of the work Brian Azzarello and Cliff Chiang had accomplished during the New 52 era. And much of that reinvention involved separating Diana from the annals of classicism, allowing her a place in the comic book universe pantheon without worrying about dual citizenship in a Pantheon of the Ages.

But the veteran writer has a clear fascination with mythic heroes, and has no problem exploring the relevance of these characters and their legacy in the modern era. In his new Image series with artist Leandro Fernández, The Old Guard, legends of antiquity are rolled into Rucka’s wheelhouse: twenty-first century military operations and agency intrigue. And the best thing about the book is that you don’t have to have played a single minute of Call of Duty or watched an episode of Burn Notice to know what’s going on.

The focal characters are a quartet of nigh-immortals, who have battled and died over and over again across eras, geographies, and cultures. In this “fairy tale of blood and bullets,” the first identifiable warrior is Andy, who once, as Andromache, shared a bed with the noble Hector, tending the wounds of her husband as the Trojan prince steeled himself to battle against the mighty Achilles. Now Andy is bedding anyone with breath in his or her body, and taking contracts that pay the bills and keep the identities of her team a secret.

The series hits the ground running with an op gone wrong, the revelation of a new immortal, and more “budda buddas” than a Sgt. Rock omnibus. Fernández’s art has an elegant starkness to its lines and fluidity that remind me of the war comics of Hugo Pratt. But making the art downright gorgeous are the colors of Daniela Miwa, spilling across some spreads like sunsets, and ricocheting around panel transitions like gunfire.

Marvel NOW! Week 21
Although the NOW masthead hasn’t graced the cover of a Marvel book since last month’s Mighty Captain Marvel, we’re still calling this the NOW era until instructed otherwise. And as Marvel negotiates several mini-events, an imminent X-plosion, and the forthcoming Secret Empire, we’ll happily accept the smaller groupings of its books, like Matt Murdock and his Deadly Friends featured in the “Running with the Devil” line. In addition to the obvious Daredevil, this quartet of comics includes the Bullseye mini-series by gritty up-and-comer Ed Brisson, Rosenberg’s Kingpin, and this week’s Elektra #1, by Matt Owens and Juan Cabal. The increasingly less enigmatic Ms. Natchios is in Vegas for some reason, and this first issue sets up a storyline that pits her against the B-list (C-list? This guy sucks) villainy of Arcade. Cabal’s artwork has that glossy, almost digital quality that works so well in some books, and doesn’t fit in others. They’re like frozen animation cels, and the sequences that should be more action-packed are somehow devoid of life and movement.