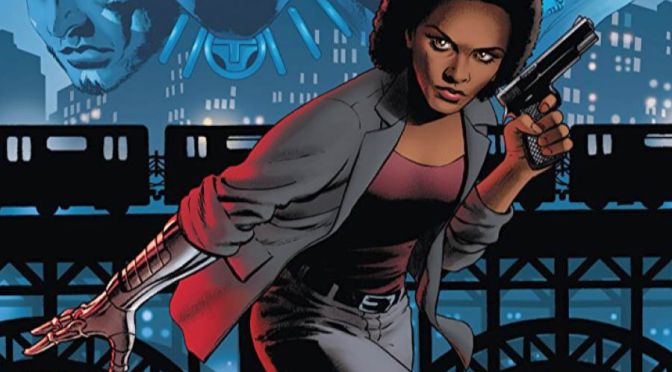 Both Marvel and DC have engaged a number of prominent novelists and screenwriters over the last few years, giving these writers their first opportunity to pilot a monthly comic book series. Invariably, every one of them opens a press conference or interview with the same caveat: I don’t know what I’m doing, but I love comics and I love these characters. It’s been hit or miss for the most part; comics is its own storytelling medium, and it often takes time for a writer to ably adapt his or her voice to accommodate the differences. But once in a great while, an author really figures things out. No growing pains, no collaboration difficulties, and no real sense of inexperience. A year ago, Ta-Nehisi Coates took the reins of a heralded Black Panther relaunch and delivered one of the best superhero comics on the shelf. But he hasn’t stopped there: there’s an entire corner of the Marvel Universe that has expanded and thrived under his direction. First with a further exploration of Panther‘s supporting cast members and Wakandan folklore in World of Wakanda, and now, this week, Coates flexes his muscles beyond the homeland in Black Panther & The Crew #1.

Inspired by the orignal “Crew” story from Christopher Priest’s Panther run, Coates has partnered with Yona Harvey (another esteemed writer from a different medium quickly proving her mettle in the comics biz) and veteran artist Butch Guice to showcase street-level superheroics in a very different jungle: New York City.

Misty Knight and Storm are the first two members of this modern Crew to take center stage, as they investigate the mysterious death of longtime Harlem activist Ezra Keith. As this story unfolds, we can expect revelations regarding the untold story of an NYC super-team from the 1950’s, as well as a critical look at the growing fomentation of fear and violence in our own country. It’s an exciting new book from a writer who clearly wants to expand his scope in the superhero storytelling department, and a wonderful indication that Marvel recognizes a good thing when they see it.

ResurrXion: Week 3
The way Guggenheim established a return to the next-gen greatness of Claremont & Byrne in last week’s X-Men: Gold, you would have expected this week’s X-Men: Blue, featuring the time-displaced Original Five, to focus on recapturing the feeling of classic Lee & Kirby tales. And you wouldn’t be completely off-base. The principal antagonists in this opening issue, in fact, are Juggernaut and Black Tom Cassidy. But Cullen Bunn clearly has a lot more up his sleeve for this book. If the crazy reveal in the epilogue doesn’t get you, then the bevy of teasers on the final page will. Here’s hoping for an all-new all-old altogether surprising jaunt through mutantkind past, present, and future.