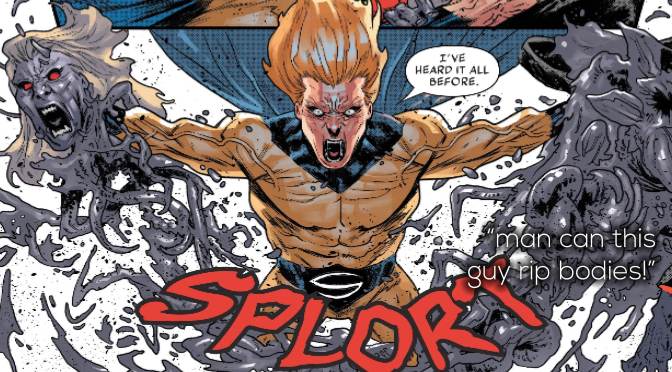 Ask the prolific Eisner-winning Lemire, whose recent successes include a love letter to Golden Age superheroes, Black Hammer, and various journeys into the fractured psyches of humanity, both powered and otherwise, as seen in Royal City and Bloodshot, who is the one Marvel character you’d most like to revive? Moon Knight. Okay, you’ve done that. Who is the next Marvel hero on your list?

Gotta be The Sentry. This first issue is rife with classic capes n’ tights bombast, juxtaposed brilliantly with real human struggles — a Robert Reynolds that looks like he was pulled fresh from the towns of Essex County. In fact, Kim Jacinto’s art, when it isn’t aflame with dynamic action sequences, even resembles Lemire’s illustration style, sketchy and expressionistic with every shade of human emotion wonderfully styled. – MMDG

When I saw that a new Sentry book was out, I was skeptical. The Sentry is a lot like Superman in that it’s hard to come up with scenarios that can seriously threaten them and make for suspenseful and dramatic stories. I think Superman writers overcome this with solid character writing and an exploration of his personal psychology. Seeing Lemire’s name on this book inspired confidence and it wasn’t misplaced. Lemire is the perfect guide to further explore a character that I feel is hard to write for, and has ultimately made him underutilized in the books. The situation Bob finds himself in, literally living two lives, is a great take on the super hero/alter ego concept, and I gotta say, I’m happily growing sympathy for the character. Part of that is the writing, but I immediately noticed Jacinto’s strong facial expressions. They’re intense! His illustration strengthens the juxtaposition of the golden guardian to the dark void and underlines this particular book as a psychological horror story. This could be the defining story for this character, and I’m excited to see where Lemire, Jacinto and co. take it. – tyrannofloresrex

Man can this guy rip bodies! Great art — despair with a hint of imbalance — match the tone of the story. And I’m a sucker for a cliffhanger so I’ll probably pick up #2 to see who the villian is. – lebronald 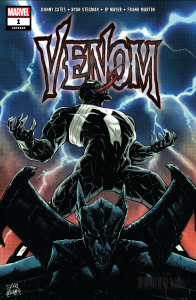 Stegman has really managed to turn his art into some next level stuff. I will keep reading as long as he is on the book. The opening Norse segment looks so good. I like Cates’s direction of making the symbiotes more of an ever-present part of the MU. Reminds of the Brubaker/Fraction Iron Fist run. Still not the biggest fan of the symbiote in general but this is well written and has a good mystery. I am intrigued enough to want to continue with this one. – MeanOldPig

I love these red faced aliens. I hope it stays dark and gets creepier. – lebronald

Still not a fan of the character, but Donny Cates has done marvelous things with Dr. Strange and Thanos in recent months, and Stegman’s art is unbelievable. I’ll be reading this. – MMDG

END_OF_DOCUMENT_TOKEN_TO_BE_REPLACED 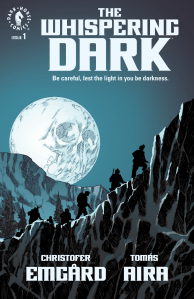 While I acknowledge that good, spooky entertainment shouldn’t be relegated to a certain season, I am particularly excited each October to see movie marathons on streaming networks, horror blockbusters on the big screen, and an inordinate number of creepy titles popping up on the new release comic rack. Of course, this could just be because I’m looking for something in that vein, but… whatever the case, I was glad to see Dark Horse’s The Whispering Dark #1 on the shelf this week. The comic, by Christofer Emgård and Tomás Aira, combines two of comics’ most popular genres of ages past — horror and war — and offers something that would have made Bill Gaines proud.

The Swedish author, best known for his acclaimed video game writing, is crafting a slow-burning mystery that combines the psychological terror of combat with elements of the supernatural. The series opens with an Army pilot, Hannah Vance, taking over as de facto commander of a party of soldiers shot down and caught behind enemy lines in the mountainous forest of some unnamed war.

END_OF_DOCUMENT_TOKEN_TO_BE_REPLACED 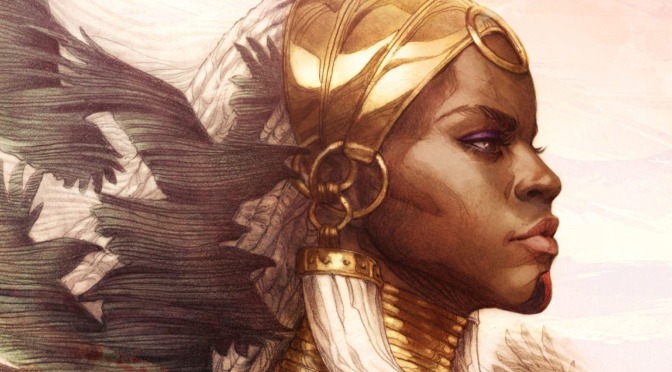 We’re coming up on the six-month mark of Marvel Comics’s “Fresh Start,” an informal publishing initiative that began with the release of Jason Aaron and Ed McGuinness’s new volume of The Avengers back in May. The initial flurry of #1 issues solicited under new EIC C.B. Cebulski’s direction, however, seemed anything but fresh. His promise of a creative shake-up that would include “new creative teams, new titles, new directions, and new beginnings,” appeared as empty bluster at best and, at worst, a tragic concession to a closed-minded segment of Marvel’s fanbase that preferred the same-old to diversity and true creativity.

Artists and writers were merely shuffled to different titles; series were rebooted (again); new directions were just old scenarios that were being repurposed and repackaged. It seemed as if all the truly progressive storylines and interesting creators that had been a hallmark of Axel Alonso’s final years at Marvel were going to be swept aside in favor of bland mediocrity. I half-suspect that the same Russian bots that tried to torpedo The Last Jedi were likewise targeting any superhero comic featuring a strong female character.

As I soon discovered, however, diversity and creativity had not been stymied completely. And if malcontents were looking for another minority superhero to spotlight their ignorance, Shuri #1 provides a fantastic foil.

END_OF_DOCUMENT_TOKEN_TO_BE_REPLACED 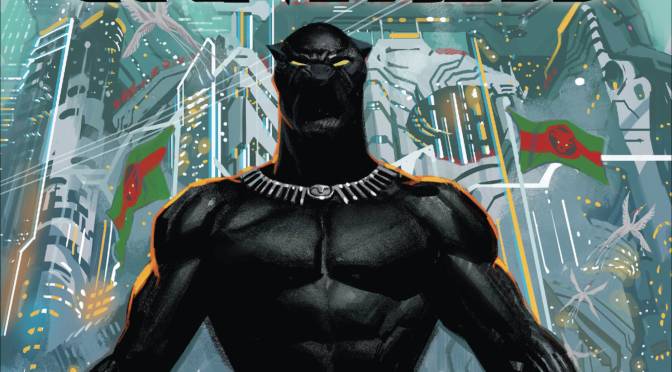 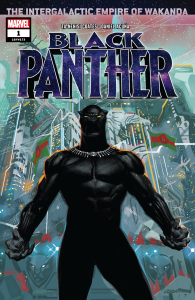 Another “Fresh Start” from the House of Ideas this week and, as with Aaron & McGuiness’s Avengers relaunch, the new Black Panther from Ta-Nehisi Coates and Daniel Acuña addresses teasers previewed in last fall’s Marvel Legacy one-shot. In this case, we had all been scratching our heads regarding that glimpse at a futuristic Panther planet somewhen and somewhere. It was just a single page, but it left us with a host of questions. The first issue of this arc, “The Intergalactic Empire of Wakanda,” answers plenty of them (right away, actually), and it raises quite a few more.

That preview page returns — the first page in this comic — this time with narration explaining that a small group of Wakandans left Earth some two thousand years ago to colonize a planet on the far reaches of the cosmos. Millennia later, these colonists’ warlike tendencies have put them at the center of an empire spanning five galaxies.

So that’s all pretty awesome. And a new mystery immediately comes into focus when T’Challa makes an appearance, with no memory of who he is or how he got there, working as one of the mind-wiped “Nameless” mining slaves. Also… Nakia! And M’Baku! And vague recollections of a certain silver-haired goddess who once shared the king’s bed.

END_OF_DOCUMENT_TOKEN_TO_BE_REPLACED

Both Marvel and DC have engaged a number of prominent novelists and screenwriters over the last few years, giving these writers their first opportunity to pilot a monthly comic book series. Invariably, every one of them opens a press conference or interview with the same caveat: I don’t know what I’m doing, but I love comics and I love these characters. It’s been hit or miss for the most part; comics is its own storytelling medium, and it often takes time for a writer to ably adapt his or her voice to accommodate the differences. But once in a great while, an author really figures things out. No growing pains, no collaboration difficulties, and no real sense of inexperience. A year ago, Ta-Nehisi Coates took the reins of a heralded Black Panther relaunch and delivered one of the best superhero comics on the shelf. But he hasn’t stopped there: there’s an entire corner of the Marvel Universe that has expanded and thrived under his direction. First with a further exploration of Panther‘s supporting cast members and Wakandan folklore in World of Wakanda, and now, this week, Coates flexes his muscles beyond the homeland in Black Panther & The Crew #1.

Inspired by the orignal “Crew” story from Christopher Priest’s Panther run, Coates has partnered with Yona Harvey (another esteemed writer from a different medium quickly proving her mettle in the comics biz) and veteran artist Butch Guice to showcase street-level superheroics in a very different jungle: New York City.

END_OF_DOCUMENT_TOKEN_TO_BE_REPLACED

This weekend, thousands of moviegoers who watched Captain America: Civil War got their first look at one of Marvel’s most historic characters, the Black Panther. A warrior-king from the fictional African nation of Wakanda, the Black Panther is surprisingly similar to Batman. Though he has strength, speed, and senses that are remarkably enhanced by a magical herb, the Panther relies on his intellect, and a slew of futuristic gadgets to overcome issues of super-villainy, as well as diplomacy. Created by the seminal creative duo of Jack Kirby and Stan Lee, and The Black Panther is the first Black super hero with meaningful characterization.

END_OF_DOCUMENT_TOKEN_TO_BE_REPLACED 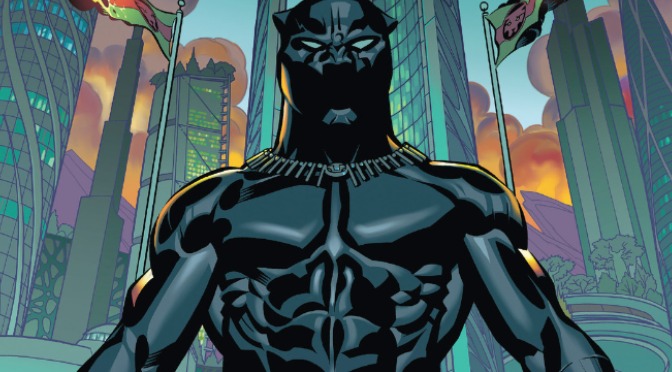 We’re still posting our rankings for the first six months of Marvel’s relaunch, but the hits keep on coming from the House of Ideas, and I don’t doubt that had we waited until All New All Different Marvel – Week 27 to tabulate results, Black Panther by Ta-Nehisi Coates and Brian Stelfreeze would have made the Top 10.

In an interview with NPR, National Book Award recipient Coates talks about how working with Marvel, despite his first experience writing comics, nonetheless makes him “feel back at home.” And home, in this case, is taking a character that debuted fifty years ago in the pages of The Fantastic Four, and making him powerfully relevant in the present. 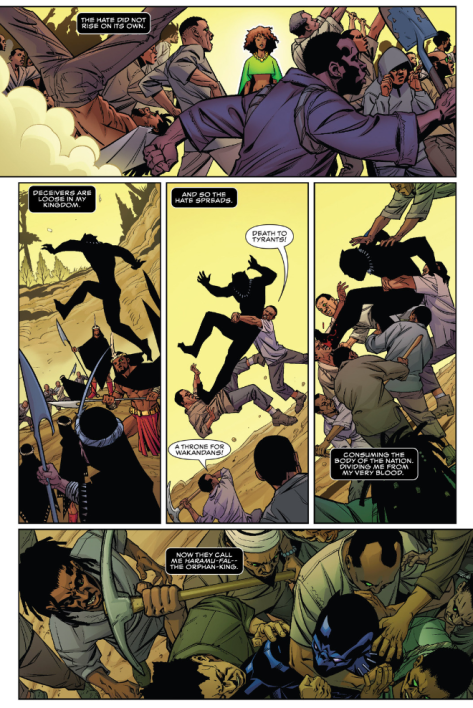 Given Black Panther’s impending appearance in Marvel Films’ Captain America: Civil War, and a planned solo movie, it would have been easy for the company to simply inundate the comic shop with team book appearances; new series, both limited and ongoing; and half-hearted attempts at putting his face on as many covers as possible. You know, like Deadpool.

Granted, T’challa is part of Ewing & Rocafort’s The Ultimates, but this Coates and Stelfreeze series is the definitive Panther book, and by no means  a requisite media tie-in. And despite a fair amount of back-story to churn through, including the current state of Wakanda, the fictional African kingdom ruled by the T’challa, this new Black Panther delivers on Marvel’s promise to offer an excellent jumping-on point for new readers. END_OF_DOCUMENT_TOKEN_TO_BE_REPLACED