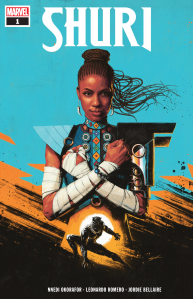 We’re coming up on the six-month mark of Marvel Comics’s “Fresh Start,” an informal publishing initiative that began with the release of Jason Aaron and Ed McGuinness’s new volume of The Avengers back in May. The initial flurry of #1 issues solicited under new EIC C.B. Cebulski’s direction, however, seemed anything but fresh. His promise of a creative shake-up that would include “new creative teams, new titles, new directions, and new beginnings,” appeared as empty bluster at best and, at worst, a tragic concession to a closed-minded segment of Marvel’s fanbase that preferred the same-old to diversity and true creativity.

Artists and writers were merely shuffled to different titles; series were rebooted (again); new directions were just old scenarios that were being repurposed and repackaged. It seemed as if all the truly progressive storylines and interesting creators that had been a hallmark of Axel Alonso’s final years at Marvel were going to be swept aside in favor of bland mediocrity. I half-suspect that the same Russian bots that tried to torpedo The Last Jedi were likewise targeting any superhero comic featuring a strong female character.

As I soon discovered, however, diversity and creativity had not been stymied completely. And if malcontents were looking for another minority superhero to spotlight their ignorance, Shuri #1 provides a fantastic foil.

The book opens with Black Panther and Manifold being shot into deep space in a starship of Shuri’s design (might this have some relation to whatever intergalactic intrigue is happening in the new volume of Panther?) And after several weeks without communication, little sister, as well as an assemblage of Wakandan representatives, begin to worry.

This first issue is a lot of set-up, but it’s a marvelous demonstration of an accomplished writer’s first full-time, ongoing comics gig. Okorafor’s dialogue is smart and well-paced, and she has a clear fondness for this character. Elements of technological wizardry are ably woven through a fabric of cultural mysticism and tradition. Together with Coates, Okorafor is helping expand this already rich corner of the Marvel universe. She’s also helping renew my faith in the company’s months-old promise of “new beginnings.” Shuri looks like the start of something special.