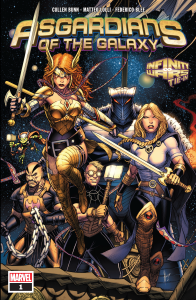 At the onset of Marvel’s current Fresh Start, the publisher made a predictably uniform push to give its marquee characters renewed rack appeal. The whole initiative kicked off with Jason Aaron and Ed McGuinness’s new volume of The Avengers and, in short order we had new #1 issues for fan-favorites like Deadpool, Venom, and Thor. From those first solicitations, there seemed to be very little “freshness” in the back-to-basics approach promised by new EIC C.B. Cebulski. Thor was a boy again; Peter Parker was a broke shmuck again. Tony Stark wasn’t dead, or in a coma, or whatever… and The Avengers looked more or less like the casual fan expected. I braced myself for a disappointing regression from the diversity, creativity, and artistic experimentation that had made Marvel stand apart from the major publishers in recent years.

Instead, I have been pleasantly surprised to discover that Fresh Start, while pandering slightly to the fans who couldn’t deal with a Black Captain America or teenage girl in Iron Man armor, has been replete with some genuine excitement. Creativity preempts the same old: Mike del Mundo and Christian Ward, whose fantastic art is outside the capes ‘n tights norm, get the nod to kick off Jason Aaron’s final Thor volume. Al Ewing and Joe Bennett re-imagine Hulk as a chilling EC-inspired horror book.

Most interestingly, however, peppered among the predictable #1 issues, is a host of oddball books and unexpected revivals. Jeff Lemire is writing a great Sentry. Matthew Rosenberg is allowed to bring Multiple Man back from the dead. Cosmic Ghost Rider — maybe as odd as it gets — graduates from the pages of Donny Cates’s Thanos into his own mini. And my favorite Marvel B-lister of them all, Valkyrie, leads a marvelously unusual crew of cosmic godlings in this week’s Asgardians of the Galaxy #1.

Writer Cullen Bunn reunites with his Deadpool artist Matteo Lolli to try their hand at a Marvel space drama, ostensibly spinning out of this summer’s Infinity Wars event. Really though (and I kinda hate to say this), but it seems like Bunn just wants another crack at scripting badass women who are in danger of making out with one another. Valkyrie, who Bunn mismanaged in his Fearless Defenders book, is still doing the Captain Marvel/Rick Jones body-swap-timeshare thing with lovestruck archaeologist Anabelle Riggs. Angela, she of the newly discovered Odin lineage, hasn’t been much heard of since that assault on Hel to save her beloved Sera in Marguerite Bennett’s series. The rest of this team is a weird assemblage of Asgard-adjacent characters: the new Thunderstrike, Frog-Thor, The Executioner, and a surprising (albeit charmingly confusing) fella in the Destroyer armor. Really though (and I kinda hate to say this), but I might just be reading this to see those badass women make out.

Much like Ahmed and Rodriguez’s Exiles, the prospects of this book are engaging, but the initial issue founders somewhat with limp writing and a humdrum plot. I want to get behind this book — and every other atypical title in the Fresh Start stable — but you’ve gotta give me something more to work with, Bunn. When I saw Valkyrie reappear in the pages of Aaron & del Mundo’s Thor earlier this month, it almost made me angry. Here’s a creative team that can really do something with the crazy corners of this pantheon! I’m in for now guys; show me something exciting (and maybe ditch Thunderstrike). Angela & Brunnhilde can’t make me buy a book on their own. (Actually, yes they can. But I kinda hate to admit that.)