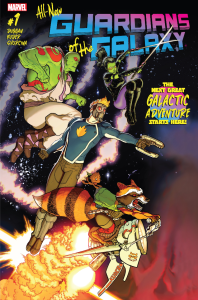 No surprise this week, folks, as Marvel rolls out a high-profile relaunch of one of the most surprisingly successful properties in comics, just a few days before the box office premiere of the new movie. All New Guardians of the Galaxy #1, by Gerry Duggan and Aaron Kuder, couldn’t have come at a better time, either. Not because folks need some shelf eye-candy when they peruse the new release racks after leaving the theater, or during Free Comic Book Day this Saturday, but because the last few months of Guardians has been insufferably bad. Bendis is still one of the best funnybook scribes in the business, but it’s been pretty clear where his energies have been devoted. The way he phoned in Civil War II and, especially, the last year of Guardians, makes me hope he never gets assigned to another team book or major event again. Say no, once in a while, BMB. Leave the insane capes n’ tights output to the younger set; Jeff Lemire is still hungry.

But I digress. The new book is tantalizing eye candy for both casual readers as well as longtime fans hungry for a return to form. The fact that Kuder is providing the art is almost good enough, by itself, for me to sign on for a full arc. Marvel fans may not be too familiar with his work, but his Frank Quitely-inspired artistry had been on display on various DC projects over the last few years. He’s found a welcome home on a major Marvel book, especially among those of us who wished Arthur Adams could have been doing more than just Guardians covers. There’s a mix of startling intricacy in his linework, but it’s combined with a fluid dynamism that not only complements the humor of Guardians, but also fits wonderfully with Marvel’s trippy cosmic legacy, from Steve Ditko through Jim Starlin. Also, thank you for restoring Drax and Gamora to their pre-movie designs. 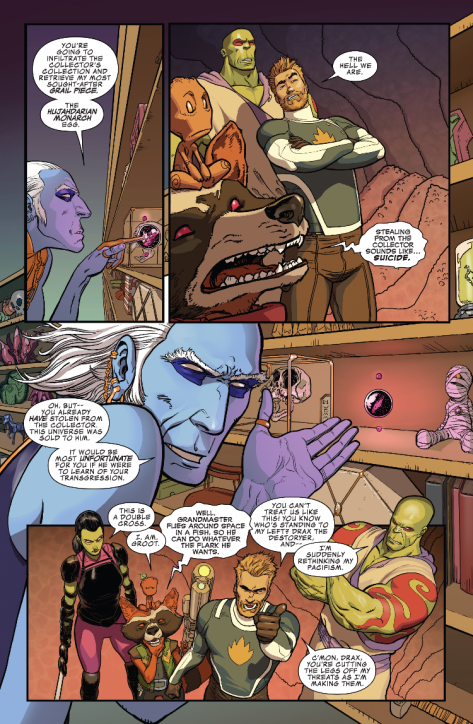 Gerry Duggan, underappreciated for his work on Uncanny Avengers during the All-New All-Different era, has a knack for combining inventive plots with a touch of humor, with a proven ability to make those elements work on a team book. The dynamic with Guardians has been well-established, both during this team’s first Annihilation incarnation, as well as in the movie franchise. The excess baggage (Thing, Kitty Pryde, and Venom) has been jettisoned from the Milano, and we’re done with random bouts with Thanos or obligatory visits to Earth for CWII bullshit. We’re back to basics. With a few corporate mandates in tow (see: Baby Groot), this is the team that works, and they’re cruising through the cosmos doing what they do best. Blowing stuff up, stealing artifacts, and saving the galaxy in spite of themselves. This should be fun.