Right around the end of Civil War II a number of us in the Institute’s comic book studies department wagered on which character Marvel would bring back to print first: The Hulk, Iron Man, Professor X, Logan, or Mr. Fantastic. Right away there was debate as to whether Tony Stark ever really left comics, what with his A.I. ghost still haunting the pages of Riri’s monthly; whether or not the Hulk samurai zombie in Uncanny Avengers constituted a return; and whether or not Reed & Sue’s disappearance at the end of the recent Secret Wars was anything more than an acknowledgement that they were written off because of the evil machinations of 20th Century Fox, and not a Beyonder-level Doctor Doom.

Less than two years later, four of the five are back (in one form or another), with the Fantastic Four set to re-emerge as part of Marvel’s fresh start later this summer. The point is, superheroes and supervillains never stay dead, and while the significance surrounding their extended sabbaticals from comics becomes less and less newsworthy, we’re increasingly more interested in how the storytellers choose to resurrect them. Honestly, these are the stories that seem far more compelling.

Case in point, Logan, the original Wolverine, is back in the Marvel U. And writer Charles Soule follows up his Death of Wolverine mini-series from 2014 with this week’s Hunt for Wolverine #1, part of a multi-series event that will occupy far more rack real estate in the coming months than his demise ever did. 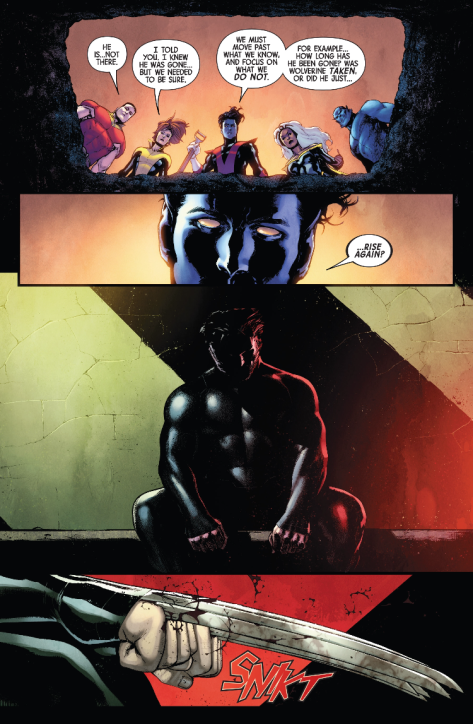 It’s not as though we’ve been starved for a Wolverine ever since Logan was enveloped in molten adamantium, however. Laura Kinney, X-23, has done an admirable job taking up his mantle beginning with the ANAD launch. Old Man Logan entered the 616 at the same time, and seems to have made his best effort at sticking around. Daken is back, freaking Jimmy Hudson is on the X-Men Blue team, and we even have an actual wolverine named Jonathan kicking it with yet another clone going by the codename Honey Badger.

But we knew that none of these characters would ever truly replace Logan, just as sure as we knew that they’d bring him back at some point. We’ve already seen him strolling through “after-credits” pages in various comics since Marvel Legacy #1 clutching what we now know is the Space Stone. But this new series — and its requisite spinoffs — suggest something else is going on. After setting the stage with a revelation as to what really happened in the days following Wolverine’s death, we learn that his body is missing. Then there’s a weird getting-the-bands-together moment as different teams assemble to search different leads in different parts of the world. It almost discounts the cowboy hat-wearing hobo sequences that we thought were a big part of the “Where Is Wolverine” tease. Now it seems like maybe he’s holed up in someone’s basement looking a lot more clean-shaven and youthful than we’d expect? Oh please don’t introduce us to yet another Wolverine…

I have lots of questions. Luckily there are four different fucking “Hunt for Wolverine” tie-in series (one for each team) to help answer them. I can pretend that I don’t care enough, and will be fine with checking in on the eventual Wikipedia article, but… who am I kidding? The first issue of Hunt for Wolverine: Weapon Lost, featuring the oddball team-up of Daredevil, Misty Knight, Cypher, and a NuHuman, drops next week.