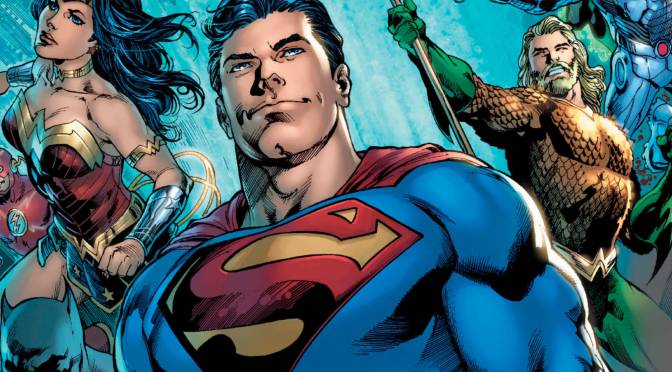 Yeah, I get it. Former Marvel Golden Boy jumps ship for the competition and his first major contribution is a limited series on the industry’s most iconic figure.

John Byrne rose to prominence at Marvel during the 80’s, first as part of the Uncanny X-Men revival alongside Chris Claremont and Dave Cockrum (as well as a run on Avengers that made me a lifelong fan), and then writing and illustrating a seminal run on flagship title The Fantastic Four. His high-profile departure for DC began with a post-Crisis reboot of Superman in 1986’s Man of Steel limited series. Three decades later, and another major contributor to Marvel’s pantheon, Brian Michael Bendis, makes his celebrated DC debut (minus a few teaser short stories) in a Superman mini titled, of course, Man of Steel.

I’ll admit to not having paid attention to press leading up to this series and, as a result, this obvious correlation to Byrne’s DC tenure didn’t dawn on me until I had picked up this new book. And I think it’s a bad move.

Is the goal to strike a parallel to prior reboots? Or is DC trying to draw attention to the fact that Bendis, like Byrne, was essentially lured away from the competition to work on a high-profile series, a snarky gloat immortalized in publication history? If it’s the former, then it seems like this series title would have made more sense as part of their recent Rebirth initiative. But if it’s the latter, then it seems like a childish ploy, particularly given the fact that Byrne ended up returning to Marvel after just a few years. It would also undermine the sentiment of virtually every comic book fan, DC and Marvel alike, who applauds Bendis’s move, seeing it as an opportunity for the tapped-out creator to refresh his own psyche and get back to writing compelling comic book stories once again. Maybe that’s the real meaning behind the title! Brian Michael Bendis is getting the reboot — he’s the Man of Steel! But… probably not. It’s more than likely just a wink and a nod.

And maybe it doesn’t fucking matter in the slightest and I should move on to talking about whether or not I liked the book.

Because I do. Like the book, I mean. And I say that despite going in with some pretty heavy reservations. I’ve long been a huge fan of Bendis, cemented when he sent me two signed original pages from A.K.A. Goldfish along with an apology for ranting against my William H. Macy distaste in a letters page. And as much as I’ve enjoyed the vast majority of what he has brought to Marvel over the decades, his signature David Mamet meets Merv Griffin blend of stylistic grit and snappy banter always works so much better with street-level superheroics than it does with galaxy-spanning epics. Even his best arcs on team books were more cloak & dagger (spy-shit, not the characters) than cosmic drama.

In this new series, however, Bendis is targeting the dead-center of DC’s extraterrestrial arena. He’s taking us back to Krypton, posing new questions about the final days of Superman’s homeworld, and introducing a host of new characters. Among these new faces is Rogol Zaar, an interstellar maniac on the Doomsday end of the power spectrum who may or may not have had something to do with the fabled planet’s demise. But there’s plenty of modern-day Clark Kent drama layered in as well; not a post-Crisis world, but post-Lois. The characterization elements that portray a distracted and preoccupied Superman are subtle and endearing.

The pacing and plot, moreover, rife with simmering intrigue, is classic Bendis. And, despite a generalized deluge of narration and dialogue in many of the DC titles, Bendis uncharacteristically (but refreshingly) reins it in when appropriate, letting the art breathe and more fully collaborate in the storytelling. Which is wonderful, since he’s working with an all-star lineup of artists on this series, essential for maintaining a weekly schedule. This first issue, with art by Ivan Reis, is an outstanding table-setter.