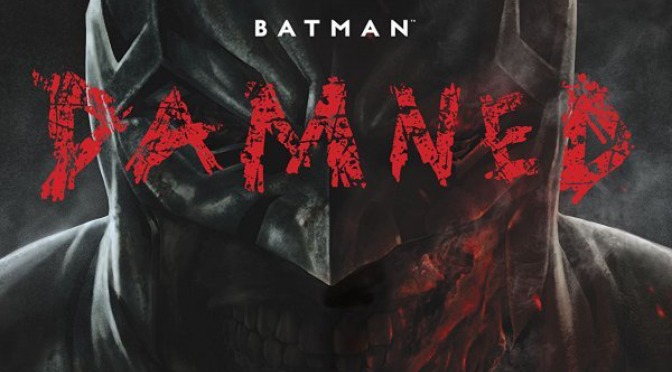 I, probably like many casual comic book fans, was compelled to read Batman: Damned #1 for one reason: the Bat-dong. News surrounding Batman’s bare, ink-rendered member kept my group chat buzzing through the day of its release. Sadly, when I finally got around to reading the story, the X-rated panel was censored, and I had to rely on Google images to fill in the blanks. However, what’s really sad is how this dong-reveal, and the following redaction of said dong by DC comics, seems like a publishing gimmick to boost sales (albeit a more fun one than just restarting a series and slapping a “#1” on the cover). What is actually awesome about this book is: it’s good. It’s great to look at and fun to read, and adds up to more than one money shot panel.

One of the reasons Batman can continue to have imaginative and entertaining adventures is partly due to the timeless quality of the character, but also because of creative teams that tell interesting stories. Brian Azzarello and Lee Bermejo expand the niche Gotham mythos they started a decade ago with their Joker graphic novel. Notable for delving into the Joker’s psyche, like The Killing Joke before it, Azzarello and Bermejo’s Joker ends in a cliffhanger: the fate of Batman, Joker, and Joker’s chauffeur is left unresolved. In Damned, the authors pick up where they left off, only this time it’s Bruce’s psyche that they explore. Comparisons to Alan Moore and even Gaiman’s Sandman work are easy to make, and it’s not just the presence of John Constantine and the supernatural.

Azzarello mostly speaks through Constantine in cryptic, short passages. The words float in unusual parts of the panel and are dwarfed by the visuals. The character obviously knows more than I do, but because I don’t speak the language of prophets, all I can do is turn the page and hope for answers. There aren’t a lot of those (duh, it’s part one), but there is beautiful, intense art. Bermejo’s characters look realistic, but sometimes border the grotesque. The art not only provides the action in the book, but sets a tone and tension that the writing supports more than carries. It’s the kind of comic book you’d expect to come out during fall when the sun sets faster and the nights get cold. 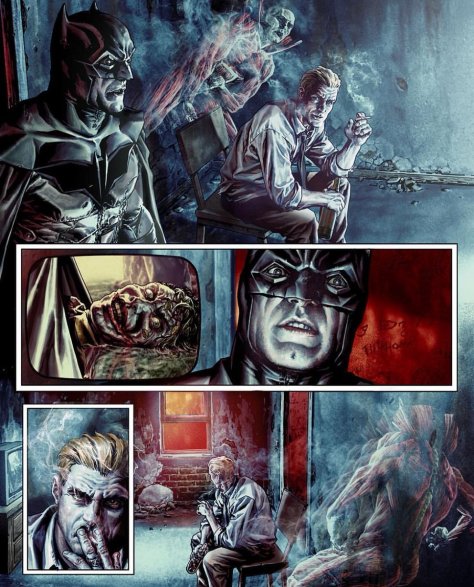 The theme of deception is applied throughout this first chapter. Any Batman fan knows that deception is a tool the Dark Knight has at his disposal, but it becomes a weapon against him in this story. The truth about Joker’s death, the motives of John Constantine, and even an extramarital affair by the unassailably good Thomas Wayne, plague Batman and propel him on a quest for answers. Questioning truth and the dark secrets of powerful men are ideas that strongly resonate today, making this book not only a cool piece of DC lore, but an interesting meditation on our real world.

As a reader, I am always happily surprised when something so familiar throws me for a loop. I may have picked up this book for the wrong reason, but I’ll pick up the next chapters in the hopes of following a good mystery. One that’s not “why am I looking at Batman’s dong?”