This month Lion Forge is releasing the first printed edition of Ezra Claytan Daniels’s Upgrade Soul, a startling work of science fiction that had been originally developed as an semi-immersive digital experience. The work, begun in 2012, was built using Eric Loyer’s Opertoon engine, resulting in a digital comic with many of the transition features that we’ve seen in comics like Marvel’s Infinite comics line, but with the addition of an original musical score coordinated with the viewer’s interaction. Sounds cool. Unfortunately, I speak not from experience, but solely from what I’ve gleaned online; the digital app version of Upgrade Soul is no longer compatible with the current iOS and has since been unavailable for download.

The very fact, however, that Daniels’s work had been originally developed and published in this manner made me a little leery regarding the print version, despite the accolades (which include a 2017 Dwayne McDuffie Award For Diversity In Comics). The comics medium, when fully realized, considers the delivery method and presentation as vital partners to story and art. If this was intended to be consumed a certain way… would a different package offer a sub-optimal view of the cartoonist’s vision? I’ve seen what happens when the aforementioned Infinite Comics (which, granted, aren’t any good to begin with) or even certain webcomics get translated to the page: awkward extra panels, skewed layouts, and just a general lack of continuity. They often feel like something not meant to see a printed page.

Luckily I ignored those reservations and dove in. Daniels’s book is one of the best comics I’ve read in 2018, and one of the best works of science-fiction — in any medium — that I’ve experienced in years.

The story centers on an elderly couple, Dr. Molly Nonnar and her husband Hank, who fund a questionable scientific experiment designed to reverse decades of senescence, rejuvenating the mind and body into a best version of itself. They invest considerable wealth in the program on the condition that the two of them would become the first human test subjects. Complications arise when it is revealed that this process of biological cleansing necessitates a clone to house the jumpstarted genetics. And the clones themselves are not at all what was anticipated…

There are several elements that elevate this story above a modernized retread of Flowers for Algernon, or any other cautionary tale about the perils of playing god for that matter. The first is in the brilliant characterization of the story’s key players, from the focal couple to their extended family and the entire team of scientists and assistants. 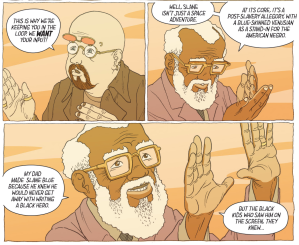 Through a series of flashback vignettes, the stories of Hank and Molly take shape: she is a scientist herself, and one of some note. He had been a best-selling author of a series of sci-fi adventures, carrying on a family legacy by writing new novels based on a character created by his father. Their passion for scientific advancement is evident, as is the fact that they are wonderfully, painfully, human. The love affair between this retired couple beats at the heart of the entire narrative, filling the story with a naked fragility that is juxtaposed beautifully against the steely certitude of the researchers and their futuristic vision. The couple is not blameless in the crisis that unfolds. They are, simply, as you or I might be, enraptured by possibility, victims solely of their own curiosity and personal desires.

Daniels takes this wonderful cast of characters and runs them through a taut, suspenseful plot worthy of Asimov or Dick. The revelations, both forward and backward in time, showcase an ingenious plot construction that reminds me of Brian K. Vaughan’s books. It’s a real page-turner. Or… image… swiper I guess? However you read this — on an app or in a squarebound trade — it’s tough to put down. 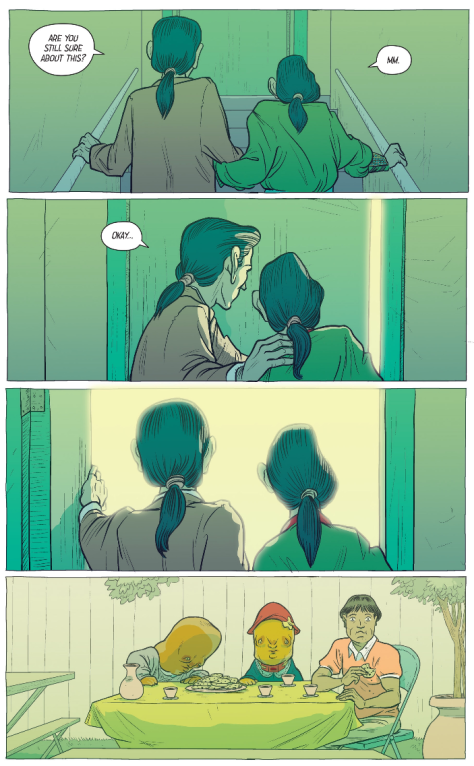 Finally, Daniels is a complete storyteller, and his artistic confidence belies any kind of inexperience in the comic book medium. Layouts are wonderfully composed with nary a hint of adaptation from the original digital presentation (there are a few panels with second-to-second transitions that remind the reader that these were once meant to shockingly fade into one another). The color palette complements the various moods, from heartwarming to insidious. And his linework, loose yet restrained, produces wonderful character distinction and emotion. There’s a sequence in which the head researcher, Dr. Kallose, brings forward his sheltered sister Lina to meet the Nonnar clones, closing in one of the most affecting comic book panels I’ve ever seen.