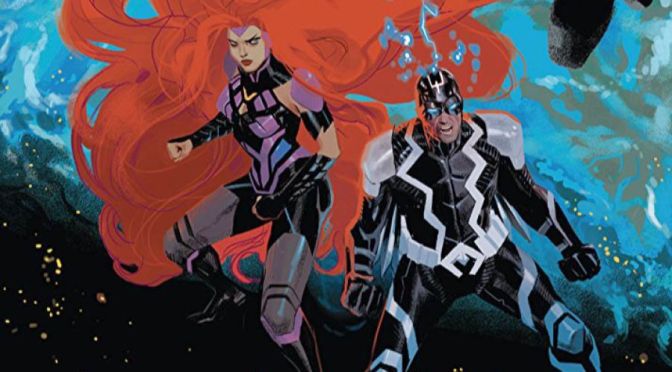 No one wants me to complain any further about Marvel’s abortive attempts at elevating the Inhumans. I’m even sick of hearing my own rants on the topic. Things were looking up in the aftermath of Jason Aaron’s Infinity, but from the moment Inhumanity was introduced as a focal concept on ABC’s Agents of S.H.I.E.L.D., we’ve endured a mediocre Inhuman title, two sputtering All-New All-Different launches, and a positively atrocious television mini-series. The latest flame-out came as Al Ewing’s once-promising Royals series drew to a close with issue #12. This week, in order to provide some semblance of closure to the Inhumans’ intergalactic quest for answers to new questions about their origins, Ewing is joined by Kevin Libranda and Mike del Mundo on the one-shot Inhumans: Judgment Day.

Despite knowing what this comic was going to be — a semi-rushed capper to a storyline that likely had been envisioned for a much deeper run — there are three distinct takeaways worth appreciating. The first is the fantastic art of Mike del Mundo. Even though he shares duties with Royals fill-in artist Libranda, any opportunity to see interior work by del Mundo is worth the price of admission. And in this issue we get not one, but two multi-page spreads.

END_OF_DOCUMENT_TOKEN_TO_BE_REPLACED

Saladin Ahmed and Christian Ward’s Black Bolt series continues to be one of the best comic books Marvel has published in years. Which is pretty important, I think, considering ABC’s Inhumans was one of the worst things to ever air on television. And recent efforts to push the New Attilan contingent to the forefront of the comic book universe have stumbled mightily. Poor Jack Kirby. At least Taika Watiti’s Ragnarok pays appropriate homage to the King’s style and legacy. But the Inhumans were always one of my favorite concepts, both in character origin and design, and it has bothered me to see so much of that colorful cosmically charged energy go to waste, whether in half-ass crossovers or gawdawful televised mini-series. Ask anyone only casually familiar with the Marvel universe for an opinion on the Inhumans, and you’re likely to garner a reaction ranging from dismissal to outright mockery.

And if damaged popular opinion prevents even one person from checking out this brilliant series, that’s a real shame. Saladin Ahmed has turned a character who, for decades, had been an emotionless and austere pillar of Inhumanity into something, well, human. A self-examination that begins in classically Golden Age-style narration gives way to actual dialogue, after Black Bolt is depowered by the Jailer. He explores what it means to be a king and, more importantly, what it means to be part of a family, in the most unlikely of places. All the while, artist Christian Ward portrays the King of the Inhumans as someone suddenly vulnerable, soft-shouldered and somewhat undersized, but with a strength and dynamism that comes not from his mountain-shattering vocal cords, but from his character.

In this first issue under the Marvel Legacy banner, Black Bolt returns home. He has a promise to keep, and intends to visit the Absorbing Man’s widow. My first question, before picking up this book, was whether or not Ward’s art was going to be as intense and exciting here on planet earth as it was in the Jailer’s trippy space prison. That was answered quickly enough. Even without the rest of the royal family to play around with, seeing Ward take on the other Inhumans in New Attilan and the capes n’ tights world of NYC, has moved this title even higher up my monthly must-read list. 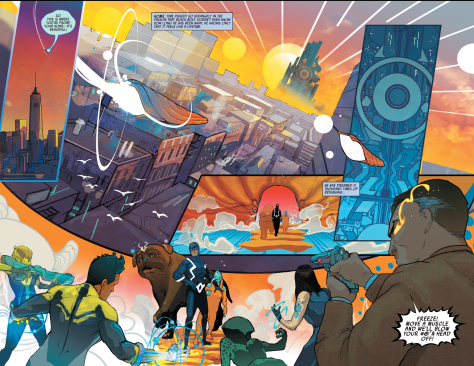 END_OF_DOCUMENT_TOKEN_TO_BE_REPLACED

I initially reacted with a little disbelief upon hearing that this Black Bolt series was the Inhuman king’s first solo series. Brought to life by Jack Kirby and Stan Lee in the pages of Fantastic Four in 1965, Blackagar Boltagon and his compatriots have been central figures in a multitude of mighty Marvel storylines for decades. But he’s never fronted his own title? Hell, even his damn dog got to star in Lockjaw and The Pet Avengers back in ’09. Then I quickly realized, well… a protagonist who can level a building with a whisper probably won’t factor well in a dialogue-rich comic book. Or, a comic with any dialogue, really. He’s always relied upon Medusa or another member of the royal family to translate a series of stern gazes and austere gestures. And a book featuring even one of those folks wouldn’t really be a Black Bolt solo title anymore, would it?

The question regarding how much dialogue this series would contain, or how it would be handled, was just one of the mysteries tucked inside that gorgeously ominous cover to issue #1. If this was meant to fold into the current ResurrXion continuity, how might a solo book work? Wasn’t Black Bolt rocketing through the galaxy with his family, searching for ancient Inhuman secrets? Or was this going to be a flashback series a la Gamora? With the upcoming debut of ABC’s Inhumans series, was this just a substance-less ploy to generate rack awareness and promote the television property? And what about this creative team? Saladin Ahmed has good sci-fi and fantasy credentials, but this was going to be the novelist’s first comic. That could go one of two ways (see Ta-Nehisi Coates versus Geoffrey Thorne). Did Christian Ward, with a résumé of beautiful covers and amazing fill-in work on Al Ewing’s Ultimates under his belt, have the chops to fully illustrate a monthly book? And, maybe most importantly, solo series or not, were we going to see Lockjaw?

END_OF_DOCUMENT_TOKEN_TO_BE_REPLACED

Despite receiving considerably less fanfare than any of their regularly scheduled publishing initiatives, like All-New All-Different or the forthcoming Legacy, Marvel’s recent refresh on their mutant and Inhuman books has not only shown some sorely needed love to these teams and characters, but produced some wholly entertaining titles as well. The first few months of ResurrXion, rising out of the ashes of Death of X and Inhumans vs. X-Men, has given us thirteen new series or storyline kickoffs.

It’s a good time to shine a spotlight on these two venerable Marvel properties. Fox’s X-movies are still popular as hell, with current buzz building for the Deadpool sequel. FX’s Legion series was fantastic, and their network mutant show, The Gifted, looks promising. Marvel Studios has been forcing Inhumanity down our throats for a few years now, but with the highly anticipated debut of ABC’s Inhumans show this fall, the royal family finally takes center stage. Nothing against Daisy Johnson or that creepy porcupine monster that Ruth Negga turned into, but we want to see Black Bolt and Lockjaw! END_OF_DOCUMENT_TOKEN_TO_BE_REPLACED