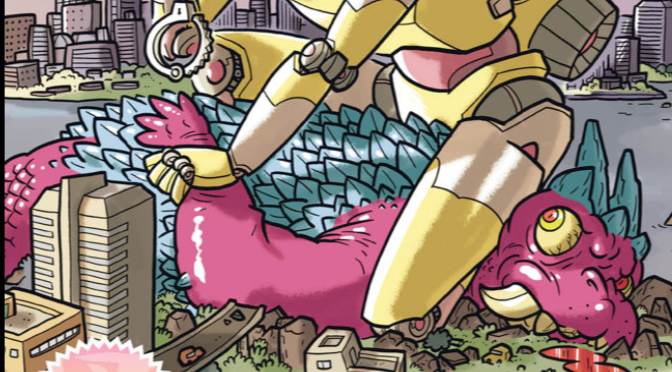 This week, Zander Cannon returns with the latest volume of his acclaimed Kaijumax series. On the surface, a series about giant Japanese monsters imprisoned on a maximum-security island, policed by a staff of Ultramen and women sounds like rousing comedic fare. How many chuckles can Cannon elicit with a seemingly ever-expanding lexicon of kaiju-fied prison slang? Answer: many. (“No! Marianas no! I say smooth white balls to that.” Freaking love that.) But this book, like all of Cannon’s work, delves into so much more and, as he explains himself in this issue’s afterword, there is no other medium that allows for truly bizarre explorations of serious subject matter.

“Being bizarre and audacious right from the start gets readers off-balance and gets them to examine a story and forces them to admit they really don’t know how this is all going to play out.”

If you haven’t already done so, do yourself a favor and pick up the Kaijumax: Season One trade. Then, meet back here for the Season Two opener. You’ve now experienced the brilliant audacity of monsters painfully addicted to uranium, and the crooked prison guards who deal in suffering. You’ve wrinkled your brow at brutal assaults and illicit, improbable affairs. And you realize that, despite maybe loving giant mechamonsters and tokusatsu antics as a kid, Kaijumax isn’t for children. And, as a result, you love it all the more. Because now you expect something more.

END_OF_DOCUMENT_TOKEN_TO_BE_REPLACED

To me, the Vision is the character I  would get stuck playing as in the Captain America and the Avengers arcade game even though I wanted to be Hawkeye (I never forgave you Jeff; you just wanted to spite me). I always kind of held that against him and never found myself interested in him. His villain “father” Ultron was always the most interesting aspect of the character.   Hell, I didn’t even think he was interesting in Avengers: Age of Ultron. Other than that, he was just that robot that was famous for crying. Those low expectations proved to be a blessing for Vision.

The story is simple enough: the Vision has decided to create a family for himself and move them out to the suburbs of Virginia right outside Washington D.C., while he acts as the Avengers liaison to the White House. His new wife Virginia struggles with bringing her family together while brother/sister twins Vin and Viv deal with high school. On paper, that sounds like a relatively bland and tired story of a hero trying to manage the stress of home life with the duties of being a superhero. Thankfully, Vision is not that story. It is a horror/morality tale about isolation while struggling with one’s own depression and anxiety. END_OF_DOCUMENT_TOKEN_TO_BE_REPLACED

We’re still posting our rankings for the first six months of Marvel’s relaunch, but the hits keep on coming from the House of Ideas, and I don’t doubt that had we waited until All New All Different Marvel – Week 27 to tabulate results, Black Panther by Ta-Nehisi Coates and Brian Stelfreeze would have made the Top 10.

In an interview with NPR, National Book Award recipient Coates talks about how working with Marvel, despite his first experience writing comics, nonetheless makes him “feel back at home.” And home, in this case, is taking a character that debuted fifty years ago in the pages of The Fantastic Four, and making him powerfully relevant in the present.

Given Black Panther’s impending appearance in Marvel Films’ Captain America: Civil War, and a planned solo movie, it would have been easy for the company to simply inundate the comic shop with team book appearances; new series, both limited and ongoing; and half-hearted attempts at putting his face on as many covers as possible. You know, like Deadpool.

Granted, T’challa is part of Ewing & Rocafort’s The Ultimates, but this Coates and Stelfreeze series is the definitive Panther book, and by no means  a requisite media tie-in. And despite a fair amount of back-story to churn through, including the current state of Wakanda, the fictional African kingdom ruled by the T’challa, this new Black Panther delivers on Marvel’s promise to offer an excellent jumping-on point for new readers. END_OF_DOCUMENT_TOKEN_TO_BE_REPLACED 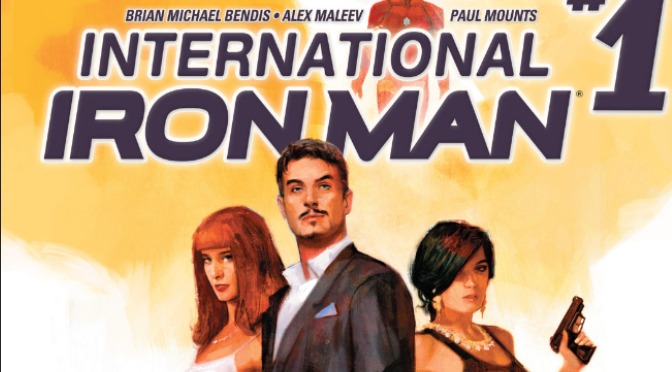 We’ve been at this for almost half a year, True Believers. When do we stop calling this the All New All Different Marvel universe? After all, the “Marvel NOW!” and “All New” half-ass attempts at relaunching titles and building readership both started petering out around this point. Can we just call this the Marvel Universe now and move on with it?

Or maybe just pump the brakes a minute, friends. Because it looks like we need one more Iron Man series. And one more series written by Brian Michael Bendis. And one more promise to “discover new things about the Marvel Universe” we never knew existed! And, what the hell. Alex Maleev and Paul Mounts? Count me in.

This week’s premiere, International Iron Man, puts Tony Stark on a quest to discover who his real parents are, and it begins with a flashback to his Cambridge days; a wealthy, beautiful woman; and Hydra goons gunning folks down in the street. Here we go.

Also new this week: Spider-Woman finally has her baaybee! The latest Apocalypse storyline (might there be a movie coming?) begins in the pages of Lemire’s Extraordinary! Power Man and Iron Fist bust some fiddle-faddling heads!

It hasn’t come as a surprise to any Marvel readers, new or old, that much of this All New All Different relaunch has been informed and influenced by the greater Marvel media incarnations of its properties. Contest of Champions supports their mobile video game. The latest volume of Avengers features a run-in with the Chitauri. Every other comic has Deadpool. So if you’re at all curious as to why a minor B-list character like Mockingbird is getting her first solo series, then you clearly haven’t been watching ABC’s Agents of S.H.I.E.L.D.

In the 80’s, Bobbi Morse might have been Clint Barton’s better half, but she was significantly less well known. And let’s face it – hardly anyone even knew who Hawkeye was. Worse yet, she was a founding member of the West Coast Avengers. So she was a supporting cast member for a minor league offshoot of the super-team that already played second fiddle to the X-Men. But in 2016, a live-action Mockingbird is a S.H.I.E.L.D. agent on the hit network series, and she’s portrayed by the made-for-superhero-flicks Adrianne Palicki. Hell yes she’s getting a comic.

This new Mockingbird is written by bestselling novelist Chelsea Cain, with art by newcomer Kate Niemczyk and colorist Rachelle Rosenberg. Kudos to Marvel for publishing another book by a female creative team, and congratulations to Cain, Niemczyk, and all involved for kicking off this series with one of the best superhero psychoanalysis sessions since Peter David’s X-Factor. Cain, in the afterword, admits that this first issue doesn’t make “any sense at all.” But, after multiple visits to the S.H.I.E.L.D. medical clinic, and a heavy sprinkling of puzzle pieces designed to set up an intriguing first arc, I have to agree with another Cain sentiment: many things that don’t make any sense at all are still awesome.

This is arguably the most exciting week yet in Marvel’s All-New, All-Different era. Four continuing titles serve to illuminate more of the post-Secret Wars world. Seven premieres run the gamut from some of the worst books Marvel has produced in years (willing to bet Drax gets cancelled before we’re even able to round-table our rankings) and some of the most refreshing and entertaining takes on both classic and modern superheroes (Hercules and Vision). We also get a funnybook that is genuinely funny (Howard the Duck) and the first real look at how The X-Men figure into Marvel’s new world order.

This brings the running total of new titles in Marvel’s relaunch up to 23, of a rumored 60+ series.