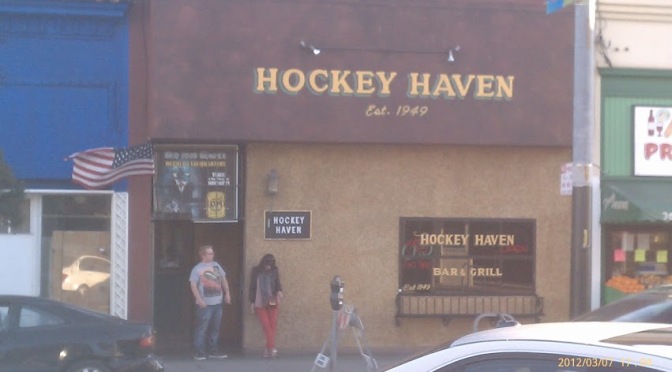 I have always blindly defended the Richmond district of San Francisco because that’s where I grew up. I now re-focus that devotion to the Outer Richmond and Outer Sunset (the Outer-Outers) in particular because that’s my new hood. So for all you transplants and hilltopping locals, here are the spots to eat, drink, and be merry…

Where the sidewalk ends

In many cases my reviews and opinions are based on a small sample of visits and the chance encounters that occur, but are presented as absolute and consistent truths. There are far too many places in the city to experience and I’d rather hit ‘em all a few times rather than hash out a documentary on the true heart and soul of a few. Besides, extrapolation always works. It’s proven accurate, like, 2 times for me already. Every single time I see Monta score 8 or 10 points in the first few minutes of a game, the phrase “at this rate” pops into my head  and I envision him holding up a little piece of paper with the number 102 crudely drawn on it. That’s how I think.

With that being said, Hockey Haven is a piece of shit bar.

“This bar’s for locals,” the bartender suggesta-threatened. My buddy Serge countered with “we are the new locals. Whoooooo.” A quick and funny comeback delivered with such enthusiastic joy that it perked me right up, but it failed to warm the limp pickled heart of the proprietor. No laugh, no smile, nothing. If she wasn’t so beaten down by life, she may have made a real effort to ask us to leave. But we lingered a little while longer until the last flicker of a potentially fun night disappeared. The briefly heated discussion caused the flanking locals to raise their extremely slumped postures to some sadly supported sags. This was the closest bar to my new house. This was the first week of my arrival. Oh well. There’s another bar basically equidistant in the other direction. Tee Off. Guess I’ll have to settle for Tee Off.

Dive bars are charming, but they need to have the bare essentials: cheap drinks, bar games, and funny bartenders. If all you have are cheap drinks – as is the case with Hockey Haven – you end up catering to a depressing bunch of drunks. I’ve never been the kind to drown my sorrows in a bottle, so I don’t understand the draw of a place like this. All it seems to do is sap the energy from the patrons.

Also, not a single piece of Sharks memorabilia in the entire place. Hockey Haven? Psshhh. Word on the street is that they have a helluva steak feed on Mondays. I’ve heard it from a number of sources and it’s more likely than not the first thing they mention when this bar is discussed. But that only happens during football season. So what? Like 17 days of the year this place is worth going to? Maybe I’ll try it out next time the Niners are on MNF. Maybe the vibe has taken an upward shift in the last 3 years. Maybe aliens visited Earth 10,000 years ago and we’re all genetic hybrids of pigs and fish. I’m not ruling anything out.

And so the very first Outer-Outer rating gets applied to Hockey Haven. Judged on a scale of 1 to 5 raccoons because those little buggers are everywhere out here. You can hear them scrapping in the surrounding backyards at night, see them scurrying up trees, or oftentimes just boldly trotting across the street at fairly early hours of the evening. I can never seem to get a good snapshot of them, but you can see the cool glow from a couple pairs of eyes. This was a pack of four bold roamers who were checking out my front yard and stairway. At like 7pm.

One thought on “First Review of the Outer-Outers”