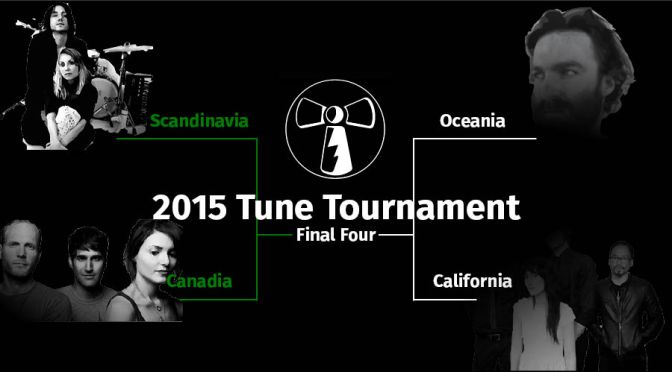 MH has already commented on his busted bracket. Mine doesn’t look too much better, but I did have Chet Faker advancing to the Final Four ahead of Hiatus Kaiyote. My prediction in California was bounced in the second round. That doesn’t bother me in the slightest, of course, as I’m very excited to see locals The Y Axes representing our home state.

The left side of the bracket looks nothing like my pre-tournament prognostication, however…

As much as I love this new Moonbabies record (hell, I seeded their song second in Scandinavia), I did not expect the sheer dominance “Pink Heart Mother” has exhibited over the course of this tournament. Their latest victory was a 72% blowout over Jens “Just Happy To Be Here” Lekman. And what I really didn’t expect, over in our northern neighbor region, was to see The Rural Alberta Advantage sitting atop the heap as Canadian champs. Given the majority of Idle Timers’ predilection for keyboards and drum machines, I really thought that last round was going to Caribou.

Happy to be surprised. And happy to see one of these four song titles tattooed on the Holy Bee’s butt.