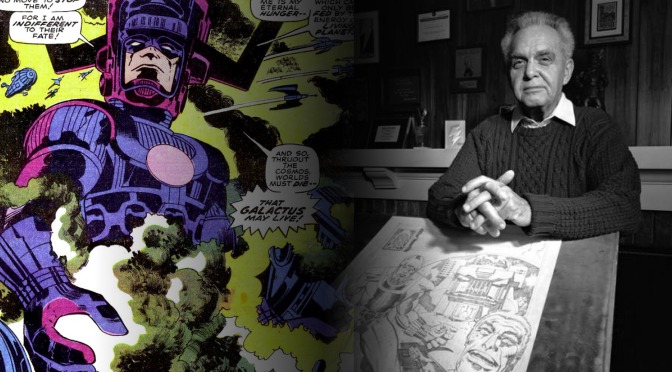 This Friday will mark the 98th birthday of Jack “The King” Kirby, legendary artist whose creative genius helped give life to many of the most recognizable characters in the Marvel universe, and whose iconic style also served to usher in an entirely new era of superheroic imagination.

Kirby passed away in 1994, but his legacy endures. That legacy extends far beyond the close to four billion dollars earned by Hollywood films featuring his characters. Beginning in the 90’s, and inspired by the Kirby estate’s efforts to regain rights and credit for Jack’s work, a movement for creators’ rights took shape that changed the landscape of the comic book industry.

From the Image revolution through the Hollywood success of creations such as Mignola’s Hellboy and Millar and Romita’s Kick-Ass, today’s creators owe much to the activism that began when Kirby and his supporters started championing the rights of comic book artists and writers.

And the support continues. Jillian Kirby, Jack’s granddaughter, has spearheaded the Kirby 4 Heroes campaign to honor her grandfather. Her campaign helps garner support and financial donations for The Hero Initiative which, since its inception in 2000, has been raising money to help comic book creators in need.

The Hero Initiative creates a financial safety net for yesterdays’ creators who may need emergency medical aid, financial support for essentials of life, and an avenue back into paying work. It’s a chance for all of us to give back something to the people who have given us so much enjoyment.

On Jack’s birthday this Friday, comic book shops around the country will be raising funds for Kirby 4 Heroes by donating a percentage of sales, auctioning original artwork, or collecting funds in a donation jar. It’s one of the reasons I’m waiting until tomorrow to pick up this week’s books from Mission: Comics & Art. And creators the world over are contributing via the #WakeUpAndDraw movement, providing original works for these fundraisers.

Also, starting tomorrow, four Idle Timers will be collectively sharing our favorite Kirby creations. From his pre-Marvel days through his arrival at DC in the 1970’s, Kirby’s impact on comics and popular culture in general has been monumental. Here’s a little glimpse at what some of these characters have meant to us.