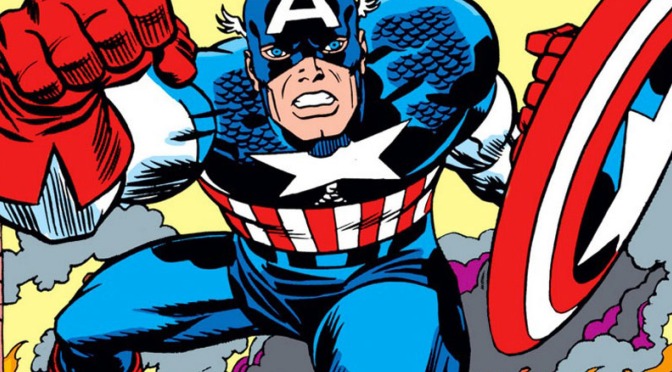 Captain America Comics #1 burst onto newsstands in 1941 with that now-famous flying right hook to the jaw of Adolf Hitler. The book and cover are largely credited to Joe Simon, but his young partner Jack Kirby, 23 at the time, became an increasingly integral part of the design and development of one of popular culture’s most enduring characters.

When Kirby came back to Marvel in the early 60’s to partner with Stan Lee on the birth of the Marvel Universe, he also helped bring back a character who many thought might have just remained a campy footnote in the propaganda-laden pulp trade of the 1940’s. In an even more memorable issue with a singularly milestone cover, Captain America became well and truly Jack Kirby’s superhero. 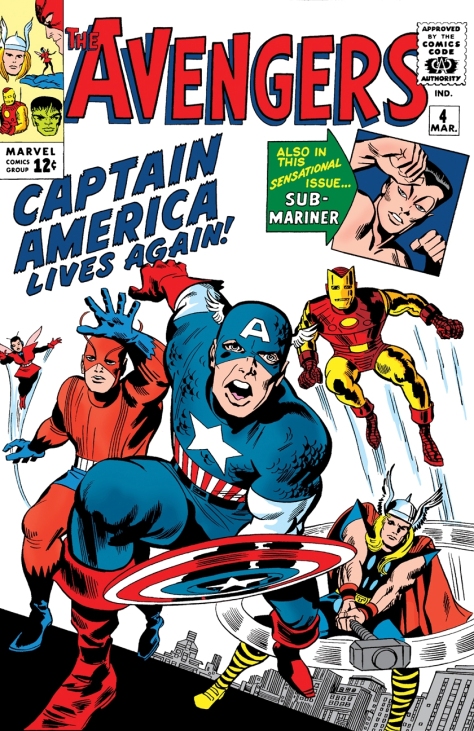 Any comic fan worth his bag-and-board knows Avengers 4 the way he knows Amazing Fantasy 15 or Detective Comics 27. As a childhood fan of the Avengers, I must’ve read reprints or Marvel Saga re-mixes of this issue dozens of times. Even before I knew it was important, I felt its importance. That image of a superhero in tattered uniform, comatose on an exam table. The “Lives Again” title that somehow transcended typical four-color hyperbole. And the acknowledgement that this is where things really began for my favorite comic book super-team.

Interestingly enough, however, it took me a very long time to fully appreciate either this character or Jack Kirby’s contribution to his make-up. Even though Avengers 189 was the issue I vividly remember hooking me as a wide-eyed kid, the comic book collector in me didn’t develop until the mid-80’s during a time when The West Coast Avengers was headed up by my two favorite super-heroes, Hawkeye and The Vision, while the “East Coast” team was an interesting mix of rarely seen again cosmic crime-fighters (like the Monica Rambeau version of Captain Marvel and Starfox) sans Captain America. Truth be told, I didn’t think too highly of the character at all during that period. I was turned off a bit, I think, by what David Cross refers to as “that flag-waving cheerleading rah-rah bullshit.” But I was still an Avengers guy: I honored the presidency, if not the president, so to speak. 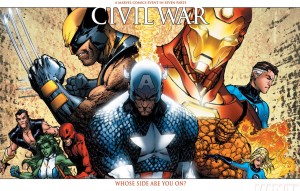 Fast forward decades (and I’m still reading comic books): Marvel’s Civil War. My brother had grown up a big-time Iron Man fan. It made things fairly convenient, being able to read those issues without buying them, the same way I would borrow MXD’s Fantastic Fours or DO’s Uncanny X-Mens. And my brother and I had always been reasonably competitive. Whose Side Are You On? Well, looks like I’m drinking the flag-waving Kool-Aid, bro, if for no other reason than to antagonize you and the fascist Tony Stark Registration Act manifesto that has you well and truly brainwashed.

I mean, Cap was so right.

In the aftermath of that comics event (the last really good comics book “event” in my humble opinion), I became very impressed with Ed Brubaker and that seminal James Bond-style run on Captain America that bookended the Millar & McNiven game-changer. From there I began my re-discovery of the character, which led me all the way back to Jack Kirby and one of the single most interesting runs in Marvel history.

Fresh off his incredible foray into Fourth World for DC, Jack Kirby was welcomed back to the House of Ideas and given full creative control – scripts, pencils, and edits – over Captain America beginning with issue 193. I’m glad I read it as an adult, and not a continuity-obsessed teen who thought Frank Miller’s Daredevil dialogue was worthy of a Pulitzer. It’s fucking weird. And so great. This is the era that gave us Arnim Zola, the Madbomb, and the Kill-Derby skateboard combat. It was the sci-fi zaniness of his work at DC breathed into the form and breadth of his seminal work at Marvel. And it was proof, to me anyway, that so many of my favorite ideas that spun forth from that early Marvel era – from Kang the Conqueror to The Inhumans to Galactus and the Silver Surfer – bear the unmistakable stamp of the King.