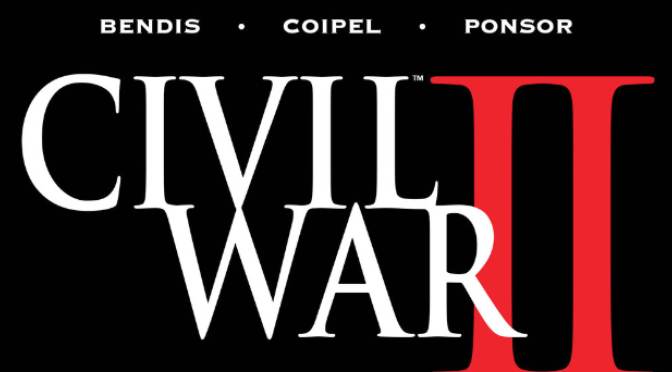 Okay, so it’s technically issue “#0” of Civil War II, but this clearly is where things get started. Brian Michael Bendis and Olivier Coipel, the team behind the outstanding event mini-series House of M and the far less memorable Siege, return with a sequel, of sorts, to Mark Millar and Steve McNiven’s seminal Civil War. Just in time to cash in on all the attention garnered by the new Captain America movie, naturally. We know how Marvel operates.

We also know that it’s a rare feat to come up with some truly original storylines in the capes-n-tights universes, so maybe we can forgive this creative team for, once again, rehashing old plot devices and trigger points. Or another way to look at it, I suppose, is that it’s Week 33 of All New All Different Marvel, which seems far too soon to give up on being either new or different. Whatever the case, here we go again. A tragic explosion and massive loss of life (see the aforementioned Civil War and Siege) results in a major moral quandary and divisive dilemma for the superpowered set.

What is different, and in keeping with a major development in this Marvel relaunch, is the role of the Inhuman population and that mysterious floating cloud of Terrigen mist. Deadly to mutants, but capable of unlocking latent alien powers in a certain percentage of humanity, the mist, and the awesome potential that it represents, is at the center of both the inciting event and the story as a whole.

Also different are a few of the central players. Nice to see Carol Danvers, the new Captain Marvel, taking center stage for this throwdown. Marvel deserves a lot of credit for showcasing not just more female characters during this relaunch, but giving voice to so many female creative teams as well (not that either Bendis or Coipel represent the fairer sex, but check out what Carol is doing in A-Force or Captain Marvel, or how the heir to her Ms. Marvel moniker is cleaning up Jersey). Here’s hoping this prominence is more than just a table-setting for the next phase in the Marvel Cinematic Universe.

Don’t get me wrong: if you like superhero event books, or have any interest in the Marvel U, pick up this book. I’ve been purposefully vague with the synopsis here because, despite a certain lack of creativity at the onset, this still figures to be one of those top-of-the-stack Wednesday events that ignite our four-color fervor this summer. You’ll need to experience the surprises yourself. The new Captain America is arguably the best superhero movie ever made, and it wasn’t wholly original. Does this new Bendis & Coipel joint have best-ever mojo between the panels? I’m not betting against them. 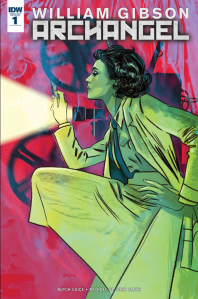 Other Highlights
William Gibson, the legendary progenitor of cyberpunk and heir to the Philip K. Dick legacy of paranoiac, prescient science-fiction, makes his comic book debut with IDW’s Archangel. Working from a concept conceived with writer Michael St. John Smith, and partnered with veteran artists Butch Guice and Tom Palmer, Gibson starts seeding the clouds of post-War occupied Germany with sinister time-traveling skullduggery. Remember when that dumbass Eckels wanders off the path, crushes a butterfly, and thusly unwittingly alters the present political landscape in Bradbury’s classic “A Sound of Thunder”? Now, imagine folks doing that on purpose.

DC Highlights
The entire reason I am into cartoons and pulpy stories rests solely on Hanna-Barbera. While I did watch all the Looney Toons and Disney I could, nothing sold me like the the HB. Hell, the whole reason Cartoon Network was created was to broadcast the stuff. So I owe quite a bit of myself to these cartoons.

Needless to say, I was beyond excited to hear about Future Quest from the team of Jeff Parker, Evan “Doc” Shaner, Steve Rude, and Jordie Bellaire . They showed me how well they handle this stuff from their excellent Flash Gordon run. The possibilities of this book made me chomp at the bit. All of my favorites in one book! Jonny! Birdman! Space Ghost! Walking Eye!

The book does not disappoint at all. Instead of being a cheap ploy at nostalgia, Parker and company deliver a great story and rationalization for how all these characters will exist in the same world. Dr. Z and the good Dr. Quest are in a Cold War-like race to collect pieces coming from vortexes, seemingly coming from another galaxy or time. With all these building blocks set so well, it makes all the reveals seem that much sweeter.

Seeing Steve Rude draw Birdman flying made me giddy. Shaner’s art makes the perfect pulp fit and Jordie Bellaire ties everything together with her beautiful colors. I cannot wait for more. – MeanOldPig