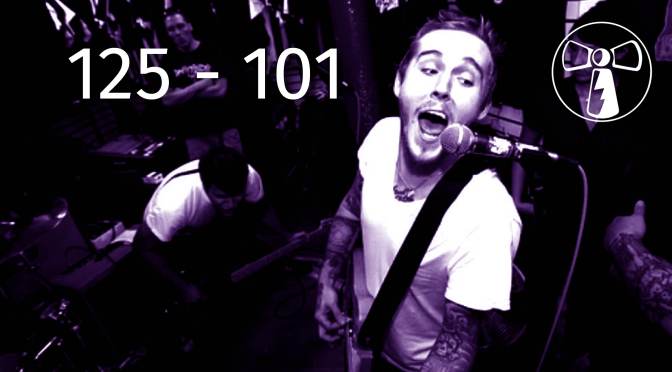 The second mix in the series is a geographic tour de force, opening in symphonic Castles and ending up on the fuzzy Beach. Tour the Mediterranean with stops in Mykonos and Italy, and be charmed by Swedish pop, Australian rock, and a Swedish troubadour by way of Australia. And somewhere in the middle is a four-piece from Jersey who, prior to their debut LP and the unavoidable Bon Jovi and Springsteen comparisons, likely hadn’t set foot farther than the north Atlantic seaboard.

125. “Untrust Us” – Crystal Castles
The psychotic side of Crystal Castles is dialed back to the perfect amount of weird with this grooving melodic synth line and incomprehensible robot singing. – Vico Vault

124. “Good Intentions Paving Company” – Joanna Newsom
Joanna Newsom has a wealth of voices hiding inside of her. Some songs allow her to let more out than usual, like this lead single off her masterful triple album Have One On Me. Newsom is an acquired taste, albeit one I acquired instantly, but “Good Intentions Paving Company” is a fine way to dip one’s toes into an artist with a hefty output and novella length lyric books accompanying each album. – IP

123. “Collapsing at Your Doorstep” – Air France
An exquisite arrangement of orchestral and vocal samples brought together by tropical drums and celebratory brass. – Vico Vault

122. “I Was Born” – Knock Knock
“There’s a certain kind of magic about a songwriter who writes about your hometown,” says JH. – djlazybear

121. “In This City” – Enon
I bought Enon’s High Society by accident. I had read a review for something else in CMJ and thought I was buying some art punk dance record (these were the days before smartphones or even reliable Internet searches), but instead came home with a hypnotizing melange of synthesized rhythms and spastic guitars. And in the middle of that album, her only vocals on the record, Toko Yasuda, her spritely English shyly floating over this bubbly tune. Enon clearly recognized a good thing. On the follow-up, Hocus-Pocus, in addition to her duties at the keyboard and on the bass guitar, Toko sings on all but one of the tracks. – MMDG

119. “Momma” – Kendrick Lamar
When I think of Kendrick Lamar, I think of a young NBA superstar. Think Anthony Davis, Karl Anthony-Towns; young men who have already have shown their talents will have mythical stories tied to them upon their retirement. At just 29 years of age, Kendrick has already released two proper full length albums some consider to already be shoe-ins for the Hip Hop Hall of Fame, whenever Ice Cube decides to make that happen. Please make that happen Ice Cube. There is still so much greatness he has left to achieve and I can’t wait to see what he does next. – hltchk

118. “Impossible” – Shout Out Louds
One of my first Swedish obsessions, and one of the stalwart champions of emotional, jangly pop music, the kind that made all those cute girls you liked in high school cry.  “Impossible” is their epic masterpiece, and even a grown-ass man like me can hear “your love is impossible” and get a little teary-eyed. – MMDG

117. “Mistaken for Strangers” – The National
Dude rock.  Dad rock.  Labels are dumb.  The National are the soundtrack for the Urban Quarter-Life existential crisis. – djlazybear

116. “Great Expectations” – Gaslight Anthem
The Gaslight Anthem have simplified and concentrated the tortured angst-rock of Roy Orbison’s “Running Scared” and the booming drama of the Darkness On The Edge Of Town-era E Street Band by forcing it through a spiky, post-punk filter. They don’t have a full orchestra or dozens of overdubbed Springsteens, just a couple of battered Telecasters. – holybeeofephesus

115. “Love the Way You Walk Away” – Blitzen Trapper
After stumbling (badly) with their 2010 album Destroyer of the Void (which had TWO songs with the word “lover” in the title), Blitzen Trapper righted their ship the very next year with American Goldwing by infusing their Portland-based, bearded folk-collective weirdness with a galvanizing jolt of swaggering Southern rock. Dickie Betts would be proud. – holybeeofephesus

114. “Sweet Disposition” – The Temper Trap
Remember that little stretch in the late aughts/early teens when every car commercial was making money for one indie band or another? Hell, Volkswagen even gave Suburban Kids an extra fifteen minutes of relevance. Well, this killer single from Australian outfit The Temper Trap trumped them all. After perking up ears in that Chrysler commercial, the song went on to sell Diet Coke and Rhapsody’s music service, as well as spending time in 500 Days of Summer and TV’s The Good Wife. Too bad they couldn’t have spent their money producing a better follow-up LP. – MMDG

113. “Romantic Rights” – Death from Above 1979
Angry dance-y break up punk. It fits a lot of niches and god damn does it work. – MeanOldPig

112. “Get Free” – Major Lazer feat. Amber of Dirty Projectors
Part Tarzan, part Talking Heads, part Dancehall, all emotive. Major Lazer hadn’t done a song like Get Free before, and they haven’t made one like it since, but this anomalous classic rolls along its five minute runtime in a fog of humid yodels and lively synth squelches. – IP

111. “King of All the World” – Old 97’s
Dallas’ Old 97’s kick over their usual alt-country traces, and flex their British Invasion muscles, resulting in what sounds like an amazing love-child of Doug Sahm and The Hollies. – holybeeofephesus

110. “Old Soul Song (for the New World Order)” – Bright Eyes
The first time I saw Conor Oberst he was a drunken mess, trading lyrics with tugs from a bottle of red wine on The Fillmore stage. A year later he had released all of his 21st-century anxieties on one album – appropriately titled Digital Ash – and channeled his melancholy into the gorgeous folk of I’m Wide Awake. This song has a Kerouac quality, a moving tribute to the beautiful sadness he sees in every twinkling, starry-eyed human being. – MMDG

109. “Green Knight” – Memory Tapes
This slow moving track offers movement after movement of melodic instrumentation under sincere and understated melodic vocals. The final section takes it to the top with a new spread of instruments that layer on the sounds. – Vico Vault

108. “Mykonos” – Fleet Foxes
FF would have been the perfect Prancing Pony house band.  Echoing their love of English folk music, their early songs are all about travelling, fellowship, and the love of singing with your people. – holybeeofephesus

107. “Thinkin Bout You” – Frank Ocean
Originally written for another artist (who released her “Thinking About Forever” subsequently), Ocean’s R&B heartbreaker was clearly too personal and too powerful not to record himself. Good thing, too, because the vocals and production on his version are unmatched.

106. “Postcards from Italy” – Beirut
Being all of 19 at the time, Zach Condon expertly wrote/arranged/produced a masterpiece out of the gate.  Forget all of that Gypsy/Baltic talk!  This is a great song with the greatest bridge of the last 20 years.  What were you doing when you were 19? – djlazybear

105. “Coma Girl” – Joe Strummer & The Mescaleros
We’ve lost too many musical icons already this year, but nothing has – or likely ever will – affect me like the passing of Joe Strummer. A few months before his death, I saw him at The Fillmore in what is still the best performance I’ve ever borne witness to. Streetcore was released posthumously, and this lead single still reminds me of that eternal punk, energized and drunk on life, now roaring through the dusty backroads of the afterlife, chasing tail and preaching solidarity. – MMDG

104. “I Know What Love Isn’t” – Jens Lekman
Following Kortedala, the Swedish singer-songwriter moved to Australia, fell in love, had his heart broken, and composed the best, saddest break-up album I’ve ever heard. It fucked me up. But then there’s this tune. And it’s a funny, touching reminder that while I, too, may have had a hard time knowing what love is, I sure as hell know what it isn’t. Things work out for me and Jens. – MMDG

103. “Surph” – Rustie
The melodic synthy lines with slow bumping bass and fast hats introduced with this track in 2011 were among the first of their kind, and ushered in an entire wave of similar sounds. – Vico Vault

101. “Norway” – Beach House
Beach House’s affinity for all things Galaxie 500 is what drew me to them early on (everyone who knows me is aware of my love of bummer jams); however, they doubled the bpm on this guy and produced their catchiest song (a foreshadowing of their pop masterpiece, Bloom). – djlazybear