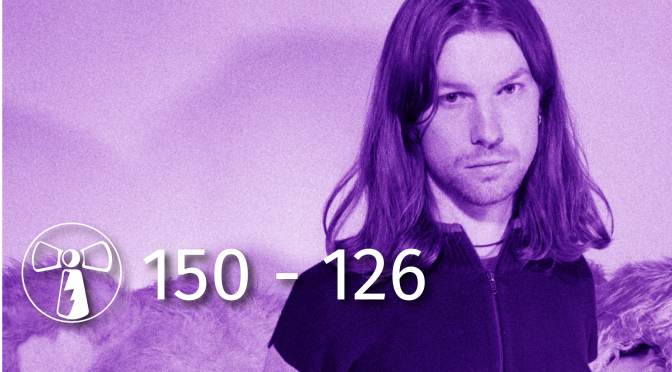 Rather than act as responsible DJs, tracklisting these 150 songs in an intelligible, well-conceived playlist, we’re letting the rankings dictate. Like an MTV Video Countdown or American Top 40, our favorite songs of the Idle Time era are being presented in inverse order, counting down to our number one.

We pride ourselves on the genre variety that we bring to a project like this, and it doesn’t surprise us when, as in most cases, the more uniquely personal favorites tend to filter down to the bottom of the list. The result, this first twenty-five-track mix, is probably the most schizophrenic of the lot, bouncing back and forth from one outlier to another. Richard David James, as The Tuss and Aphex Twin, makes two appearances in this first jam.

148. “Jesus of Suburbia” – Green Day
When Green Day left that Gilman Street rat-hole to pursue bigger and infinitely better things, they had to do it with cries of “sell out!” ringing in their ears. No one gets more self-righteously pissed off than a snotty punk clique, and no one has “sold out” happier or more gloriously than Green Day. They never really wanted to be punk anyway, they wanted to be the new Who, and damned if they didn’t pull it off. The scope of their Townshend-esque ambition was staggering.  American Idiot (and its medley centerpiece) was the culmination. – holybeeofephesus

146. “Playboi Dream” – Kiss 1o8
An upbeat track full of forward momentum and exciting melodies to follow along with. – Vico Vault

145. “9 Milli Bros” – Ghostface Killah ft Wu Tang Clan
So good it feels like it could have been on Enter the 36 Chambers. Good to have the whole Wu-Tang on the list. – MeanOldPig

144. “Red Morning Light” – Kings of Leon
Kings of Leon hit the wall of bloated stupidity in record time, so their debut album may be the only gem in their catalog, and I’ll defend it against all late-coming “Sex On Fire” haters. Initially, some called them the “southern Strokes,” but I hear the more nuanced tones of the ’68 Stones in their DNA. (Too bad they’ve since turned into the ’82 Stones.) – holybeeofephesus

143. “Niggas in Paris” – Jay-Z & Kanye West
I won’t defend this song as a truly great rap song, or even my favorite track off Watch the Throne, but I am amazed at how big it got. For me it was one of those songs like Seven Nation Army was for some people: a crossover pop phenomenon that was inescapable. This track blew up tons of weddings, bar/bot mitzvahs, basketball games, it was everywhere, and I wouldn’t be surprised if it’s part of the pop music lexicon forever. I could pick any person I’ve hung out with in the last 15 years, and I guarantee you I’ve seen them sing along or dance to this song, or use a quote from it in conversation. I mean that shit is–fuckin’ ubiquitous! – tyrannoflores

142. “Outfit” – Drive-By Truckers
“Outfit” details the advice given to a novice rock star by his blue-collar dad (“don’t sing with a fake British accent…call home on your sister’s birthday” etc.) No one writes about family ties — and the experience of being in a band — better than the Truckers, and they lost a heavy-hitter when “Outfit” writer Jason Isbell left to pursue an acclaimed solo career. – holybeeofephesus

141. “Thunder on the Mountain” – Bob Dylan
Less a song and more a sonic collage of mid-20th century R&B tropes and idioms, “Thunder On The Mountain” chugs along, like a supercharged Studebaker kicking up dust, for a full six minutes of joy. Dylan’s razor-blade croak ain’t getting any easier on the ears, but I love the old rascal. – holybeeofephesus

140. “Stand Up” – Ludacris
When WH was a teacher, I went to visit him one time in the classroom and he was showing his students the video for “Stand Up” as an example of music video aesthetics. Even though I was older than most of those kids, I still wasn’t familiar with hip-hop, but that moment of being a teenager, in a school, intelligently talking about Ludacris, left a lasting impression on me. – tyrannofloresrex

139. “Is This Power” – The Field
This track has the main melody in the bassline. Not enough tracks do that! – Vico Vault

138. “Turn Down For What” – DJ Snake feat Lil Jon
Follow this link for my blurb. – djlazybear

137. “Throw Some D’s” – Rich Boy feat Polow da Don
The summer song of 2007, “The Little Deuce-Coup” of the 21st Century. There was a time when I avoided any chart-topping hip-hop, until my friend Birchel beat some sense into me with a stick. Richboy was the stick, and “Throw Some D’s” the revelation. – tyrannofloresrex

135. “Nights Off” – Siriusmo
Siriusmo can do a lot with a little. This track uses minimal instrumentation to develop a simple synth line to a throbbing, churning party machine. Vico Vault

134. “Somebody Told Me” – The Killers
The Killers were one of the front-line soldiers in the dance-rock revolution of the early ’00s. As indicated elsewhere, others in Idle Time prefer other tracks from the debut album, but this is the track that introduced me to them, and almost — almost — makes me want to dance. – holybeeofephesus

133. “Gotta Get Away” – The Black Keys
“Of all the Black Keys songs you could’ve chosen for the list, why this one?” someone kvetched at me. First of all, fuck you. Second, The Black Keys have de-constructed and re-constructed the two-man dark scuzz blues every which way, so this breezy slice of Steve Miller-ish AM radio gold actually feels like a breath of fresh air. – holybeeofephesus

132. “The Wild Hunt” – The Tallest Man on Earth
Turning 40 is weird.  It’s a whole lot of “where are we going, where have we been?”  Your life is basically half over and the world is going crazy.  How do you proceed?  This song sang me through the year. – djlazybear

131. “Two Lovers” – The Rural Alberta Advantage
I probably could have nominated any number of RAA songs for this list and, in fact, I changed my mind several times regarding which should be distinguished as my absolute favorite. But memories of an October show at The Independent sealed the deal: in the heat of another Giants championship run, with a throng of Canadian ex-pats at our backs crushing us against the stage and chanting in joyous unison, MMJ hearing every line of “Two Lovers” hoarsely sung from me and wonderfully performed by the band. It’s kinda become one of our songs. – MMDG

130. “Tsuxiit” – Islands
hltchk: “But, but Rough Gem!”
tyrannofloresrex: “I know, right? lol I’m a huge Whalebone fan meself, but I thought Rough Gem would make it, for sure.”
hltchk: “I’m not sure there are many other songs that are as good at carving a huge smile on my face as Rough Gem.”
IP: “You guys can add Rough Gem… or you can Tsuxiit!”

129. “Return of Evil Bill” – Clinic
The Clinic concert at the Great American Music Hall sometime in the fall of 2001 may be ground zero for this whole Idle Time thing. It was my first live music experience (and one of my first social outings) with MMDG, and I was treated to the full onslaught of his contagious brand of enthusiasm. Between his predictions of big beat making a comeback (it didn’t) and the opening band being destined for stardom (who were they again?), I bought a Fat Tire ale. Unwittingly, in the crush of the crowd, MMDG bought me one, too. I stood through whatever that opening band was, double-fisting a pair of Fat Tires. A friendship was cemented, and a pop culture collective was possibly born. In the end, it had little to nothing to do with a bunch of jackasses in surgical scrubs blowing into plastic tubing, but I’m glad I went. – holybeeofephesus

128. “Nothin But Godzilla” – Will Johnson
I imagine it is really difficult to write a unique love song.  WJ’s subject here is the value of a shared life.  From the mundane (setting a table) to the fantastical (fighting Godzilla).  “Most the time if it ain’t split you don’t like it like you could.” – djlazybear

127. “New York New York” – Ryan Adams
Its status as an over-obvious post-9/11 anthem (it was actually released on 9/11) shouldn’t overshadow its charms, and its showcase for Adams’ strengths: a mastery of good ol’ verse-chorus-verse songcraft and beautifully-layered production. – holybeeofephesus