Wow. I didn’t think this book was coming. Not that I wasn’t expecting a Trinity #1, but a DC superhero book that connects on a human level was a welcome surprise. These characters in capes and armor are manifestations of our fantasies, symbolic of the struggle between good and evil. But when written with care, they become as stirring a curiosity as the real people we encounter. Yes, I do like seeing Batman, Wonder Woman and Superman fight monsters and villains, but what an awesome feeling it is to feel like these characters have real humanity behind them. If universes collapsed, and people that were thought dead turned up alive, I’d expect someone to have some sort of existential crisis, but instead there’s been a lot of business as usual. To see DC’s big three sit down at a dinner table, to watch Bruce speak one way in front of everyone, yet wax sentimental in a moment with Clark, or seeing Wonder Woman confide in Lois because her sisters in Themyscira are lost to her –those are the kind of nuances that take these superhero books out of childish distractions and into the realm of thoughtful entertainment. 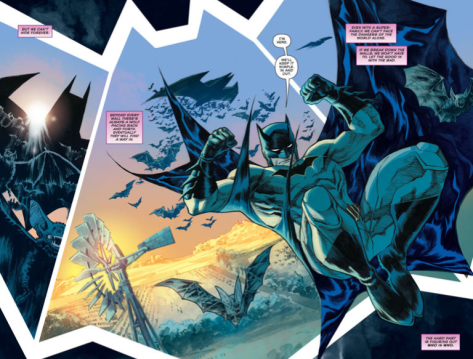 These three should sit down for a meal. They should wonder what it is to be the Holy Trinity in a world where informal gods run around in colorful costumes and the birth and death of universes is everyday business. And we should want to know what people like that think about their own lives, even if it’s essentially derived from ink and paper.

My hats off to Francis Manapul for a job well done. I gave Bryan Hitch some story slack for writing and illustrating the JL book, but now he has no excuse. Not only does Manapul have gorgeous looking characters and background design, but the panel layouts are super sharp. Get over the cloud of bats following Batman from the plane, and admire how it’s framed in the Bat Signal. His characters evoke the square jaws and proportions of Golden Age comic art, but his detailing puts really emotional expressions into the characters. I may be looking into it too much, but this book features a lot of people going through doors shrouded in light, people being separated by walls, glimpsing at each other through windows, unsure of how they’re connected, unsure of what’s on the other side, until we turn the page. I can’t wait to see how all these doors connect, and I look forward to turning many pages. 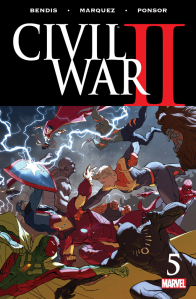 All New All Different Marvel: Week 51
We’re in the penultimate week of Marvel’s ANAD, Year One, and the dramatic clash between the divided camps of superheroes at the center of Civil War II #5 feels like major set-up for the Marvel NOW era that kicks off at the beginning of October. Unfortunately, it’s also starting to feel a little overwrought. Star-Lord, in battle with Iron Man, practically shrugs and cops to fighting each other “just because.” Editorial mandates driven by demands for Hollywood tie-ins may be to blame for Bendis phoning in the last few chapters of this event. Which is a shame, really, because the premise was solid, and the support books – Iron Man and Captain Marvel’s solo titles in particular – have done a much better job at debating the merits of preventative justice. So far this book is lots of shock and little substance. But, oh yeah… there’s a nice shocker to close out this issue too. – MMDG 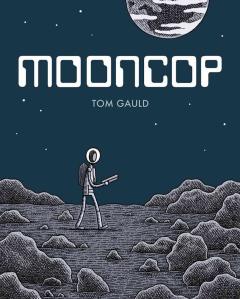 Other Highlights
Tom Gauld’s newest graphic novel, Mooncop, published by Drawn & Quarterly, may take place on the lunar surface, but it hits way closer to home than you might expect. The veteran cartoonist returns with his signature blend of humor and melancholy to tell the story of a lonely Mooncop, walking the beat and shuffling his feet. It’s a beautiful book that relates to our modern obsessions with technological advances, addressing the way we’re becoming increasingly isolated from one another despite living in a world that is racing towards hyper-connectivity. – MMDG