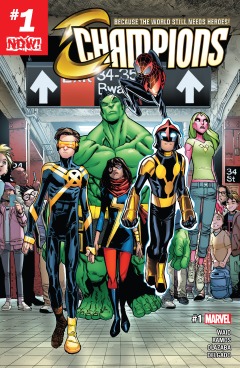 Champions is one of the most exciting new books to come out of the current crop of Marvel NOW! releases. Writer Mark Waid assembles a team featuring many of the most promising young new heroes in comics. Ms. Marvel, Nova, Spider-Man, Cyclops, Vision, and Hulk in their original incarnations would be exactly the sort of temporary superhero team that would last a year and fizzle out. Luckily for readers, Marvel, and Waid, have put serious effort into developing these new young heroes, finally giving them a team of their own. Miles Morales has become a worthy successor to Peter Parker. Nova, in much the same way, functions as a softer version of Richard Ryder. Ms. Marvel, hot off a top spot in Civil War II and featured in far too many team-ups lately, actually feels like a crucial member of the Champions team. Hulk, in this case the “Totally Awesome” Amadeus Cho, is quite different from the original, serving as both brains and brawn. Lastly is Viv Vision, an excellent character whose presence also manages to save the amazing Vision family from total comic book extinction, is a welcome addition, acting as the team’s Jarvis and Kitty Pride combined. Each of these heroes brings something new to the table, each one representing a new direction for Marvel, while also being reminders of heroes past. Champions is a book filled with legacy, a reaction to the superhero teams of old. It aims to be to the youth of today what X-Men was to the youth of the 80’s. 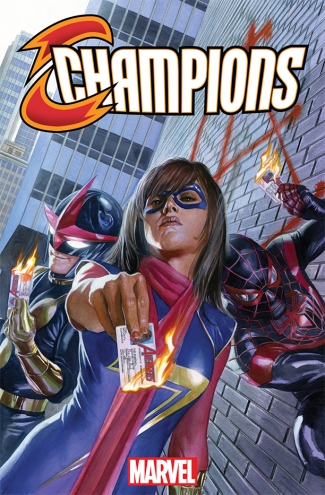 The first issue of Champions perfectly illustrates exactly how the team is so different. The book opens with Kamala Khan eating with her family, after having quit the Avengers in dramatic fashion when the team seemed uninterested in helping to rebuild the damage caused by their superheroics. She then decides to start a new team with Miles Morales and Sam Alexander, the current Nova. Soon Amadeus Cho and Viv Vision join, inspired by the Champions stated goal of helping people first, and punching other superpowered people second. What Mark Waid does best in this initial setup of the team is give them a reason to exist that also separates their ethos from that of the myriad other teams in the Marvel Universe. The Avengers protect Earth, Thunderbolts are baddies turned good, X-Men fight for mutants, and so on. To define the Champions so simply wouldn’t do the team justice, but essentially the concept is that the Champions are a millennial superhero team, “social justice warriors” without the unfortunate stigma that phrase carries with it.

All of this setup, premise, and cast of characters, is important, but ultimately a team-up book simply needs a good story. Thankfully Champions #1 has an excellent one. After assembling the team, the Champions use Viv Vision’s powers to discover a human trafficking ring operating at the port. They fly into action, cleverly using their powers to defeat Pagliacci. Unfortunately one of the women trapped in a shipping container dies before the Champions arrived. For a book ostensibly for teenagers, having a young woman murdered by a slave-trading clown is fairly intense. Waid uses such a serious situation to allow the Champions to show their true purpose. On live television the team decides not to kill Pagliacci, even though they recognize revenge is on their minds. Instead they leave the murderer to be dealt with by the authorities. The book ends with Ms. Marvel speaking as to the reason they chose to let the law take care of punishing wrongdoing instead of simply doing it themselves. While she speaks, several young heroes, presumably future members of the Champions, are shown in action, while the team’s popularity explodes on social media.

Champions has a great story, and great characters, but something else that also must be mentioned is the excellent art department, led by Humberto Ramos’s impeccable penciling. Victor Olazaba and Edgar Delgado round out the rest of the visuals, and do a great job giving the book a modern feel, while also maintaining a little old fashioned sketchiness. Champions #1 is a book full of promise, and having read the entire first arc, Mark Waid delivers on that promise. While most new superhero teams flounder or get stuck in an identity-lacking limbo, Champions comes out of the gate with a clear mission, a great cast, and a future worth looking forward to.