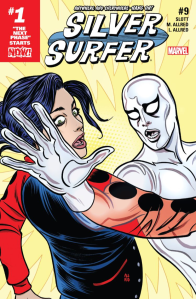 Dan Slott and Mike Allred’s Silver Surfer has been arguably Marvel’s most consistently excellent comic over the last four-plus years. Before Secret Wars, through the All-New All-Different relaunch, and into the Marvel NOW! era, the adventures of Norrin Radd and Dawn Greenwood, from the salty coast of New England to unexplored new regions of the galaxy, have reminded us how fun comics can be. Issue #9, one of the last books to carry the NOW! label, appropriately establishes the book’s characters and tone for a new audience, while tantalizing long-time readers with a much-anticipated new chapter in these starfarers’ journey. We were promised “everywhere and anywhere,” and from one corner of the cosmos to another, the quest to uncover the human soul of the Surfer has been even more rewarding than we could have hoped.

Silver Surfer debuted in the pages of Stan Lee and Jack Kirby’s Fantastic Four in 1966, the same year Star Trek premiered on NBC. The connection hasn’t been lost on me, as these recent volumes of Surfer have captured so much of what I love about that original Trek series. It’s campy and colorful, but nonetheless full of mystery and wonder. And this character lends himself so perfectly to that type of story: he’s admittedly a goofy concept, all plated in chrome and riding a surfboard across space, but there might not be another superhero in comics who takes himself, or his purpose, so seriously. In the first NOW! issue, a standalone tale of cosmic intrigue, Surfer and Dawn encounter a planet of people who don’t poo. Freaking silly, but fun! And it’s a bonafide mystery, tucked inside the ongoing quest to kindle the light of humanity within the once lonely last son of Zenn-La. 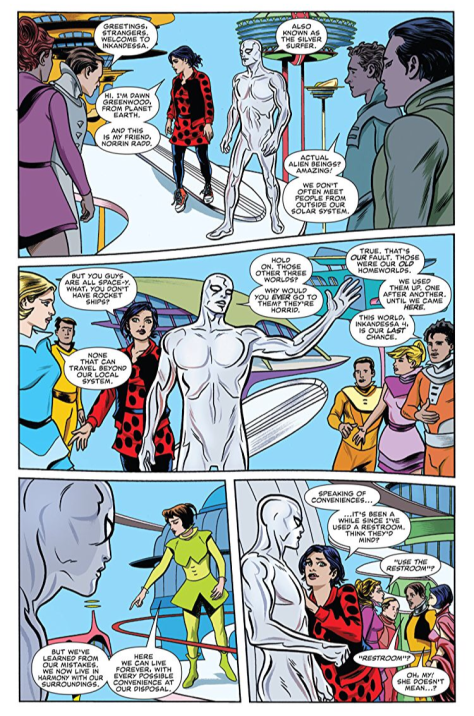 One of the reasons this book has been so good is that it has been allowed to exist within its own cosmic universe, tied into the greater Marvel canon, but free of the tethers and tie-in mandates of any of the recent “events,” like Civil War II or IvX. Having said that, issue #10 reminds us that we are still playing in the Marvel sandbox: the Surfer meets his old master, who has been transformed, in the recent pages of Ultimates², into Galactus Lightbringer. This, too, is a wonderful standalone story that pays homage to the fantastic Lee/Kirby/Ditko sci-fi legacy, while moving forward the Dawn & Norrin storyline that has been building for years. And before you continuity junkies and novel-length funnybook fans dismiss the elegance of one-shot stories done well, pick up this week’s issue #11 as the lurking menace of Warrior Zero finally makes his presence known.

Dan Slott may be more well known as the Spider-Man architect, and he’s certainly had his hands full coordinating Peter Parker’s problems over the years, but his work on Surfer, free of the aforementioned editorial restrictions, seems to be a far better showcase of his creativity. Moreover, partnered with a master storyteller like Mike Allred, Slott has opportunities to do things we just don’t see in mainstream comics, like the Eisner Award-winning Moebius homage from a few years back. And there’s not much more I can say about Allred. I have an annoying habit of comparing the work of new artists to obvious influences or corollaries. It’s lazy, I know. But the Allred Art Team, Mike on linework and wife Laura with the colors, has been unmistakably unmatched for decades. It’s one of those you-know-it-when you-see-it deals; you know it’s Allred, and you know it’s fantastic.