I’ve often thought Thor is the most out of place character in The Avengers. Bringing Norse mythology into the Marvel U always seemed like a commercial ploy – a way to get another Marvel book on the shelves without the creative pressure of having to write an original character. Of course, that’s not the whole truth, since myths and legends are kind of the original superhero stories. Jason Aaron has a firm grasp of that idea, and in the latest Marvel NOW season of The Mighty Thor, he and artist Russell Dauterman use the classic “trial of the gods” trope to further develop the Jane Foster-Thor, while creating some amazing visual opportunities.

Jason Aaron may be one of the best fundamental comic book writers in the game. This arc of Thor has a feel of a classic silver age conflict, but with more finesse. His dialogue doesn’t over-explain, the story’s acts are evenly paced, and he lets Dauterman’s drawings do plenty of exposition. 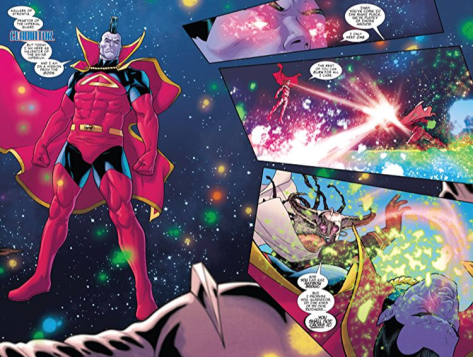 When issue 15 (the first in the NOW! season) begins, Aaron quickly reestablishes that a cancer-stricken Jane Foster is the wielder of the magic hammer Mjolnir, and her presence among the gods of Asgard is tenuous. Odin is out of the picture, and the new head of the gods, Cul, doesn’t think lady-Thor has what it takes to be a god, despite her stopping a plot from the evil dark elf Malekith, and establishing new diplomatic relations between the beings of the various dimensions of the Marvel universe. Luckily for Thor, the gods of the Shi’ar Empire (remember them!?) want to challenge her to see who the best god is. The leader of the Shi’ar, Gladiator, kidnaps Thor and brings her to the husband-and-wife gods of the Shi’ar for a series of trials to see who is worthy of being worshiped. Aaron’s background as a Baptist turned Atheist comes out as the story progresses, as Jane explores what it truly means to be a god, and the relationship people have with religion.

Though the commentary is interesting, what really makes this book stand out is the art. I feel like it’s been forever since I’ve seen the Shi’ar, and Dauterman’s drawings make those overlooked characters of cosmic Marvel look better than ever. When Thor is kidnapped by the Shi’ar, Asgard goes after them, and this arc is filled with Norse boats flying through space, Shi’ar battlecruisers shooting tons of lasers, and that makes for a ton of great action panels between the two sides. The fight between Heimdall and Gladiator that opens the arc is just a hint of what’s to come, because the action sequences only get bigger from there. I was not surprised to learn that Dauterman used to be a costume concept artist in Hollywood before turning to comics, because literally every character has a vibrant costume, which Dauterman beautifully colors himself.

Like I said, this book has great control over the fundamentals of comic storytelling. Though the commentary is interesting, this book is mostly straightforward entertainment with tons of action and cool stuff to look at. Aaron and Dauterman brought Jane Foster to the forefront of the Thor books, and this NOW launch should not only please fans of the book, but make some new ones.