It didn’t take long following Marvel’s All-New All-Different relaunch for the company to tease information regarding another “things will never be the same again” initiative. There was bound to be some fallout from last summer’s major crossover event, and the new season of books and fresh storylines was geared for a Marvel NOW! branding. No, this wasn’t the same Marvel NOW! slate that followed 2012’s Avengers vs. X-Men event. This was an all-new, all-different Marvel NOW, if you will. I mean, look at that shattered and distressed NOW logo. Totally different.

In the same way that 2015’s Secret Wars set the stage for All-New All-Different universe, Civil War II was meant to segue into these Marvel NOW titles. And, in the same way that Secret Wars scheduling delays detracted from the initial ANAD offerings, major lags in CW2 meant that Marvel NOW! releases were rife with spoilers. And, sure, we Idlers bitched and moaned with the rest of the comic book community. But that didn’t mean we weren’t excited to read, rank, and review another stack of new books. In fact, the first month of this “shattered” NOW! initiative gave us some of the most promising superhero books in years.

This wasn’t a complete overhaul of Marvel’s comic book line, however. There were plenty of brand new series, like ANAD the year before, but most of Marvel’s titles continued their numbering with an additional NOW! indicator to draw attention to a new arc or post-CW2 storyline. Because of that, we had to be a little selective regarding which books our focus group would be evaluating. 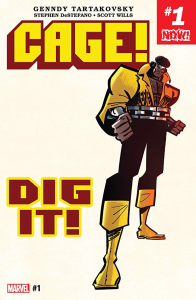 Mini-series don’t qualify, so great comics like Cage and gawdawful ones like Man-Thing were excluded. Some families of books were involved in their own affairs during the NOW! launch: even though Spider-Man had the Clone Conspiracy going on, Prowler and Renew Your Vows both debuted with NOW! labels, so they were considered. The X-Men, on the other hand, were duking it out with the Inhumans, and all those reboots and fresh starts were primed for this month’s RessurXion. So, no X-books in our rankings.

Some series that debuted during the ANAD era never saw a NOW! imprint, so, even though they kicked off new arcs within the last six months, we excluded them as well. Notable books that fell under this category are Totally Awesome Hulk, Silk, Spider-Gwen, The Unbeatable Squirrel Girl, and Scarlet Witch. Finally, a few new books came out recently, after our ranking cutoff date. So you’ll have to wait a little longer to hear how we feel about books like Nick Fury, Ben Reilly, and Monsters Unleashed.

Having said all that, we’re still looking at a list of 56 comics for focus group consideration. Which new books or storylines hooked us, and had us excited for more? And which ones didn’t seem worth the paper they were printed on? Here’s our countdown, from worst to first!