X-Men: Gold feels like an X-Men book. That should come as no surprise, but with Marvel’s current emphasis on huge crossovers and Inhuman conflicts, the X-Books have been left on the back burner. As a longtime fan of the most allegorical team in superhero history, it feels amazing to finally have some X-Men comics that feel like the stories of old. From page one, Marc Guggenheim is telling a classic mutant story. The team is in the middle of Manhattan, fighting Terrax, being judged by the crowd of onlookers even after saving their lives, usual X-Men stuff. That’s just it though, usual X-Men stuff has been so thoroughly disregarded that just having an issue begin like one would expect is actually a massive shock. The simplest way to explain why X-Men: Gold is so good is the last page of the first issue. The team is face to face with a mysterious threat, strange beings who reveal themselves with an immortal line, “We’re the Brotherhood of Evil Mutants.”

This is exactly what X-Fans have been craving, and exactly what Marvel has been shortsightedly withholding from them for years. Thankfully this ResurrXion event has been quite successful in bringing X-Men stories back to where they belong. Aside from simply being fan-service though, the inclusion of the Brotherhood, and more importantly their outright admittance of being “evil mutants,” suggests a retreat from the endlessly gray morals of recent X-Men stories and a return to good against evil. Simple storytelling isn’t always good, or necessary, but when characters have strayed so far from where they belong, a simple story is the best way to bring them back.

X-Men: Gold is first and foremost a comic book though, and as such the story is only one facet. Another place X-Men: Gold succeeds is in its art, penciled by Arden Syaf. Though not every character looks the same from panel to panel, every panel is well laid out and the action is clear. Syaf has a style reminiscent of Leinil Yu, who always drew the X-Men very well, and the color work by Frank Martin helps Gold feel distinct from Blue, focusing on oranges, yellows, and reds. 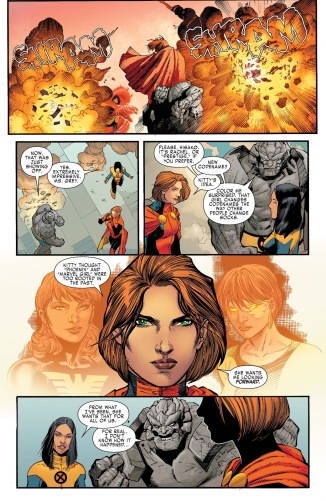 Marc Guggenheim also has a few changes of his own to make to the classic X-Men lineup. The most notable change for lapsed X-Fans is that Wolverine is now Old Man Logan, even grumpier than before. While the character appears in far too many of the ResurrXion books, his inclusion in X-Men: Gold feels the most necessary. X-Teams have always worked best with a strong leader, and Wolverine at their side to both question and support them. Another big change is that the strong leader of the Gold team is Kitty Pryde, a character long overdue for a meatier role. Kitty hasn’t lost her comedic edge though, and Guggenheim is sure to remind the reader of her immense power by having her phase an entire building through the ground in the first issue. The last major change to the lineup is Prestige, the new nom de guerre of Rachel Grey, which comes complete with a fresh costume and an aggressive attitude. While Prestige as a name doesn’t feel like it will catch on, the costume and writing help sell the change.

Overall X-Men: Gold is a treat for X-Fans and newcomers alike. It has everything that a classic X-Men story needs, good mutants, evil mutants, jokes, and explosions. It has allegories to racial bigotry, it has Danger Room training sessions, it even has a quick appearance by Armor! Even if ResurrXion had been a failure, the adrenaline shot Gold has given the X-Family justifies the entire venture.

One final note, Arden Syaf was removed from the book after three issues for using his art to promote religious intolerance in his native Indonesia. The irony of including messages of hate in an X-Men book is impossible to miss. Thankfully R.B. Silva is brought in at issue four and does an excellent job retaining Syaf’s visual style. Marvel absolutely made the right call removing and firing Syaf and wisely edited the first issue. Even though I would rather not bring attention to such things, intolerance has no place in comics, and sure as hell has no place in the pages of X-Men. But let’s leave things on a high note. X-Men: Gold rules!