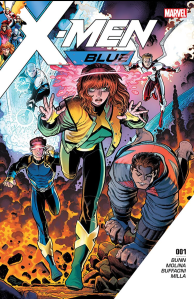 I really enjoyed the first issues of both Astonishing X-Men and X-Men Gold, but these last few months I’ve seen a consistency in the quality of writing and art in Blue that sets it apart from the other solid X-Men books. While each one has its own roster of celebrity X-Men, Blue’s team hits at something elemental in the franchise, focusing on the original five-person roster from the seminal Kirby/Lee stories. Cyclops, Jean Grey, Beast, Iceman and Angel were all sucked from their original timeline in 2012 as part of the All-New X-Men title, and in Blue, writer Cullen Bunn skillfully juggles the relationship dynamics and Civil Rights commentary that are a signature aspect of good X-men stories, while also dealing with the challenges that arise when time travel and alternate universes are involved. The way all these separate facets of the current X-men universe are combined into something narratively cohesive, as well as the great artwork by Jorge Molina, makes Blue one of the most rewarding capes ‘n’ tights books I’ve read in awhile.

What makes this book stand out from the other X-titles is how the subsequent storylines reinforce the character arcs and themes introduced in the first issue. Magneto’s role as the X-Men’s benefactor is a device that’s been used before to subvert the familiar in X-books, but by pairing the historied Magneto with the team of inexperienced original X-men, Bunn has the opportunity to look at covered ground from a different perspective. Not only is the issue of trust a factor between the former foes, but whether or not people have the power to change and shape their own destiny is a huge question for all of these X-Men. While they struggle with their decision to trust the reformed Magneto, they encounter the future Sentinel, Bastion, who has also changed cosmetically, but is later revealed to have more sinisterly convoluted plans than ever before.

The way this X-Men series is preoccupied with reinvention seems like an interesting meta-reflection from an author dealing with characters that have over fifty years worth of stories. Bunn’s work borrows from past X-Men tropes and in the best way revises or repurposes them into something exciting, yet familiar.

The most recent issues of X-Men Blue (before sidetracking into this Secret Empire biz) have featured Jimmy Hudson, the son of alternate/Ultimate Universe Wolverine, who has been displaced in the X-Men’s universe. Throwing in a Wolverine character could be argued as a gimmick, shoehorning a version of the most popular character in the franchise as a way to boost appeal. But Bunn’s Jimmy Hudson has so much in common with these displaced mutants. He, too, is pulled from his own universe and forced to deal with a new reality, one where his purpose and destiny is unclear. In this way, Hudson relates to this team of X-Men in a way the original, brooding-loner Wolverine never could. All of these are just a few of the examples of how well Bunn is handling his material. He understands how the teenage personalities of his characters and their relationships are the emotional core of the books and enriches this tried and true young adult drama situation with the details specific to their epic history. Bunn’s pacing between action sequences and character development in each issue is even-handed, spending time growing each character all while moving a larger plot forward.

While the writing gives a fresh take on the classic X-Men, Jorge Molina’s art renovates the look and tone of the characters. His designs are as bold-lined as Jack Kirby’s first illustrations, but with more rounded strokes. Molina has given Cyclops the best haircut he’s had in years, and his take on the Juggernaut has an apocalyptic-automotive quality about it that looks really cool. The bold colors, worked by Mike Milla, give the costumes and the exotic surroundings a glossy quality. The expressions and posing during action sequences, or when someone’s powers are used, look awesome, and I especially like the mood and colors of Beast’s magic-related scenes. Julian Lopez, Matthew Buffagni, and Ray-Andrew Height are just a few of the supplementing artists keeping the book on schedule, each succeeding at carrying on Molina’s template to varying degrees of success. Though they don’t all have the gloss of issue one, all of the art is solid, with Height’s coming the closest to feeling a bit out of place, in my opinion. This book lacks the grittiness of Astonishing or Gold, but Molina’s cartoonish style is still expressive and capable of effectively switching between explosive super hero antics and serious, moody panels.

Anybody who loves the X-Men and their corner of the Marvel U should be happy with RessurXion. The three main X-Men books all started off really strong, and a lot of the other books launched in this event are pretty solid, too. However, issue after issue, Cullen Bunn’s X-Men Blue has an understanding of its characters and history that so far has translated into a few compelling arcs. “Blue” was a team designation during the Jim Lee era of X-Men, one of the most popular in the franchise’s history. Though it may not be hitting the same sales numbers, the ideas and execution of X-Men: Blue does right by the legacy, and thanks to its creative team, I think it’s just a step above the rest.