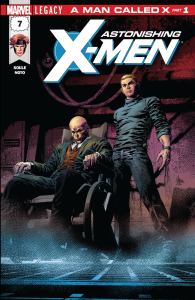 Fourteen weeks into the Legacy initiative, Marvel publishes the 53rd and last of its promoted title launches with Charles Soule and Phil Noto’s Astonishing X-Men #7. This book had been one of our favorites when it was launched at the tail-end of RessurXion because of the smart writing, slick art, and excellent team dynamic, and now, wrapping up the glut of Legacy releases, it serves as a good reminder that the future of Marvel Comics may be far more reliant on the marginalized mutant branch of the superhero tree than the company realized, or would care to admit.

There are a precious few of us longing for the return of Reed, Sue, and the Fantastic Four proper (although Zdarsky and Cheung’s new Marvel Two-in-One is keeping us pretty happy). And there are more than a few of us rolling our eyes every time another top-tier character dies or is otherwise melodramatically shown the door (stay dead, Mar-Vell). But there is likely a very large number of casual post-Claremont fans who have either grown up with the X-Men cartoon, discovered the characters in Bryan Singer’s movies, or have a fond remembrance of X-books of the 90’s who don’t understand why there are so many damn mutant books on the stands, with not a one of them featuring a certain bald telepath.

Professor X has died and come back a lot, even for a superhero. And despite writers’ best efforts to make this last one feel more definite — offed by Cyclops in Avengers vs. X-Men, dying brain stolen in Axis, said brain vaporized in Uncanny Avengers — we all knew it was only a matter of time before Charles Xavier was rallying the X-Men to his side once again. And although we comic fans tend to be a bit jaded when it comes to deaths, we always appreciate a good resurrection story.

Act II of Soule’s Astonishing epic kicks off with this Legacy issue, and the return of a “Man Called X.” The back-from-the-dead details may not crack our list of all-time revivals, but this new arc does involve The Shadow King, a certain goofy Grant Morrison creation, and some decidedly sinister undertones. In other words, it’s very X-Men. Also, this new Professor X, if he really is Professor X, gives Angel the ability to control his Archangel form without succumbing to the crazy kill-everything personality. So that’s something new.

It remains to be seen how Marvel aims to regain its footing in the comics world. This first wave of Legacy, by all accounts, was wildly unsuccessful, resulting in poor sales, internal strife, and reader disillusionment. There are some bright spots on the horizon in the next wave: a spate of excellent mutant books welcomes the addition of X-Men: Red and the resurrected Jean Grey. I’m really excited that one my new favorite writers is bringing a Tessa Thompson-inspired version of one of my favorite characters to the new Exiles book. And not for nothing, but I sure did love the Legacy lenticular covers. I just wish the physical book made it easier to appreciate the homage cover.