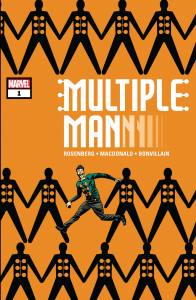 I’ve become a big fan of Matthew Rosenberg in recent years, and was thrilled when he started doing work for Marvel. In the process I have also become appreciative of the publisher’s technique for breaking in new writers; a number of entertaining and well-received mini series (including New Mutants: Dead Souls and Phoenix Resurrection) followed by a toes-in-the-water mixed bag of runs on some fringe monthlies (like Punisher and Secret Warriors) before he gets to cut loose on a high profile series. Later this month, Rosenberg joins veteran artist Greg Land as the creative team for a new era of Astonishing X-Men. And anyone who’s read the aforementioned mutant books can see that the guy is an adept student of X-history; I’m expecting to break out the Marvel Universe Guide To… with his very first issue.

But before that drops, we’re treated to an unexpected “Fresh Start” mini-series. Similar to the Quicksilver: No Surrender mini, which didn’t seem like it needed to exist (and hasn’t changed my mind over the course of two issues), Multiple Man #1, by Rosenberg and Andy MacDonald, has taken a character very few of us expected to hear from again so soon (or maybe even had forgotten had been killed off), and made him the focus of a thoroughly entertaining Madrox mystery.

Despite having been a victim of the M-Pox during the mutant-Inhuman conflict, Jamie Madrox has returned, with his marvelously maddening multiplicity intact, immediately wreaking havoc at the mansion. 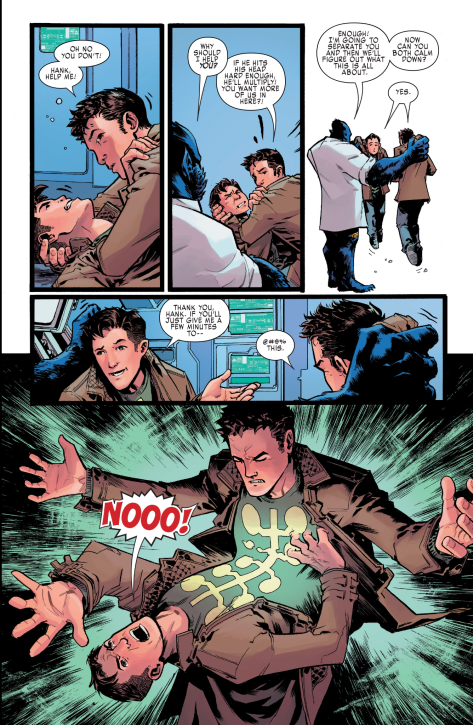 Rosenberg taps into the disparate personality aspect of Madrox’s power, beautifully utilized during the height of Peter David’s X-Factor run, and throws in the added wrinkle of time travel to help explain away Multiple Man’s resurrection. At this point we’re all a little jaded by the forced gravitas surrounding back-from-the-dead stories. Hell, we’re even tired of time travel being used to facilitate super-returns. But with this character, particularly given Rosenberg’s knack for witty dialogue and sense of character development, we could care less. The wilder the better, and the more improbable, the more entertaining.

Andy MacDonald matches Rosenberg’s pacing with outstanding layouts, dialed in for humor and ramped up on the action. And when it comes down to this issue’s quirky twist, his character designs for the next piece of the puzzle are far more imaginative than those goofy “Infinity Warps” being teased for later this summer.

Also this week, a fresh start for another remember-me character with The Sentry #1 by Jeff Lemire and Kim Jacinto. 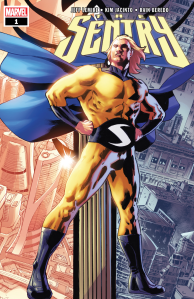 As excited as I was to see Lemire’s name back in the Marvel solicits, I was, at first, a bit thrown off that this was the project bringing him back. I’m a little embarrassed that it didn’t dawn until me until I’d read this first issue…

Ask the prolific Eisner-winning Lemire, whose recent successes include a love letter to Golden Age superheroes, Black Hammer, and various journeys into the fractured psyches of humanity, both powered and otherwise, as seen in Royal City and Bloodshot, who is the one Marvel character you’d most like to revive? Moon Knight. Okay, you’ve done that. Who is the next Marvel hero on your list?

Gotta be The Sentry. This first issue is rife with classic capes n’ tights bombast, juxtaposed brilliantly with real human struggles — a Robert Reynolds that looks like he was pulled fresh from the towns of Essex County. In fact, Kim Jacinto’s art, when it isn’t aflame with dynamic action sequences, even resembles Lemire’s illustration style, sketchy and expressionistic with every shade of human emotion wonderfully styled.