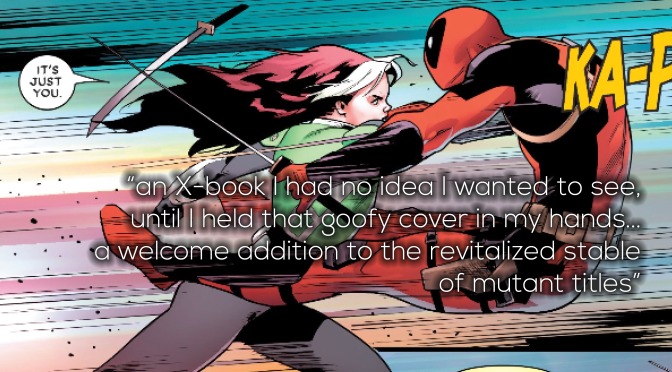 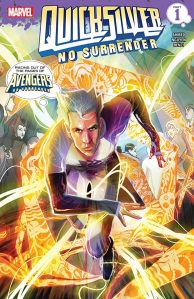 This could be an intriguing physics adventure and I’ve always wanted to move through time like Mork, but I bet this will be stupid. The art is unique – always a welcome sight – with some panels looking like pop art. Other entire pages are bland and skimmable. – lebronald

Not sure how to feel about this – like Ahmed’s work and I’m a fan of Nguyen’s art… just not sure why we needed a Quicksilver mini. And this first issue did nothing to answer that question. – MMDG

Amusing concept for an unremarkable character. I have a general antipathy for all of the Liefeld creations, but at least in this book Seeley (who surprised us with his Nightwing series for Rebirth) is focusing more on the Mojoverse/multiverse promise of Claremont. I’ll read through. Also, thanks for writing a series starring a gay superhero that doesn’t feel the need to remind us that he’s gay every other panel (looking at you, Sina Grace). – MMDG

Never heard of this guy and had no plans on getting #2 but I like the premise. These old multi-parallel-reboot-universes definitely need some clean-up crew storylines. – lebronald

A marvelous demonstration of an accomplished writer’s first full-time, ongoing comics gig. Okorafor’s dialogue is smart and well-paced, and she has a clear fondness for this character. Elements of technological wizardry are ably woven through a fabric of cultural mysticism and tradition. Together with Coates, Okorafor is helping expand this already rich corner of the Marvel universe. She’s also helping renew my faith in the company’s months-old promise of “new beginnings.” – MMDG

I want to like the art since something that deviates from the norm is always more exciting, but I don’t. It looks like an early 80’s throwback in all the worst ways. Shuri is a fun character, however, so could be as good a run as big brother’s book. – lebronald

Feels like a nice buddy cop romp through the microverse. They could probably invent all kinds of psychedelic adventures with laughs. – lebronald

Despite being a forced effort to generate rack appeal before the movie, Marvel assigned this book to a top-notch creative team, and the result is a fun, beautifully illustrated adventure. Will read through. – MMDG 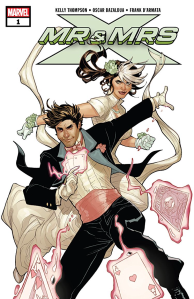 Fresh off an Eisner best-series nomination for Hawkeye, Thompson brought her brand of sharp, witty dialogue woven through a fun fast-paced caper to the Rogue & Gambit: Ring of Fire five-issue series. When a creator cares about certain characters as much as Thompson does these two off-again, on-again lovers, it shows. The follow-up is an X-book I had no idea I wanted to see, until I held that goofy cover in my hands. This is a welcome addition to the revitalized stable of mutant titles. – MMDG

Mystique is Rogue’s mom? Jean Grey died? You leave comics for just a couple decades and they slip in all this craziness. The story and art were both good, but nothing grabbed me enough to keep reading. At least DC had the cojones to show #BatDong. Gambit and the sheet was too PG for me. – lebronald

Maybe the most ingenious thing about Tony Stark is not his ability to design new mechanical armor, but his ability to reinvent himself. Slott’s take fits the current technology scene in America, with Tony seeming like a more collaborative, long-term Silicon Valley innovator than a domineering CEO. Whether or not the “We Are Iron Man” actually implies other characters besides Iron Man will actually drive the plot of this book has yet to be seen, but it’s at least an exciting sentiment. I love seeing Fin Fang Foom come out of the ocean and I’m all for an anime-style giant robot kaiju fight. The Controller is about as exciting as his name suggests, but overall the book’s humorous writing and good-looking images provide strong hooks. – tyrannofloresrex

Funny thing about Valerio Schiti… hated his art when he filled in for Dauterman on Thor. But that’s because he was filling in for Dauterman on Thor. He’s gold on this Iron Man relaunch, from Iron Mechs to Fin Fang frenzies and all manner of quiet spaces in between. I’ve been looking forward to seeing Slott lay anchor in another book — loved Spider-Man, but saw how much more he can do in a different sandbox during his Surfer run. Seems like the start of grand things for Stark & The Gang. – MMDG

Pretty good. I usually love the Stark side of Iron Man but this rendition is a little too far on the “I-can-do-anything” spectrum. It’s more fun when the engineering challenges are previewed, contemplated, and solved. I like the A.I. moral dilemma that might be a long part of the series. And the Controller is ominous enough for my liking. – lebronald

A lot of fun. Cates has quickly risen up the list of trusted Marvel scribes, trained in the Jason Aaron school of wry humor and epic bombast. Some of his stuff has come across as too joke-y at times, but this little GR/Baby Thanos tale has the right amount of offbeat irreverence. It’s everything your average Deadpool book wishes it could be. – MMDG

I love it! I really liked Multiple Man in the Peter David X-Factor series from a while back, and I was sad to hear that Madrox was gone. Rosenberg’s resurrection is already using the possibilities afforded by Madrox’s power in an interesting way. The duplicates have this magic act quality about them, and it seems like Rosenberg is fully aware of how to use bait-and-switch and misdirection. Adding time travel to a story which makes you question whether or not you’re dealing with the main character or a duplicate adds another dimension to a puzzle that’s already fun to figure out. MacDonald’s designs for the X-men look awesome, and his time-traveling duplicates incorporate great looks from other characters in the MU. From the first issue, I got high hopes for the series. – tyrannofloresrex

I love Rosenberg’s writing, and I’m beginning to appreciate the way Marvel is weaning him towards the big time with a smattering of mini series (which he’s been great on — Rocket, Kingpin, New Mutants — while testing his ability to work on a monthly (with mixed results — Secret Warriors, Punisher). But this MM mini could end up being the best thing he does for Marvel… until he takes over on the Astonishing X-Men title. Finally, the mutant family of books gets a young, hungry writer with chops. – MMDG 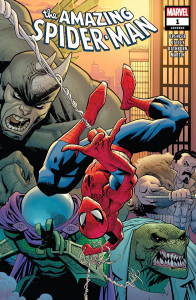 My favorite so far. In general the art in all of these books (my local comic guy says “enjoy your books” – suck it rengstorff, I am reading books) is way better than I remember from the 90’s. It’s been a while for me and I can look at some of the large panel battle scenes in this book for a solid few minutes. Spidey’s story is always going to be timeless and this seems like a good rendition so far with some good laughs and twists. – lebronald

I’m not a big fan of Ottley’s art, but, if the goal was to find someone who can produce quality illustration and layouts on a twice-monthly schedule and he doesn’t draw like Mark Bagley, I’m okay with it. I’m not not going to read ASM. And while I wasn’t blown away by Spencer’s initial issue (something felt a little too juvenile), I’ll stick it out. Among the three “bombshells,” the only one of mild interest was Professor Lizard. Back-pedaling on “One More Day”? Eye-roll. – MMDG

This book’s idea of a fresh start is to just clear the plate and go back for seconds. Though I’ve seen a Peter Parker with the world against him multiple times, I have to say this issue does a great job of riling up my sympathies for Petey. Anytime Peter and MJ reunite, I get misty. Ottley’s art is not jaw-dropping, but Spencer has a good idea of what Spider-Man is about, which makes the book fun to get through. Spencer’s revamp of Mysterio is exciting, and this Swarm-like character and The Lizard teacher are nice touches, too. If the art looked a little less elementary, I’d say this was an A+ first issue. – tyrannofloresrex

This is a great looking book! Cabal is helping me look at X-23 in a way I haven’t before. I was never too sure if the female Wolverine was a gimmick or a meaningful addition to the MU, and it seems like after a few years, the Marvel team has carved out a nice little spot for her. The theme of a unique mortality is strongly explored thanks to Tamaki utilizing the Stepford Cuckoo clones in this story. The physicality of the Wolverine clones against the scheming mentality of the Cuckoos has a lot of dramatic potential, and I really like the sister relationship between Laura and Gabby. In just one issue there are a lot of complications to unravel, which should make this story a really fun read. – tyrannofloresrex

Oh shit – did not expect to enjoy this. I knew Cabal’s art was going to be top-notch, but I had no idea how adept he was at the quiet moments — facial expressions, comedic timing. Tamaki’s script has taken characters I only mildly cared about and fashioned a legitimately entertaining mutant storyline. The characterization of Laura and Gabby is great, but what I really didn’t expect was the level of intrigue surrounding the Cuckoos’ development. Unexpected add to my monthly pull list. – MMDG