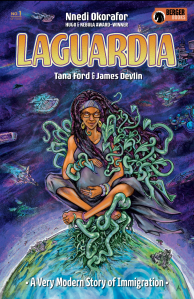 Stories of extraterrestrial emigration to our beautiful blue planet are nothing new, particularly in recent years when the question of alien identity has become such a hot-button issue. Comics like Port of Earth and Border Town address the varying degrees of xenophobia that continue to simmer forth, putting our preservation and admiration of diversity ever more on the defensive.

The first issue of LaGuardia, by Nnedi Okorafor with art by Tana Ford and James Devlin, immediately sets itself apart from any sci-fi allegories of immigration. In this near-future world, Nigeria was the site of extraterrestrial first contact, and Lagos now operates the most important interstellar airport on the planet. The country, furthermore, has benefited greatly from its early communion with otherworldly species, and advancements in science and technology are ever-present.

But controversy is inescapable, and secessionists recalling the Nigerian Civil War amass, violently opposed to the influx of alien races and influence. Nigerian-American physician Future Nwafor Chukwuebuka arrives in New York City via LaGuardia, now the only interplanetary port in North America, pregnant and intent on smuggling in a mysterious little plant-based alien lifeform who adopts the rather loaded appellation of Letme Live.

The art is as wondrous as the story, vibrant and immersive. Imagine landing in LaGuardia and being beset by fantastic sights and sounds, and trying to take it in all at once. Many of Ford & Devlin’s layouts capture that very sensation. There’s a marvelous spread early in the story, while Future is waiting in a security screening line, that features not just a diversity of extraterrestrial species, but points out the wondrous cultural diversity within our own human species. It’s a striking scene, and one that, in reading Okorafor’s afterword, was inspired by real-life events.

What struck me most and immediately about New York was its glorious diversity… Nevertheless, what made the strongest impression on me was the first next-level TSA experience I had while leaving through LaGuardia… I walked away from that first experience at LaGuardia furious, but also thinking about many things. About aliens. About people of African descent with our alarm-raising thick African hair…

Okorafor, a Hugo and Nebula Award-winner, has already proven her comic book chops with several Black Panther stories and the new afrofuturist epic-in-the-making Shuri. LaGuardia, one of the first books under Karen Berger’s new Dark Horse imprint (how many funnybook editors can you think who rate their own freaking logo?) is replete with political messaging, sure, but also entertaining elements of science fiction mystery and intrigue.

More picks this week:
In the spirit of Tom King’s Vision and Miracle Man series, Steve Orlando’s new Martian Manhunter twelve-issue tale looks to be a beautifully intricate reexamination of the character. I re-read the beginning a few times to make sure I understood that, yes, J’onn J’onzz was, in this version of his story, a seriously corrupt officer of the law back on Mars. And the memories and turmoil that have carried over into his current career as an earth-bound detective make for the perfect blend of superheroic fantasy and hardboiled crime fiction. Plus, the art by Riley Rossmo is, well… out of this world. The Martian sex-blob splash is worth the price of admission alone.

The original Defenders are back in a fun little format of one-shot stories. The first two, out this week, feature The Immortal Hulk and Namor.

The Hulk story, written by regular gamma-scribe Al Ewing, is every bit the E.C. horror-inspired tale of his excellent ongoing series. The Sub-Mariner book, written by Chip Zdarsky with incredibly intricate art by Carlos Magno, like Okorafor’s LaGuardia, raises the issue of xenophobia by introducing a long-lost race of ocean-dwellers, who may or may not feel a welcome hand of invitation from their Atlantean brethren.

The story continues with two more self-contained stories next week, Silver Surfer and Doctor Strange, before weaving it all together for Defenders: The Best Defense.